Not too long ago my gf bought a groupon to Jane's Restaurant in Bucktown due to its close proximity to her place. She figured it'd be nice for a night when we wanted something to eat and could easily walk on over when hunger hit. I've driven by Jane's countless times and seen them on groupon almost as many. When driving by at night I usually notice a nice crowd so I don't think they're on groupon because their struggling, I think they do it to boost business even more.  It's a nice neighborhood spot that serves American contemporary comfort food. 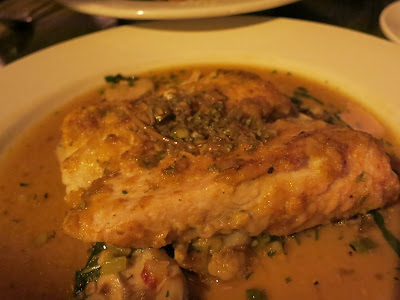 From the dinner menu we tried the seared black grouper with bok choy, water chestnuts and shiitake mushrooms with a sake ginger soy sauce. Honestly it sounded alot better than it was. I was expecting to be taken away but was left disappointed with the flavors. While the fish was really fresh and nicely prepared the sauce just didn't pack the punch I was expecting. I wasn't disappointed in the dish as a whole but wasn't left wanting more either. The Spicy Angel Hair Pasta with grilled chicken, cilantro, spinach, tomato, chipotle pesto and cojita cheese was the same way. Not bad just nothing to make me say "let's go back" and pay full price for that. With the groupon though it made for a nice reasonably priced meal that was convenient on a  night where we just wanted something near. 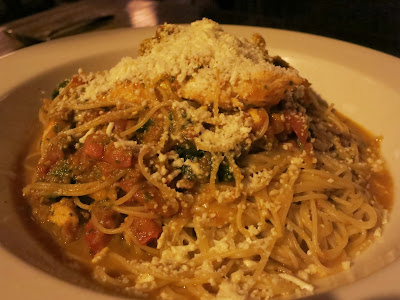