I was recently tipped off by Mike Sula at the Reader (a common happening) about a new place that opened up on Damen just south of Irving Park called Johnny Casserole. As the name suggests they specialize in casseroles here. Intrigued by Mike's article I checked it out a week or so later on a day I felt like something hearty but didn't feel like making anything. So I called up Johnny. 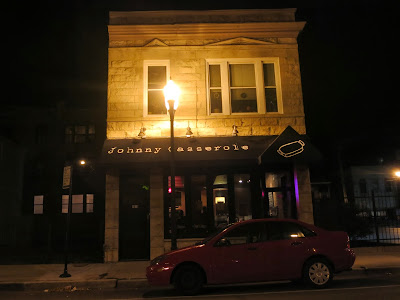 Johnny got his start by delivering ready to cook casseroles to peoples doorsteps. As the word spread about his pans of flavor the opportunity to open a restaurant/cafe came and here we are now. It works like this. They make a certain amount of individual servings each day that need to be ordered ahead of time, you could also wait but just remember your choice of casserole will need to heat thru. Because these are served fresh and never frozen they can and do run out of options of the day. A way to guarantee yourself a taste of one is by ordering an entire casserole which will set you back around $40 but can feed 4-6 people. Not a bad idea for a small eat/drink gathering. I've had the chance to try four different offerings of the 10+ they have and liked each one for what it was. 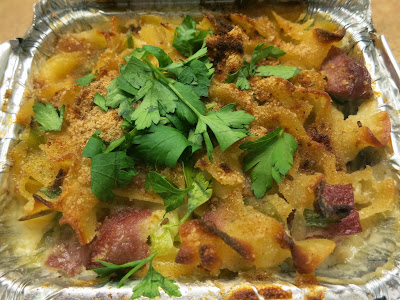 Starting off with the Grabowski pictured above this might of been my least favorite one though I still liked it in a small portion size, I split all these on two different trips to be able to taste a few. My thoughts on the Grabowski were it was a little too rich for my palate. It seems to have a few things I'd really need to have a taste for if I were to order it again. I'm not big on kielbasa, I like it but I don't ever have a need for some. Still, it's an interesting casserole that I'm sure some Midwesterners out there will love. 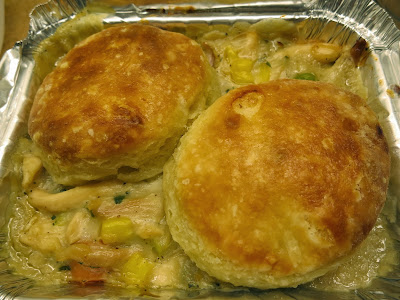 Why is it damn near impossible to find a real deal chicken pot pie around town? I'm talking the American classic old school variety made with veggies and deep in cream. I was excited to see they had a pot pie on offering but wasn't in as big of a rush to try it when I saw they replace the crust with biscuits. Well as it turns out, while not traditional it is very comforting which is what a pot pie is supposed to be all about. I rencently made one that was fantastic but its so much damn work that the next time the urge hits I think I'll stick with this. 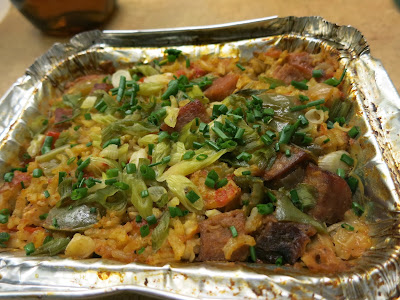 The jambalaya and tuna noodle casserole are the winners for me so far. With the jambalaya it just seems to hit the spot. We don't have many good Cajun offerings around town and this might not even be "authentic" to some but it tastes like it to me. I just wish the portion sizes were a little bit bigger because if hungry I could easily take down two, but at $8 it's not a cheap weekday eat to grab two. With the tuna noodle the keys for me are the balance of tuna in it along with the use of artichokes and also fried onion strings on top. I thought about trying to recreate it but I don't really have to as I now have an option for something I'm not sure any other place around town is making. Probably because it's a dish that can be made by most anyone but like its name says, this aint your mothers tuna noodle. Same goes for all the other offerings including some good looking breakfast casseroles and a shepherds pie I plan to try when the taste for some comes. 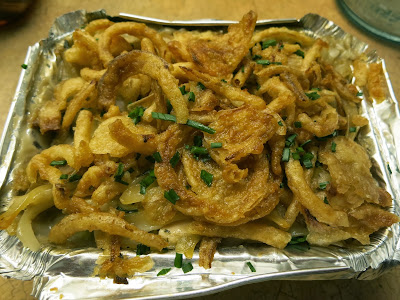