I think I just might of stumbled upon the best sandwich for under $5 in all of Chicago. I was north and needed to pick up some things to make a gumbo with the leftover turkey I had from Thanksgiving. Instead of chasing around a few different spots for what I needed, specifically the okra, I rode up Devon to the City Fresh Market where I knew they always had it. 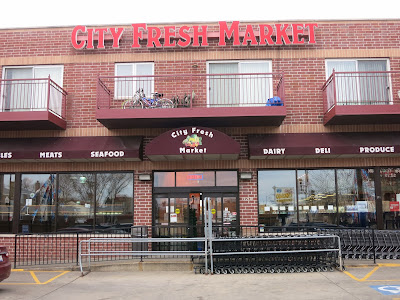 Located at the corner of Devon and Kedzie, depending on which way you're going you could consider this the beginning or end of one of the more international stretches in all of the city. Starting East you'll find a few blocks dominated by Latin American grocers and as soon as that ends it turns into the cities main stretch for all your Middle Eastern grocery needs. As that goes on for a couple miles it eventually turns hardcore Jewish with many Hasidic bakeries and shops and then Eastern European as you hit City Fresh. 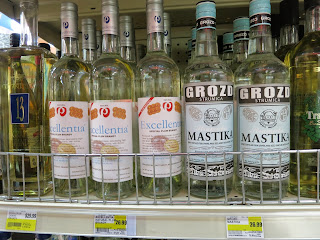 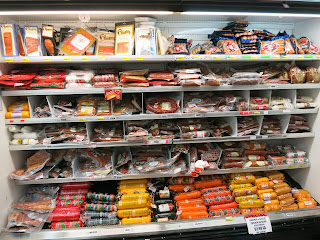 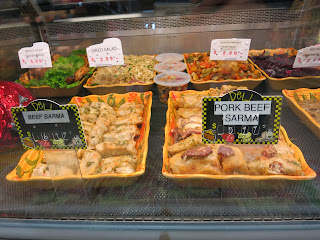 I've always liked City Fresh when I was around and needed something as they have a nice selection catering to all of the different neighborhood residents with a specialty in Eastern European goods. They offer many different bottles of booze from the old country that I've never heard of. The sausage and smoked meat has it's own corner in back. The deli provides popular made in house Eastern European snacks like Sarma. It consists of "grape, cabbage or chard leaves rolled around a filling usually based on minced meat, or a sweet dish of filo dough wrapped around a filling often of various kinds of chopped nuts. It is found in the cuisines of the former Ottoman Empire from the Middle East to the Balkans and Central Europe" from Wikipedia. I've always wanted to try their made in house ljuta rostiljska kobasica (Polish Spicy Sausage) sold in packages with the meats as well as their cevapi which they make in both beef/lamb and beef/pork form. They even sell baked in house lepinja bread so you can build your own sandwiches at home. Then I noticed they had a grill where they'll make it there for you and Pakistani for lunch was put on hold. 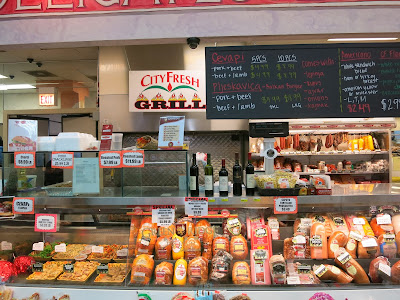 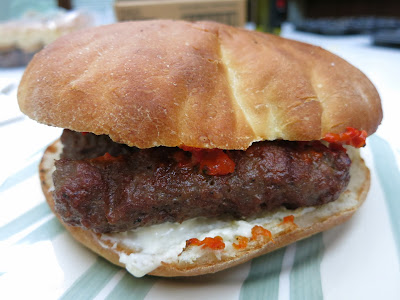 If you click the pic of the deli counter you'll notice on the sign that they offer Cevapi sandwiches with your choice of beef/lamb or beef/pork, five total, for $4.99. If you've ever seen the bread you know it's about the size of Barry Bonds on the Giants head so I said hell yeah, that's a steal and ordered one up. What exactly is Cevapi? The word comes from the Persian word Kebab. Its a grilled skinless sausage or kebab popular in Serbia, Bosnia and Croatia amongst other places. Traditionally they're served with the aforementioned lepinja bread as well as diced onion and both Kajmak and Ajvar. The first being a really rich and creamy dairy product made from cows milk that goes on the bottom bun, followed with onion so they stick and the latter being a red pepper paste that gets spread across the top. All of this is made in house and for $5 I cant tell you of a better sandwich as far as both taste and portion goes. Just know if Jared had been eating these all the time instead of Subway, he'd of blown up past 450 pounds by now. 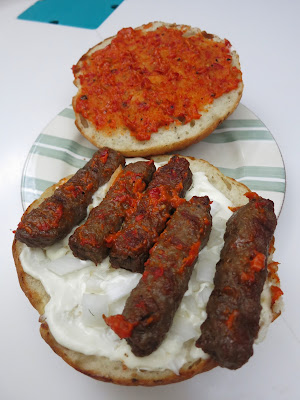 A steal of a sandwich

Get professional trading signals delivered to your mobile phone daily.

Start following our signals NOW & gain up to 270% per day.