The start of baseball season signifies so much including summer being near, the smell of fresh air and of course here in Chicago we eat hot dog's from everywhere outside in that fresh air. Last weekend were by a popular hot dog stand near Wrigley for the Cubs home opener, this week we head south for the White Sox. Located not far from the stadium on 35th street in Bridgeport is Johnny O's, a classic southside Chicago hot dog stand. Actually the stretch of 35th street from US Cellular Field all the way down to Morgan street has three top notch Chicago hot dog stands with 35th Street Red Hots and Morrie O'Malley's also along that way. But today we head to Johnny O's which is a hot dog stand that occupies the back end of a liquor store. Unless it's bone chillingly cold outside customers walk up to the window outside and place their orders with the people inside behind the sliding window. 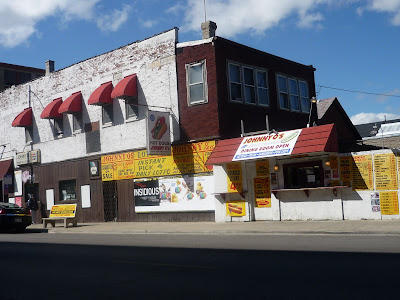 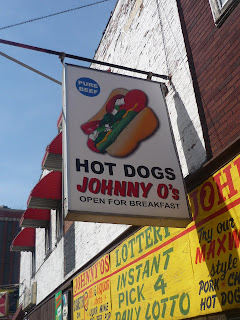 Despite it's small size the menu is large at Johnny O's. In true southside style the prices are dirt cheap too and you can always count on a few city trucks parked near there as the city workers munch on lunch. The liquor store/bar's actual entrance is on Morgan street but you order food on 35th street outside in the back off the menu that extends along the block. It's a popular stop for people from the area on gameday. White Sox fans will roll up to the window and order some hot dogs and such to eat as they walk to the stadium a few blocks down. 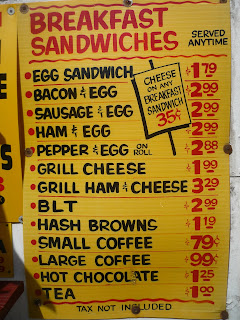 Johnny O's is an all day operation 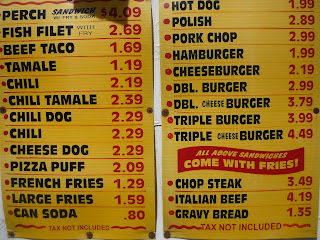 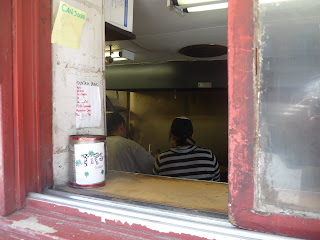 I've made a few trips over to Johnny's for some grease grub and always enjoy my visit for what it is. Its an experience and brings you back to another time when this area was full with factories and warehouses which for the most part have closed down. The area has gotten better and a few of those old factories were turned into condos as the area around the ballpark continues to grow. Nonetheless Johnny O's has remained and their customer base remains loyal. My personal favorite on the menu here are the breakfast sandwiches which again are good for what they are. You or me could easily make the same bacon, egg and cheese on toast that Johnny O's does but sometimes it's just easier to let someone else do it and Johnny's doesn't overcharge so always feel full after and you didn't have to spend more than $4 doing so. The hot dogs at Johnny O's are good but nothing too special so I tend to order other stuff off their menu. It's not that they're bad, they're actually pretty damn good but that doesn't do it when you live in Chicago. Everything on their dogs includes mustard, onions, pickles and tomato. 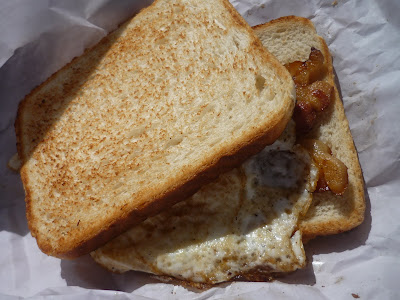 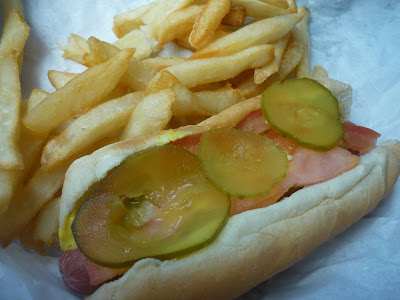 Once or maybe twice a year I like to head over to Johnny O's for a famous southside food item that was introduced to the rest of the world by Peter Engler. The Mother in Law is found at quite a few southside hot dog stands and consists of a tamale with chili. Peter and Anthony Bourdain ate one of these on the Chicago episode of 'No Reservations' which gave the relatively unknown outside the southside sandwich some national publicity. Some stands choose to serve the cornmeal tamales with the chili on a bun while others serve it in a cup. Chicago hot stand style tamales are different than traditional Mexican tamals and are more like Delta Style tamales which they have a connection to from when blacks were leaving the south and coming to Chicago and bringing Blues music and tamales with them. They can now be found at most every Chicago fast food stand and are popular enough that there are a few different companies that have factories where they make them. Johnny O's serves their Mother in Law in a cup and that's actually how I prefer them since they can be real messy if your eating one on a bun. 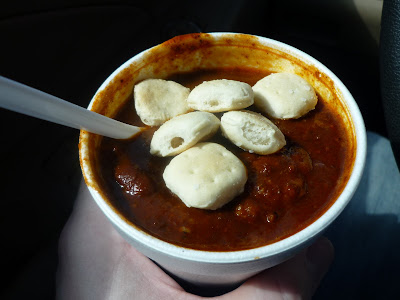 Chili with a tamale from Johnny O's

Since I am born and raised city boy I have a love for Chicago style tamales. They're cheap and I always got one with my hot dog or would get a few to dine on for a snack and not spend more than $3 on them back in the day. Nowadays they're up to about $1.50 each but still worth it when hungry and as always best enjoyed when inebriated. When you throw one of these tamales in with some chili it's not a bad combo whatsoever and in fact turns average chili into pretty dang good stuff just like that. They also throw sport peppers into the cup and serve it with a few packs of oyster crackers on the side. Once you mush everything up it's actually quite good. The chili is homemade and it's a heavy tomato based brew so the spicy corn roll tamale really helps give it some flavor depth. Just like the White Sox, these might not be for everyone in Chicago but I do enjoy them a few times a year which is more than I can say about the Sox. If your wondering where the term MIL came from? Peter explained it on LTH as he was told. The owner of Johnny O's told him. “Sure,” they call it that “...because both kinds of Mothers in Law are known for giving you heartburn.” Haha pretty damn funny. Another known cause of heartburn on the southside is Oney Guillen and his Twitter account. Surely some drama this summer awaits. Due stay tuned. 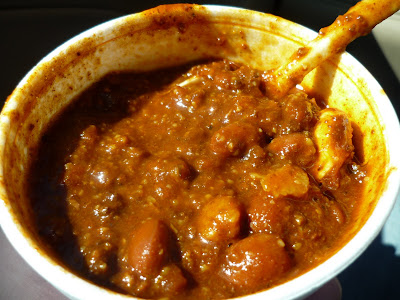 The Mother in Law all mushed up