Hey, hey what da ya say, it's opening day on the Northside here in Chi. The Cubbies have a new look for 2011 but the local's favorite hot dog stand visited by many Cubs fans were headed too today has always remained the same. Byron's Hot Dog Haus has long been a favorite for a pre or post Cubs game meal and is a quintessential Chicagoland hot stand. Just like the rest of the best, it's all about the dogs at this tiny hot dog stand located just below the Sheridan El train stop on Irving Park road in Lakeview. Byron's is tiny and has no seating inside nor bathrooms but they do have a tent that sits about 30 people located outside next door seen in the pic below. The hope might only be around during May for Cubs fans but they can always rely on Byron's being there for them when they need something good in their summertime life, and this is from a lifelong Cub's fan... 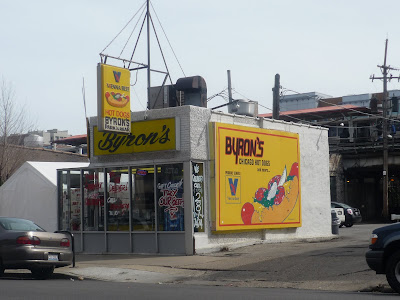 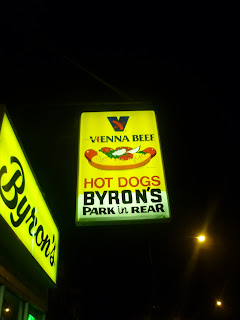 Byron's is always better at night... 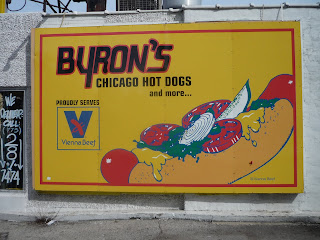 They have always proudly packed aka loaded their hot dogs 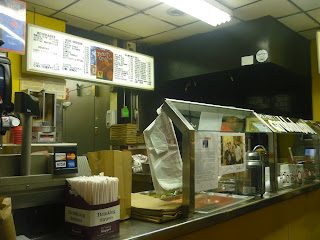 The view as you enter

Byron's has been around since 1975 and started out in the little shack on Irving Park seen above. Eventually they became well known for their fully loaded Chicago style hot dogs and before you knew it they had multiple locations and were cementing themselves into Chicago hot dog culture lure. When I was a kid I remember we would go to the Byron's that was located at North and Clybourn. They had a huge structure that was this ball with neon spikes coming out of it. I loved that and the loaded hot dogs and lived for the fresh from the fountain Green River. Like alot of other old school long gone places in the city this location was demolished, for a Crate & Barrel !?!?WTF?!?! As the years passed locations opened up and some closed like the spot that used to share a building with the old Yum Yum Donuts on Clark street right next door to Wrigley Field. They are now so well known that they were chosen to make their famous hot dogs at the White House congressional picnic last June. They are also a member of the Vienna Beef Hall of Fame. 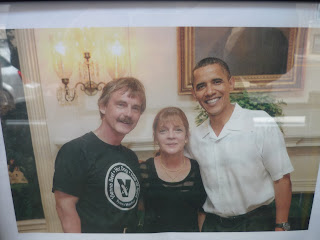 Byron's has a pretty extensive menu including all the Chicago hot dog stand regulars. Along with the dogs and sausage they got burgers, gyros, beefs and a whole bunch of other stoner's delights. I've been going to different locations for ages and I'll tell you right now it's all about the hot dogs. It's impossible for someone like me who's been to all of them to name the best but Byron's does have a cult following and that's usually how you figure out which dogs are most beloved by city folk like myself. Once you walk into the tiny inside area you go straight ahead and place your order with the dude manning the grill. The employees here are pros at what they do and will take care you quickly and swiftly. They get alot done in the 12x4 foot workplace they work in. 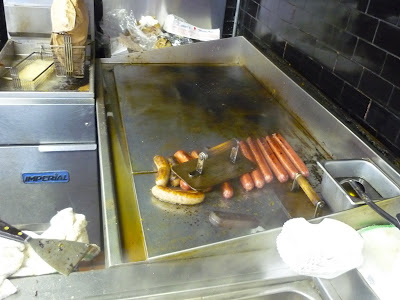 After you've placed your order with the grill man you continue down the aisle a few feet and graze over the condiment stand. This is what elevated Byron's past many of the other 100's of hot dog stands around town. Byron's brought new meaning to the term "drag it thru the garden" as they literally put a small salad on top. Your topping options are mustard, onions, relish, lettuce, tomato, green peppers, pickles, cucumbers, sport peppers and celery salt. Hell I may be forgetting a few but that gives you an idea of just how stacked these dogs there get. 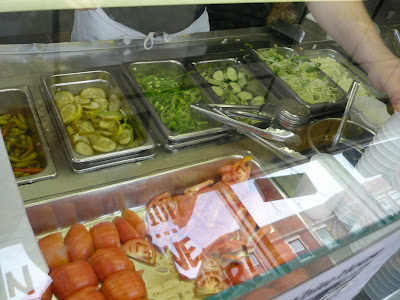 The overtop view for you of the condiment bar

As I was saying about the hot dogs, these are the way to go at Byron's. The only other option I would recommend is their Polish sausage. The other options arent bad but can be hit and miss unless your inebriated in which case it all tastes great. Nonetheless they still give you options when it comes to ordering yourself a hot dog. They come in three sizes and once made they are dressed up your way. Lets take a look at all three. 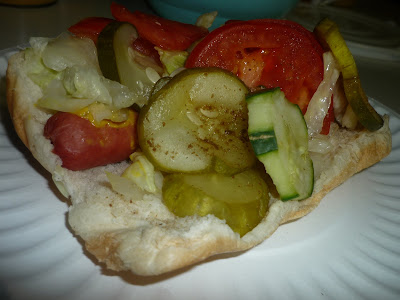 The small hot dog is my least favorite of the three, but it is what I eat when I want to feel healthy. The reason being is because it's more like a salad with a hot dog on top. They use Vienna Beef hot dogs at byron's and for the small dogs they take them out of the steamer so some people like the small ones due to the fact they are steamed. I like the steamed dog dragged thru da garden but just wish theirs was bigger. 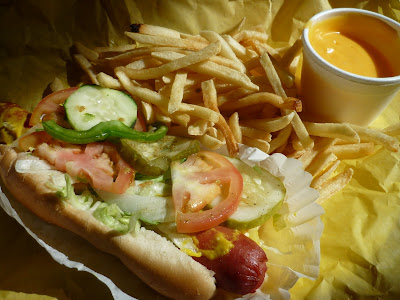 I would say the jumbo size dog is the way to go at Byron's. This was my standard order as a youth, along with my much missed (It's still avail. but not the same as when I was a kid) Green River Pop. The jumbo dogs are grilled and have a nice crisp exterior that works well with all the veggies. I'm not a big fan of relish so I don't include that on my dog but I do get everything else and have them load it on. As is noted I'm more of a minimalist depression Chicago style hot dog guy but I like me a garden dog from time to time too. The fries at Byron's are alright, similar to McDonald's they are better than most places frozen fries which is what they are. They used to really hook you up when you ordered them (fries don't come with the dogs) but have held back the last few years. I like these fries when I'm really hungry (out of a sober mind) and will order them with the gooey neon orange cheese on the side. For some reason I love that stuff with their fries. 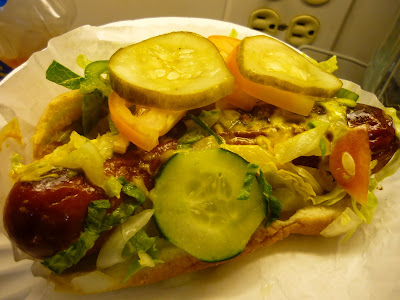 Then there is the Dogzilla. This half pound monster is specially made for Byron's by Vienna Beef and is a favorite of the nighttime crowd and all blue collar city employees. I have had a few Dogzilla's in my day and you really do need a knife and fork to eat this thing. Unless your a porn star it's not easy to eat. It's hard to swallow a small piece of this sausage that is cut up let alone the whole thing with the toppings on top. But that's half the fun and I imagine part of its attraction to the drunken customers. I look forward to a Byron's Hot Dog and Cubs game this summer. I wont get too much into the 2011 season here on the site but I have lifted my self imposed Wrigley Field ban. So I will attend a few games this year as I like the new start we Cubs fans are getting. But if you wanna get deep into some baseball talk come find me at one of da bars around town and we'll have a few and talk some Mike Quade and what else the future holds for those of us up north who've been patiently waiting since 1909. 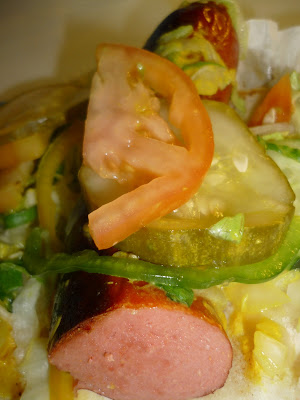 I get the polish every time I go there it's like a foot long or close to it.