I was out in the not so interesting parts of Chicagoland last week and found myself in Schaumburg. After discovering a place long on my list to visit was now closed down I was left with limited options as far as food. I'm sure there's some good spots around there but the problem is everything is in a strip mall so if it good theres no way you can tell. I wasn't starving and needed something small and quick and then I drove by Zippy's. The "Home of the Cheezy Beef" slogan is what got me into this Pizza/Beef place. Zippy's is like so many other better than average fast food places around Chicagoland as far as both looks and menu. You find places like Zippy's in each and every suburb. The long running family ran joints that have been a part of a few generations from the suburbs they serve. 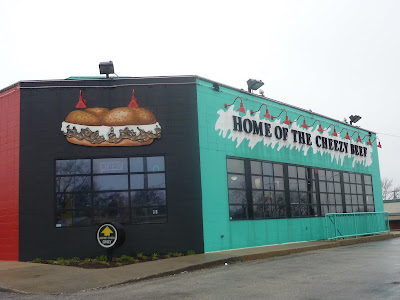 I walked in and it reminded me of the old Byron's Hot Dogs on Clybourn. There were quite a few booths and you walked up to the ordering area to look at the menu. They offered their cheesy beef in both mini and regular sizes and since I wasn't too hungry I went with a mini which was six inches long. I ordered it with hot peppers and it was ready in no time. I opened up and saw that they melt the cheese, which is mozzarella, on top of the sandwich. This can sometimes make the cheese itself a little rubbery from the cooking time and I prefer the cheese melted on the bread. I'm not big on cheesy beefs but this was better than I expected, on all levels too. I was very happy with the gravy which had a rich flavor and deep color as well as the beef which I wasn't expecting much from. It was sliced right and tender enough to make me eat the whole thing in less than three minutes along with the soft Turano bread roll they used, not the best bread but it worked with the cheese and beef and held up well with the gravy. In the end, alot better than I thought. I wont score this beef since it had cheese on it and all beefs scored have been strictly beef's with hot. 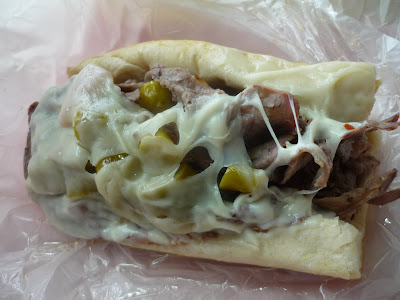 Oh no. You went to the Zippys in Schaumburg. I'm gagging just thinking about it. LOL!