This next topic is going to be a painful one to some and an enlightenment to others. Anybody that has ever spent time in Madison, WI should have an idea of what PelMeni is (click link for info). There are mentions throughout the 'net about an old dumpling shack located on State St. in Madison, Wisconsin that goes/went by the name Pelmeni. Its a shame because my buddy who owned half was forced out and they were bought out and switched to pre-made dumplings and eventually from what I hear it is now closed due to its fall in quality.

Thats right, Pelmeni-Madison is closed. Gone is the small storefront where they offered pelmeni in two ways, meat and potato, done two ways, traditional (lots of butter and sour cream) and their version which is vinegar, curry powder, hot sauce and cilantro. I always ordered a large($7) half and half done their way. Pelmeni was one of Madison's gem's, one of those places that you just couldn't find anywhere else. It was perfect for the frigid winter months. Pelmeni is a Siberian winter time snack, perfect in the fall and winter. It is a great late night eat to soak up all that booze which is why the marriage between it and Madison seemed so special.

Well its pretty often that I have fiendish cravings for Pel-Meni's original Pel-Meni and when I get around to finding frozen beef pel-meni, I usually buy some, but I rarely see it outside the Eastern European markets in Skokie, IL. I recently found some at the Treasure Island in Lincoln Park. It was a familiar brand called "Smilgas" European dumpling's. So I picked up a package of the beef and got to work on this oh so easy exotic tasting creation. In honor of Halloween this past weekend and the best place to celebrate it...Madison, WI.

1-16 oz. package of frozen beef filled Russian Dumplings (you could also use potato, great for Vegans or or use a combo of both)
1-2 TBLS of Vinegar
Hot sauce such as Smokin' Joe's or any Louisiana brand (add as much as you want)
1-3 TSP of curry powder
Chunk of cilantro chopped down finely
big scoop of sour cream and some butter

Note: the spice/cilantro and vinegar is the amount for each bowl. A 16 0z single package will serve two, so add the amount above to each individual serving in the bowl when making them.

The only thing I do different than Pel Meni did was I fry them in butter after boiling them. Take a non stick pan and melt some butter on low heat when dumplings are almost done boiling.

Just follow the packages cooking instructions and when they are cooked thru take them out with a pasta strainer and throw a slice of butter on them. Throw the dumplings in the frying pan and cook until blistered, making sure they dont stick by moving them around often.

Note: I like to boil them even a little longer than they suggest so they are really hot when they come out of the water and go into the pan. 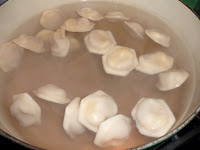 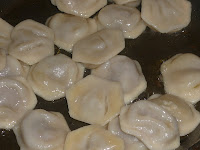 getting crispy in the butter

When done place them in a bowl and pour the vinegar over them and toss it so they get coated. Sprinkle the top with the curry powder then pour hot sauce all over the top and side and sprinkle with cilantro. Use sour cream to dip them in. One of my favorite recipes, when you want these you just have to have them. If you've been to PelMeni in Madison, tell me these aren't as good or better, they are fried in butter! Thanks Paul. To all my peops from Madison living out east, you should be able to find frozen pelmeni in NYC and other heavily populated eastern Euro areas. 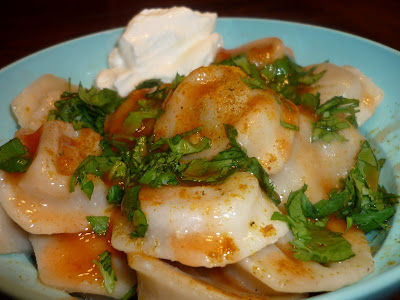 I think that the Alaskan location is still open in Alaska. No website but I was told "The Juneau Pelmeni shop is the original. They have two others, one in Madison, WI and one in Bellingham, WA." So there you go. Madison location is closed. But now you can have them everywhere. I hope that Paul and his buddies can get back on their feet and if by any miracle they come across this...Lets chat.

dude that looks so good. if it wasnt 89 degrees here i'd be making some myself right now.

Make me these next time I'm in town!

Oh WOW that really takes me back... I must have eaten at Pelmeni once a week back in its heyday... thanks so much for the recipe, I've already tried it and it's excellent!