-Grubbing in Chicago(land)
Where the locals eat (Burnham, IL)

Last month I took you way up north to Zion and Captain Porky's for some fried seafood. This week I take you way out south to Harbour Point for the same thing amazing seafood right off the lake. Harbour Point fits the mold of an Chicago shrimp house. Its a shack looking fried seafood joint with a few neon signs offering sides like coleslaw and potato salad, cans of pop, no seats to dine in and a few arcade games to play while you wait for your order. But what sets it apart from the rest are two of their signature dish's--the fried monk fish & seafood gumbo--and they are both incredible eats in the city of good eats. Lucky for you, you got me to get you, in the know. Its time to spread the good word. So please do so. 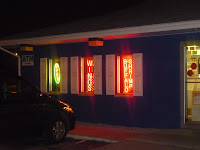 At what other shrimp shack can you get fresh fried monk fish? You know I already know the answer and that that was a sarcastic question because the answer is nowhere. This is the dish that they proudly proclaim as theirs with joy on the wall's, so when I randomly drove by and stopped in one day, I knew this is what I was getting. The sign that read "The only fish that taste like lobster" and "served with drawn butter" all but sealed the deal. What doesn't sound good about fried fish with a lobster taste/texture served with that butter they always comes with your lobster dinner in New England? 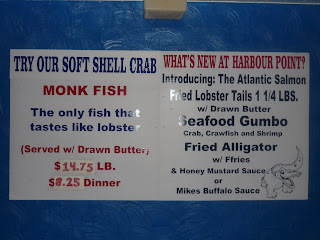 On the same sign that advertises the fried monkfish (above) you'll see that they also serve a seafood gumbo. Ill try gumbo anytime I see it at a place such as this so I added an order of their seafood gumbo to my monkfish dinner. Oh yes, that night was a good night. It was an absolutely crack-like meal and in case you wanna know what "crack-like" means, it means I now have fiendish cravings for some fried monkfish and gumbo. The fish is very, very similar in texture to lobster and when I drowned it in the drawn butter it was euphoric in flavor and texture just like lobster. The seafood gumbo was loaded with seafood like shrimp and crayfish and might of been the best I have found in Chicago. The gumbo had a dark roux and had all sorts of flavor that only a gumbo that was tended too for hours could have, my only regret was not getting one of the huge $11 buckets. If I had just ate the gumbo in the parking lot with my fish then I would have gone right back in for another. The good news? there will be a next time. 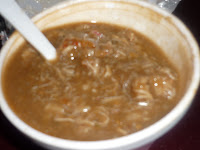 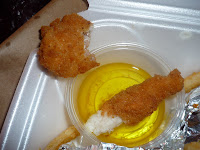 piece of monkfish over a cup of drawn butter 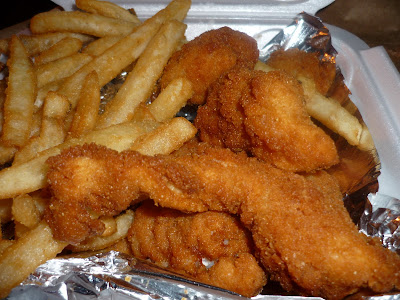 In a city like Chicago that has such few competitors for being so rich in food, it can be hard to find seafood joints as good as some of the towns along the ocean, understandably so. Unfortunately the once abundant fried shrimp shacks have become less and less. Good thing there are still a few around that aren't going anywhere. I cant wait to get back and try the wings and buffalo shrimp, both looked very good on my visit.

They have Fried Alligator? Try that shit fo me -- with mikes buffalo sauce

I just tried some monkfish not too long ago and thought the same thing -- tastes like lobster!
But you gotta google them if you've never seen the whole thing - it is an amazingly ugly fish.