You might have seen a recent feature in the Trib about gyros in Chicago. You also may remember when I said back in March that 2018's biggest food trend was going to be Greek street food. Well it seems as though I was right. It's really taken off. Thing is it's more so become big in the suburbs. That's where Apolis Greek Street Food is located. Lisle to be exact. I learned of them when the Hungry Hound featured them back in late 2017. I wanted to try them and did so when out there. 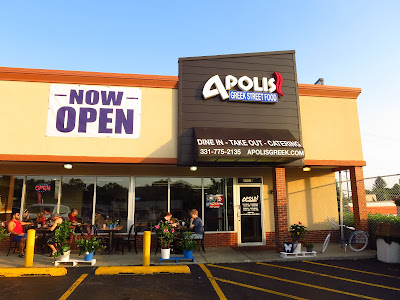 What caught my eye about Apolis was their pork gyros. Made in-house. A rarity in a city where damn near everyone uses factory made cones of gyro meat. Those cones though are a mix of beef and lamb which isn't the preferred choice in Greece. There they like their gyros made with pork. Or sometimes maybe chicken. Apolis offers pork, beef/lamb, and chicken gyros. All sliced fresh from the cone. I got a meal with two sides and chose Greek potatoes and gigante's (Greek Lima beans). I liked what I got but was left wishing for a bit more meat. What you see below is mostly rice. There was about as much meat as you'd get on a sandwich which was disappointing bc it was pretty good. 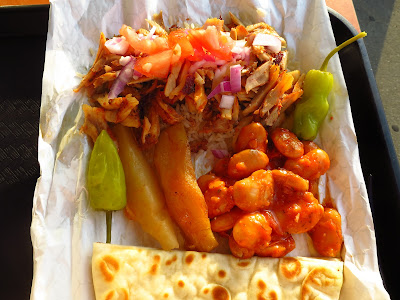 Excellent Blog! Thanks fro sharing. If you are looking for traditional Greek street foodproviders in Sydney then just approach Skyros Greek Meze Restaurant. For more information check out their website also.