It's been a minute since we explored Bridgeview. The Chicago suburb and the surrounding towns in the area are thee place to go for those who want Middle Eastern cuisine. It's no Dearborn (Michigan)  but there's some good stuff going on here. Some of which is new. Kabul Kabob opened a couple months ago. Located in the large strip mall at the 7200 block of 87th street across from Al Bawadi. 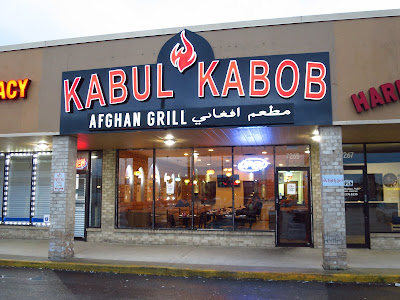 Kabul Kabob is a joint venture by a guy who grew up in Northwest Indiana and his chef who's originally from Afghanistan. The menu features plenty of Afghani style grilled kabobs as well as popular snacks such as Mantu which are Afghani dumplings. However they're currently in a long form of a soft opening and the Mantu and Beef Tikka Kabobs aren't available until the grand opening. I was rec'd a sampler platter and didn't need much convincing after seeing a few bags of charcoal siting at the countertop. The Kabul sampler came with beef koobideh, lamb tikka, chicken tikka. Served on the side was an Afghan rice dish called Qabuli which is a type of pilaf made with raisins and carrots. Some grilled onion and tomato also accompanied the meats and rice. This was a delicious plate of food that came with very friendly and also attentive service. I spied the lamb chops and they looked fantastic. I will be back for more grilled meats next time I'm anywhere near the Bridgeview area. 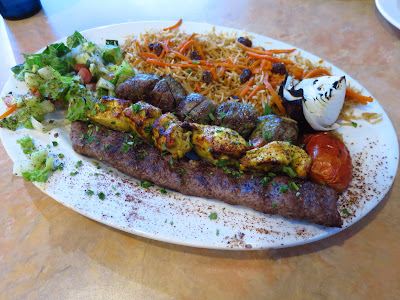