Logan Square is showing no signs of slowing down. Apartments complexes keep going up and new restaurants keep popping up. One of the neighborhoods newest food options is Mini Mott. Brought to us by the folks at Mott Street over on Ashland. Mini Mott is their casual burger, fries, ice cream spot. 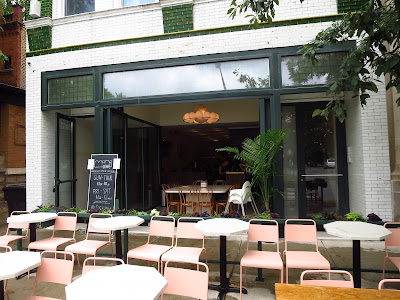 Over at Mott Street they have a burger that received big national acclaim when it was named one of the best in Chicago by Thillist. It then made other national lists creating a big buzz. Problem was this burger is only available at the bar after a certain time and there were only so many etc. Seemed like to much to hurdle so I never did give it a try. Enter Mini Mott. Here they serve the same burger that basically made them locally famous. Along with that burger they also have wings, fries, and ice cream. The menu is pretty simple with those basically being your selections. I stopped in with my mom and niece one day recently and we got to try it all. The famous burger, garlic fries, and wings. 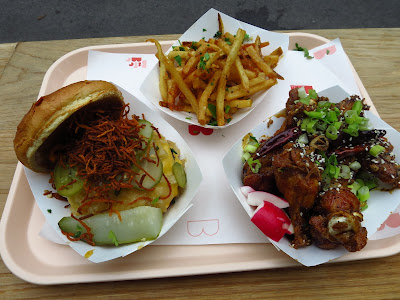 So lets start with the burger. It's made with two fresh patties of beef, American cheese, hoisin aioli, crunchy sweet potato sticks, pickled jalapenos, pickles, miso butter, and onions. I liked it. More than I thought I would actually. I'm a simple man when it comes to my cheeseburgers. I dont like a ton of stuff on them other than the usual suspects such as mustard, pickles, onion. But this was a well put together burger where everything just worked in one. It still had that classic cheeseburger taste. 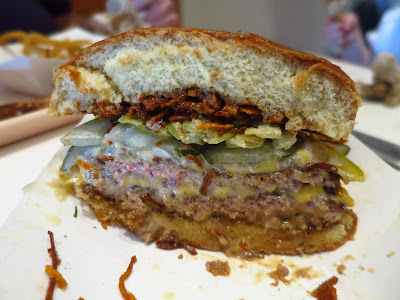 As far as the rest of the stuff the wings come in two different sauces. We got an order of the everything (soy, jaggery and dried chilis, tossed with sesame, poppy seed, fried shallots) and they were really good. I loved the fact they give you tzatziki sauce to dip them in. So did my 1.5 year old niece who was using a spoon with the plastic wrapping still on to eat it straight up. Only thing is the second time around with my wife the wings weren't nearly as good. The fries are fresh and thin cut. They go well with the burger and also that tzatziki sauce. Last item was something I'd been seeing on instagram often. You can get their soft serve in a Japanese Taiyaki cone which is a warm waffle like fish shaped cone split down the middle and in this case filled with ice cream. Red bean paste is popular in Japan. Overall I liked the vibe here and think Mini Mott is a welcome addition to the hood. 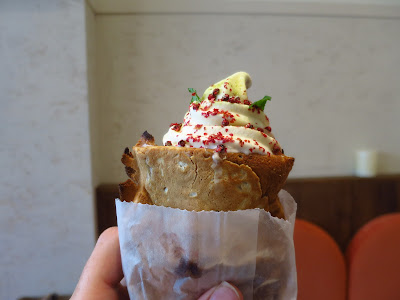