For the last year or so I waited patiently as a sign at 1814 N. Western announced that Italian Ice was coming soon. For me Italian ice is the ultimate summer treat. I've preferred it to ice cream since my youth when I was a regular at Tom & Wendee's (RIP) for a good decade plus. Much like Italian Beef, Italian Ice is a food that takes skill. Many places will take shortcuts in getting to the final product. There's only so many spots out there putting out real deal Italian Ice. Add the folks at Ava's to the list. Since they opened this past Spring I've been a regular at Ava's. Run by a husband and wife team the shop is named after their young daughter. The Hungry Hound recently ran a segment over on ABC. 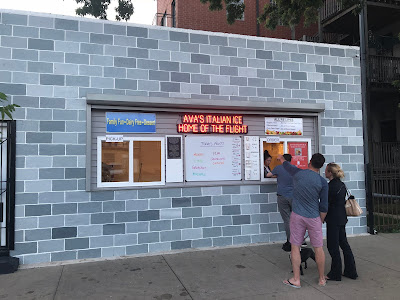 The shop itself is a walk up and order from the window operation. She takes the orders and he scoops the ice. So far I've been able to try over ten flavors which vary by the day. Everything is made from fresh natural fruits and the ice has the consistency of gelato in many of the flavors. A few of my favorites thus far have been Apricot, Peach, and Plum. Which gives you an idea on the type of flavors they're putting out. No samples so you'll just have to work your way through them but don't worry there hasn't been a bad one yet. Ava's also has one of the best rewards programs I've participated in. Better than Speedway and Hotels.com. You get a free flight after every 5th purchase. The flights are massive containers containing four flavors of your choice. I've already cashed in on two free flights and honestly it would've been three if not for the varied hours. Ava's is a two person team so there's been days where they sold out and had to restock thus were closed the next day too. Check their social media for instant updates. All in all Ava's is a great place to Summertime Chi. Go try them out. 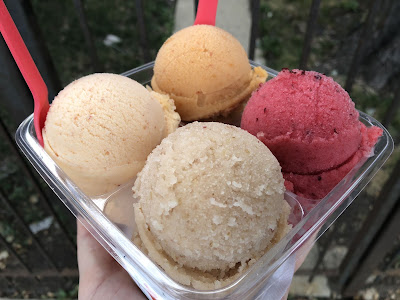