Today's report is quite a few years in the making. It's spans over at least three different trips to the NE Ohio area during the last five or so years. During these trips there's been something that's always stood out as far as Eastern European food goes. Cuisines from countries like Poland, Hungary, and Serbia can be found in NE Ohio towns like Toledo, Parma, and Cleveland. It's quite interesting if you ask me. These restaurants and bakeries are holdovers from when Northeast Ohio was a hotbed for immigrants looking for work. Most of them found it in the areas steel mills, canals, and other forms of blue collar jobs. As always with immigrants come their recipes. Many of which live on today. 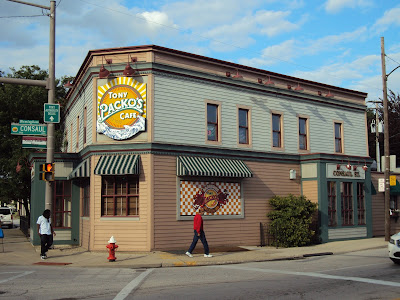 Here we have the most famous restaurant in Toledo. Tony Packo's and their Hungarian sausages are synonymous with the city. What started out as a small hot dog shop during the Great Depression in 1932 has spawned into a mini empire with multiple locations including a spot at the city's popular minor league baseball stadium. You can even buy Tony Packo's signature sausages at grocery stores in this region. The famous "Hungarian Hot Dog" as they're called are a Tony Packo original recipe. There's no Hungarian Hot Dog Tour to embark on in this region. The inside of the original is part tavern and part sit-down. As you might imagine they're a popular place for the family on Sunday's. 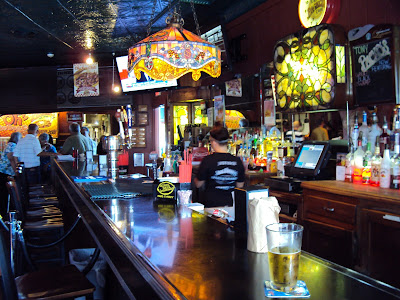 a peek inside at the bar

This being my first visit I was required to try the signature Packo Dog and I found it to be quite tasty. The spicy sliced sausage is stellar and so is the spicy meat sauce on top. The latter of which I thought was good enough to warrant buying a DIY jar of it to take home. When I opened it one winter I followed the directions precisely and added two pounds of beef and some tomatoes and ended up with a huge bowl of sweet slop. I guess they're not giving that secret recipe out to everyone after all. 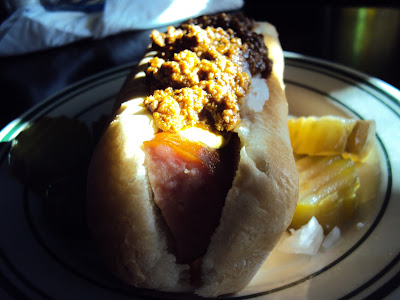 The menu boasts other Hungarian favorites and I decided to take an order stuffed cabbage to go. Beef and pork combined with rice and seasonings, hand-rolled in cabbage, thats simmered in sour cream and tomato sauce. Served with their tender paprika dumplings and gravy it made for a pretty good meal spread out over two days. After just one visit it was easy to see why this place is loved locally. 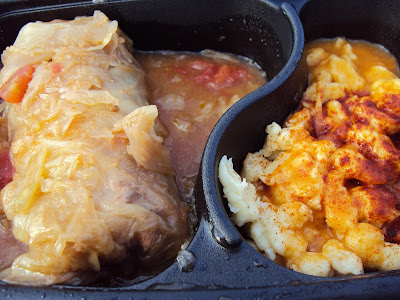 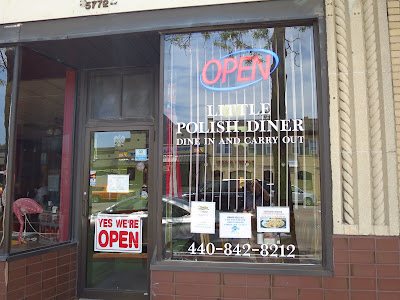 Our next stop takes us the Cleveland suburb of Parma. It's the city's largest suburb and a great place to go get a taste of Old Ohio. There's both a Ukrainian Village and a Polish Village too. The Little Polish Diner is exactly what it's name implies. It's a spot I got tipped off on by the fine folks at Roadfood. The type of place I love exploring while on the road. They say this is the place to go in Parma for a taste of Poland and after one trip in I can back this fact up. I tried a plate of Pyzy which consisted of six fluffy potato dumplings filled with meat and sauteed in bacon and onion. Yum! Served on the side was a creamy cucumber salad that I didn't think I'd like but I loved. Great little place. 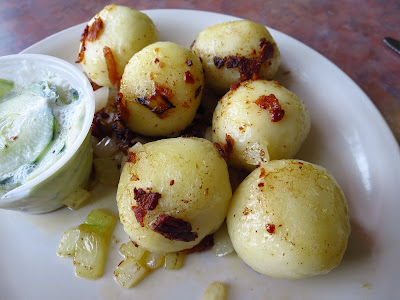 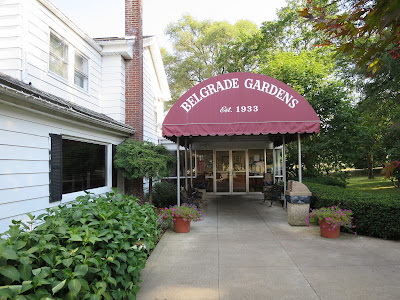 In my opinion one of the country's most interesting regional eats can be found in the town of Barberton which is about 15 minutes southwest of Akron. In this little town of 25,000+ the fried chicken is king. It's called Barberton style fried chicken or Serbian fried chicken and it can be found at a handful of old school spots in town. Belgrade Gardens is where it all began. Started by two Serbian immigrants forced to sell their farm during the Great Depression they then opened Belgrade Gardens and began serving their now famous fried chicken. It's a distinct style that I think is best described as Shake & Bake style as far as the thick unseasoned crust goes. Though this isn't baked but rather fried in lard. The meat is really juicy as they've perfected the fry job over the years. Also distinct is the fact they serve the chicken back (top piece in the pic) in your order. Dinners come with a vinegar-based cole slaw as well as a unique rice and tomato sauce side that's seasoned with hot peppers called "hot sauce" and fresh cut french fries. I really enjoyed both the atmosphere and food. 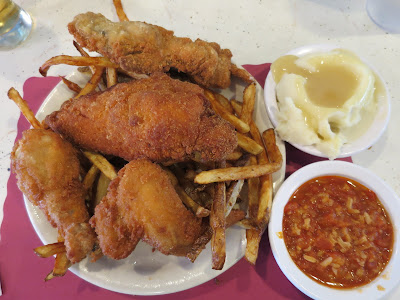 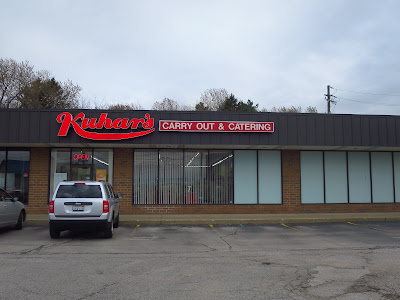 Out in the Cleveland area there's a couple places that remind me of old school spots in Madison, WI that I used to frequent. Places where they run a catering operation that doubles as a takeout joint with the menu switching up daily. Kuhar's is in a suburb called Mentor which is about20 minutes north up the lake. You wouldn't guess it was a restaurant without the carryouts in it's name. This place has been a part of the area for more than 40 years. If you grew up around here you probably went to a party catered by Kuhar's at some point. They have a menu that changes each day and it features popular Hungarian-American dishes like goulash over buttered noodles. it's the prettiest looking dish but comfort food rarely photographs well so whatever. I wish I had a place to carry this out in Chicago. 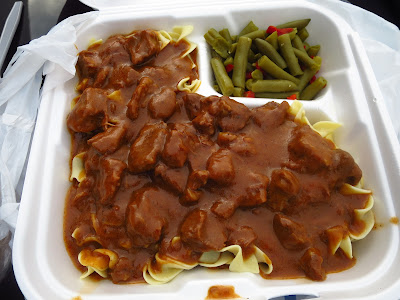 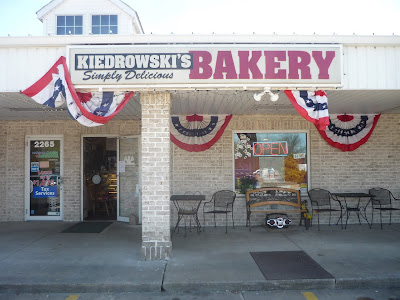 Approaching their 30th year in business this small polish bakery in a strip mall in a Cleveland suburb is a popular spot with the locals. It was named "best Bakery in America" in a poll conducted by Baking Buyer Magazine back in 2011. That might not mean much but I can vouch for the place. They pack alot of house baked goods on site. Most of which looked like something I would like. The most popular of which is the Snoogle. "Accidents can be disastrous in a bakery, but the 'snoogle accident' was a welcome one for Kiedrowski's! Late one evening at the bakery, Tim was preparing ladylocks and Terri was working on a batch of cheese danish. With leftover ingredients, these two happy bakers set out to create something new. A little bit of this, a little of that, and voila, the Snoogle was born! These sweet cream-filled confections have become Kiedrowski's biggest seller. It is not unusual for the bakery to sell 40 dozen Snoogles daily, and upwards of 100 dozen every weekend." 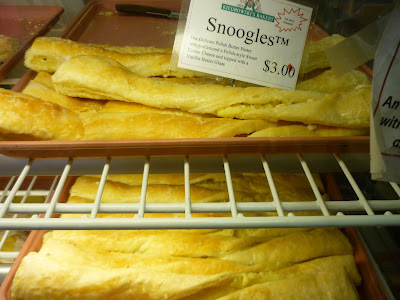 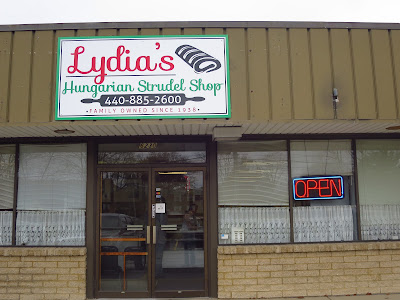 There's a handful of bakeries in the Parma area and a couple of them feature Hungarian strudels. I tried to go to two of them but one was randomly closed. Good thing Lydia's was not other wise I would never know I have a love for Hungarian style strudel. The original location of Lydia's opened in 1938 in an area that had a predominately Hungarian and Romanian population. Today they;re a fifth generation family business that hasn't changed a thing as far as recipes. I got a half dozen of their hand stretched made from scratch strudels. I got different flavors like cherry, apricot, and even prune but it was the cheese which she recommended that blew me away. If I'm ever near here again it's a must I stop and get a bakers dozen. These are the treats I never knew I needed so much. 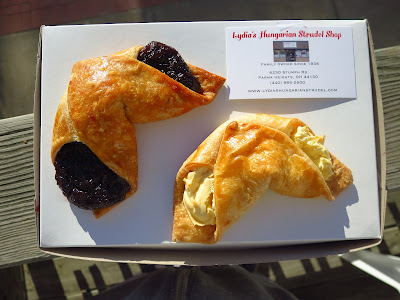 The closest thing to the Barberton hot sauce I've seen are the sweet and sour tomato sauces that you see in Jewish cooking—no doubt a common Eastern European origin, and also I suspect one of the reasons Jews in America took to Chinese food so easily. It was a very pleasant surprise at Belgrade Gardens, though I just can't do full-on lard find chicken very happily any more-- at home I do peanut oil with some bacon lard thrown in for flavor.

Having grown up in Barberton I can honestly say that while Belgrade Gardens chicken is good, even better is the chicken at Whitehouse Chicken (downtown) and Hopocan Gardens (west side of town). Of the three, Hopocan Gardens is by far the best.