I'm always surprised when I find a totally new to me spot that's been around the block forever. While there's still a few I have yet to make it too there are not many I flat up do not know about. Or are there? Seeing as how there's no way to know what you don't know I'd like to think so. I found Garfield Gyros when I just so happened to be driving by. The old school look and bright colors caught my eye. 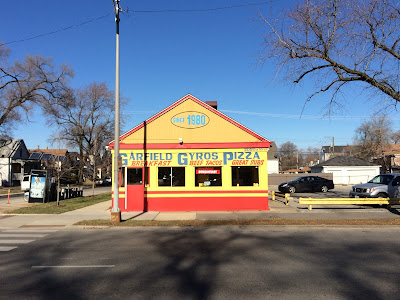 Garfield Gyros sits all by itself in the middle of Garfield Blvd. I don't think there's another business within a few blocks. Both it's looks and location caught my eye some time last year. I decided to stop right there and have now been back a few times since. It's a classic Chicago style fast food shack. The old school type as is evidenced by it's age (Since 1980). Bc they cater to the blue collar crowd they also do breakfast which is something many of the old school Greek owned Chicago style fast food shacks do. Judging by the quality of the stuff coming out from behind the ballistic glass that separates you and the staff this is some of the city's finest food being made behind bulletproof glass. 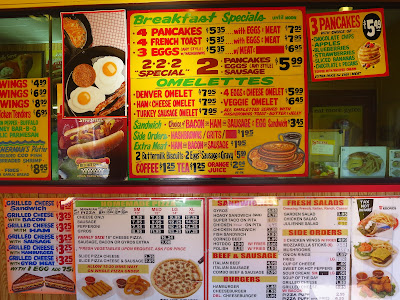 If you look at the bottom left hand corner of the menu up above you'll see what I believe to be the best item to order here. It's the house made grilled cheese. They do them really well. I also like the Greek grilled chicken in a pita. It's typical Chicago style fast food which has always been a tier higher than any of the franchised crap from other parts of the country. Fans of the long gone CND Gyros Lounge will get a fond memory out of the gyros grilled cheese from Garfield. I don't know why the gyro melt isn't as common as the gyro sandwich itself but it seems like only the old school spots rock it. This one might be missing those potent grilled onions many of us remember from CND but at just $3.25 this is one of the more satisfying sandwiches you can find at the under $5 pricetag. I'm a big fan. 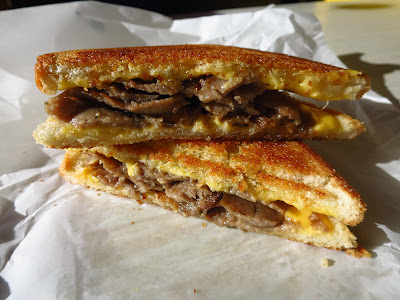