I got another spot on Armitage worth your time. Which has me thinking, is Armitage the city's best food street? Maybe. What I know for sure is the part that stretches West from California to Grand is filled with a handful of worthy stops. The most recent to open is the city's second Venezuelan restaurant. Located in a former cafe in Hermosa, Rica Arepa has quickly become a favorite of mine. 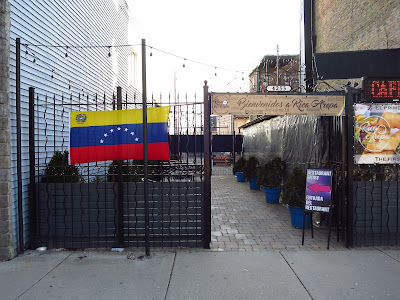 I've gotten pretty familiar with Venezuelan cuisine over the years. Mostly through my time in South Florida but also thanks to a Venezuelan spot in Madison Wisconsin that I used to frequent. It's definitely a rice and beans cuisine similar to other South American and also Caribbean countries. Rica Arepa is a family operation. I've had a chance to chat with the young man who runs it and he's a really nice guy with a passion for his food. Makes sense bc Rica Arepa is making some great arepas as well as other Venezuelan favorites. The arepa is to Venezuela as the sandwich is to America. Everyone eats them. It's more than likely the country's signature eat with options being endless. 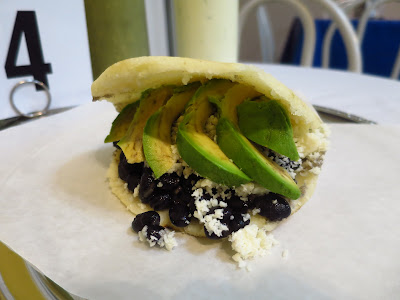 Arepas are traditionally made cooking dried corn, mashing it, and then drying it into a flour before shaping into a pocket. In Venezuela they tend to mix a bit of lard into the mixture making them a tad greasier than their Colombian counterparts. Arepas are a great snack source during morning and day and they also make for a great late night treat. Thus they tend to be stuffed with savory fillings like shredded beef, plantains, and cheese. Rica Arepa makes really good ones. They also make a Patacon. What you see in the picture below isn't a jibarito it's a Patacon Pisao. They like to make plantain sandwiches in Venezuela too but they do so differently. This one has pabellón (shredded beef), ham, lettuce, ketchup, mayo, mustard, cheese. It's shape is a more perfect circle than the jibarito and the fillings are different but it's same premise with the smashed plantain acting as bread. 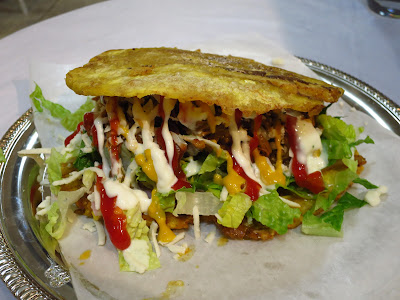 I think I prefer the Puerto Rican plantain sandwich bc of both the garlic and the melted processed cheese but this is still a mighty fine way to kill a large appetite. Then there's the specials. On the first Sunday of the month they do Venezuelan style empanadas which I had never tried until last weekend. Of course they're made with corn and they're about twice the size of all other empanadas. Stuffed with the same style of fillings in an arepa and fried these are a special treat. In fact I follow Rica Arepa on social media and all of their specials look wonderful. Inside is small with only about 16 seats for but once the weather clears they have a huge side patio which will be great. Go check them out. 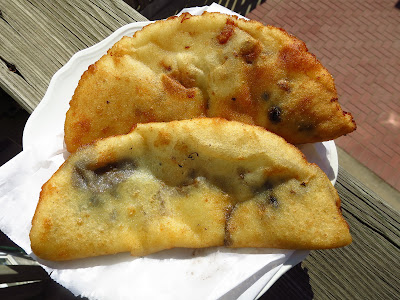 Great post on "Rica Arepa" ". As a professional chef i have to appreciate your work. Keep Posting useful posts like this. Keep in touch with my websites- Culinary Institute | Chef Training Institute

Very informative article, which you have shared here about the comida venezolana en Vigo. After reading your article I got very much information and it is very useful for us. I am thankful to you for sharing this article here.comida venezolana