Is this the year of Dominican Fried Chicken? Probably not but I have another spot worth checking out. Tipico Chicken opened some time in the last four months. It's bright yellow awning caught my eye one day while driving down Fullerton. The fact that it was a chicken restaurant made me want to check it out. Not just that but it was a spot featuring the foods of both the DR and Honduras. 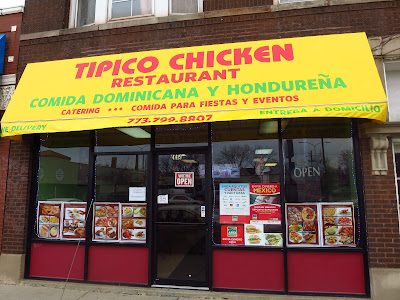 I'll tell you what 2018 might be and that's the year of the female-led kitchen. Like so many other spots I've featured this year Tipico Chicken is run by a team of ladies. The leader of whom is from the Dominican Republic. The menu features favorites from the DR as well as some popular snacks in Honduras such as rolled tacos. Fried chicken from both countries is offered. Since I was talking to the Dominican lady we went with the Dominican fried chicken also known as pica de pollo. Like everywhere else in the Caribbean the people of the DR like to fry their chicken hard. This results in an extra crispy breading which was the first thing you notice with this chicken. It's about as crispy as it can get which means the meat suffers a bit but when paired with their excellent black beans and rice this was a helluva lunch that was about as filling as any recent meal I've had. The question I'm sure some are asking is it on the level of the pica de pollo at Morena's? Not quite but still delicious. 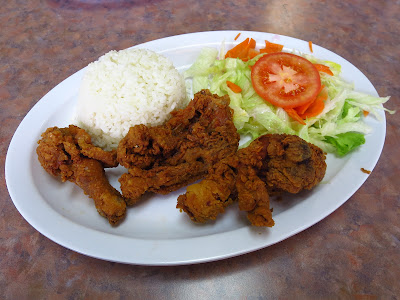 Always on the prowl for new to me things I can try I saw something called "yaroa" that caught my eye. I did a quick google search and came to learn this is a popular street snack in the Dominican. Not much different than salchipapas this popular snack is made using french fries as the base and then on top of them goes ground beef, sauces, and maybe some cheese. I read that in some cases the base is fried plantains and sometimes yucca. I'm guessing that much like salchipapas everyone makes them a bit differently. Tipico Chicken puts mayo, ketchup, mustard on top of theirs. This is like the Caribbean version of chili cheese fries. I could enjoy a plate of Yaroa late night after some beers. 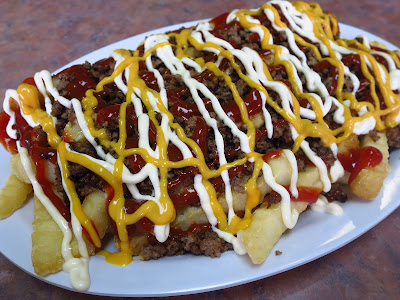 Great post on "Tipico Chicken". As a professional chef i have to appreciate your work. Keep Posting useful posts like this. Keep in touch with my websites- Culinary Schools | Cooking Schools

Good content. Keep up the great work and keep sharing your reviews.

This is a very kind of you. Thanks a lot for sharing so interesting content hardly can be found elsewhere. Keep up the good work!
cheap cigarettes