My trip to Steak Out all the way towards the North end of Western avenue was my third attempt at understanding New York style Steak/Chicken & Rice. The dish made nationally famous by Halal Guy's is one of the signature snacks of NYC. It's known for being there when you're drunk and or in a rush. While Halal Guy's has gained a national following (not me) many spawns have popped up not just in New York City but all over the country. Steak Out is the second one I know of in Chicago. 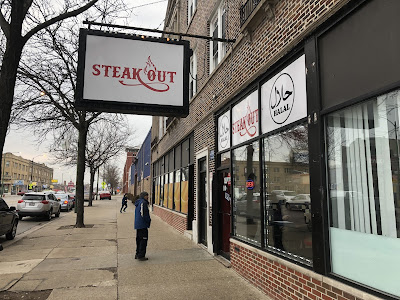 I love the dish that is meat and rice. It's one of the foods I crave most often. Every region on the globe has a varying recipe on this dish. So while I love the idea of NY style Chicken (or Steak) and Rice, I don't get it's appeal. I hate to say it but Steak Out was near inedible. I got their signature combo bowl pairing steak with chicken and it was so salty I couldn't get past the first few bites. The meat and veggies were layered on top of the rice which I hate. But the rice itself somehow even managed to be bad as it was swimming in a pile of liquid that totally voided its flavor. I dont know what happened but I cant imagine anyone actually thinking that what I was served was anything other than awful. 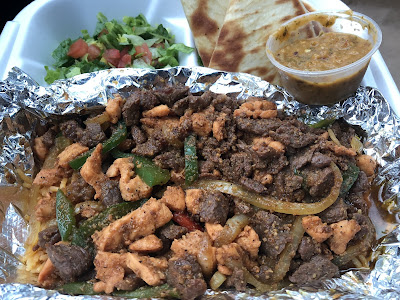 Steak and Chicken with Rice at Steak Out