Baseball is back! My Cubs are once again looking like contenders (I dont care about the slow start). What's looking a bit different these days is Wrigleyville. Lots of new buildings and with them new businesses. If you watched any type of local news this past week I'm sure you saw all the change. It's not the end of the world for me as money is what you need to win and the Ricketts family seems to be stacking cash these days. As long as they stay winning then who the hell cares if people from Iowa like to make a vacation of a weekend at Wrigley. The change started happening long before the Ricketts arrived anyways. Long gone is Yum Yum Donuts and Hamburger King is only a shell of it's former self. But at least in the case of HK you can still get a little piece of it at Rice N Bread. 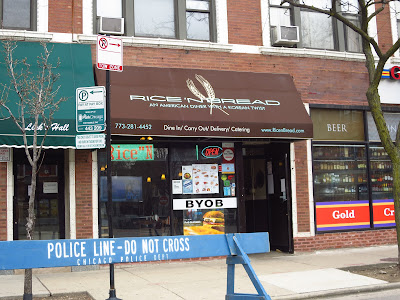 For those unaware Hamburger King was the name of the business where Rice N Bread now exists. The owners of Rice N Bread bought the business from Hamburger King's owner Sonia a couple years ago. Part of the deal was that Sonia would stay on for about six months and help the family ease into their new venture. With that they kept a few of the classics that made HK a legend in the area. I still go here mainly for those items. Stuff like Akutagawa as well as rice and gravy. But when the family took over they added an almost entirely new menu with a bunch of Korean favorites. To learn more about the dishes from Hamburger King that they kept on the menu click HERE. Today's post features a few of the new dishes that I've enjoyed since they took over. Items like Dolsat Bi Bim Bop below. 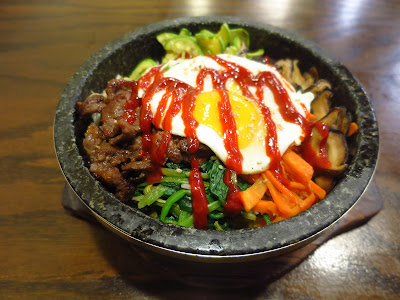 To get a gauge on any Korean restaurants food start with the bi bim bop. Extra points for places cooking it in a Dolsot aka stone bowl. This allows the rice on the bottom to get nice and crispy and that to me is the deal breaker between a good and great bi bim bop. Other items I've liked include the spicy don galbi which are marinated pork ribs with a similar eating style to Italian neckbone gravy. 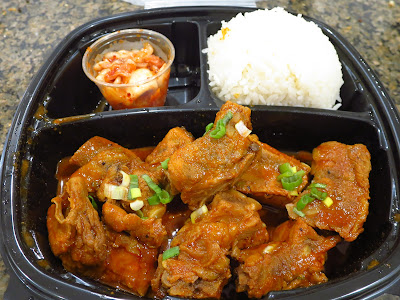 On Thursday they have a bacon kimchi fried rice special. It's the inspiration for one of my signature dishes that I've kind of created over the last couple years. The first time I tried this dish at Rice N Bread it was about as good as any fried rice I'd ever tried. Unfortunately a second visit for it wasn't nearly as good. From my own experiences in coming up with the perfect recipe it tasted like they cooked the kimchi too long on the second try. Hopefully that was just a one off. In the end this is one of the only places I would recommend going for food before or after the game as most of the bars and newer spots push nothing but inflated prices on average goods. If you want a taste of Old Wrigley stop at Rice n Bread for Akutagawa and then go sip Old Style at Nisei Lounge a few doors down. 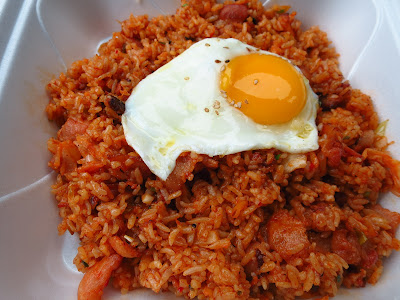 I live a block away (and get their spicy don galbi sometimes) but I didn't know about the rice or the old HK items. Learned something new about my local place!

To the locals it was always known as Chesters. I still remember the big chopping block in the back where they made all those great fries. Their fries and gravy were the best ever.