I'm not a Forest Park (or OP) native but I share a common love with many of them. Sub Tender being the crush of many locals from around this way. I didn't develop my crush until my college days. Heck maybe even right after those had ended. A few college friends from around this way had brought me to one of their childhood favorites when I was hanging with them in their backyard. Sub Tender being a prototypical Chicago style fast food shack where sandwiches are featured. In many cases these places are spots that used to be Mr. Sub franchises. I'm not sure what the deal with Sub Tender's lineage is. I just know they've been a favorite of at least a couple generations worth of Forest Parkers. 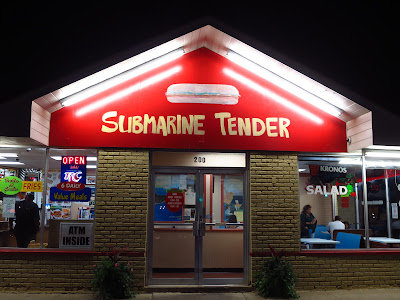 Locals Favorite in Forest Park
As the name suggests this place pushes submarine sandwiches. Though I'm not sure what the tender is all about. I wouldn't call these subs Chicago style but there's alot of spots where they're making sandwiches in the same way of Mr. Sub which still has a handful of locations in the city. Sub Tender is the best of them from what I've tried. You don't come here for a perfectly curated sandwich as far as the ingredients go. This place is most popular when the sun goes down. But they do a better job than the others when it comes to their submarine sandwiches. The meats are of the typical variety you find at this type of spot but the sesame seeded bread seems to be better. Much fresher than most. Maybe this is bc they sell so many of them. Of course a nice pour of oil also helps elevate these cheap but tasty sandwiches. There's a time and a place for a Sub Tender sandwich in my life. 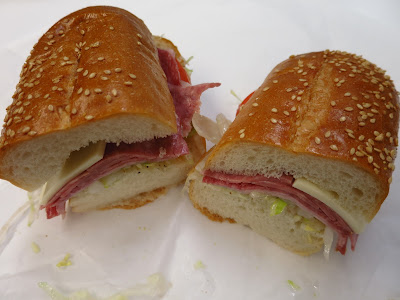 With this being a Chicago style fast food shack at heart they have all the other crap you can imagine too. I mean that as a compliment. Sometimes there's nothing better than one of these spots where you can choose between subs, gyros, hamburgers, hot dogs, Italian beef, and more. My trick is to really dig into the menu offerings and find the things you wont find everywhere else. Bc lets be honest the gyros from here taste the same as everywhere else. Same goes for the pizza puff and so on. One of the items that locals love here are the "BGF" which is short for butter garlic fries. They're seasoned with something secret. I like them now and then but my go to item which I admittedly don't eat often is the ham and cheese pita. It's nothing special but they prepare it very well. Starting with browning the ham on the flattop and putting it over the cheese which melts it down nicely. Everything on it is mayo, lettuce, tomato, and oil. It's not a gastronomic wonder but it does hit the spot around Midnight. 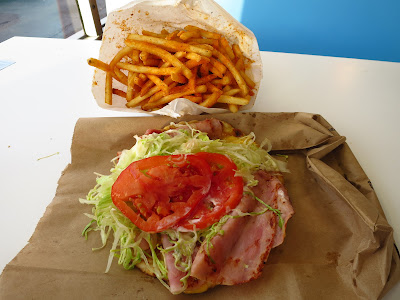 "Sub tenders" are support ships for the pigboats. So, riffing off the "sub"marine reference of the sandwiches.

Only squids or .mil-history types are likely to catch it, though.