-Grubbing in Chicago  New to the 'Scene'

Joe Flamm turned his Top Chef Season 15 win into his dream restaurant in Rose Mary. Ever since it's opening in the Spring of 2021 it's been the hottest restaurant in town. It's Fulton market location gives you an idea of the money that was invested in it. Rose Mary is the former Spiaggia chefs debut restaurant. The menu is Italian forward with lots of Croatian influence which comes from his wife's background. It's the hottest reservation in town but I can tell you from personal experience that if you're willing to arrive 15-20 mins ahead of opening you should be able to get seated quickly. It's a large space and there's a nice sized patio out front which sits on one side of the corner location. 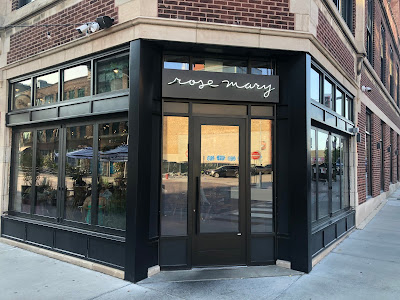 Newly Opened in Fulton Market
The early reviews on Rose Mary have been quite mixed. From my perspective it seems like the city's socialites and instagram influencer types really like it. But the reviews from the city's dining critics and other food driven types haven't been as hot. We (my wife and I) watch Top Chef so I've been familiar with Flamm since he starred on the popular Bravo TV cooking competition. I looked forward to trying Rose Mary when I first heard about it but at the same time I wasn't in a rush. Reservations have been booked for months out since it's opening and I'm just not the type to plan that far ahead unless I know I'm going to be in a certain place on vacation somewhere overseas or whatever. But we'd heard from a few others that they just got in line before opening and were seated not too long after 5p so that's what we did - an early dinner. If you follow the news and the food worlds news in particular you know that most restaurants are understaffed at the moment. I wont hold anything against Rose Mary for this but service was just so so because of that which may have contributed to some inconsistent timing with the delivery of food to the table. Still that was the least of our problems on this visit. 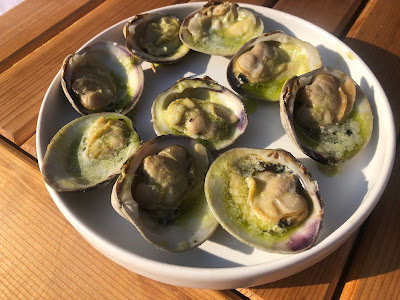 Grilled Clams (smoked ramp butter)
We ordered up a few things to split ahead of our entrees since we were each going different ways for that. First up was an order of grilled clams with ramp butter. I thought these were pretty good, but when has the taste of clams and butter ever been bad? The answer is rarely if ever. Next up was a plate of the zucchini fritters which I read have been tweaked over time since Rose Mary first opened. They come served with a refreshing pesto aioli and overall this was my favorite dish of the three starters we tried. I liked the flavor and also the consistency of the zucchini but if there was one minor complaint it seemed like they were a bit oily. Possibly from the fryer oil not being fully heated. 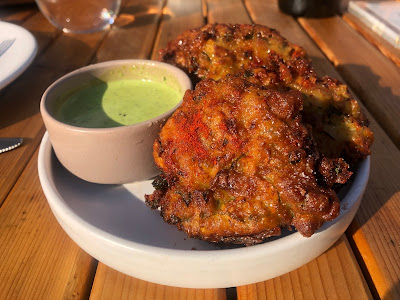 Zucchini Fritters (pesto aioli, parmigiano, pine nuts)
The pasta part of the menu has some intriguing options. If you too watched Top Chef you may also remember that pasta was a favorite of Chef Joe Flamm when it came to his cooking. So we were intent on trying at least one pasta and ended up choosing his Tortellini Djuvec which was more of a Croatian leaning option than most of the other ones. It was the most interesting to me. This dish suffered from the pasta being a bit too hard in some spots especially where it was folded. 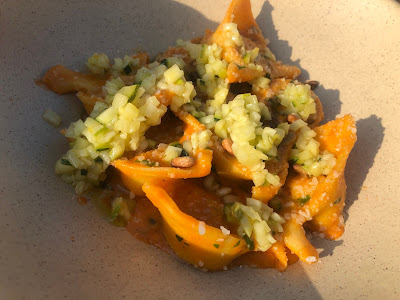 Tortellini Djuvec (red pepper, eggplant, preserved zucchini, parmigiano, pine)
The current menu features a few different risottos including a Midwest roast corn option described as including gran mugello cheese, pickled peppers, chives. That was for her but I did get a try and I liked it but thought it might have been a bit overdone. By this point some entitled older rich white couple came strolling onto the patio with two large Bernese Mountain Dogs on what was a windy night. They were seated at a table close to ours and it wasnt long before my wife found a dog hair in her drink (those things shed like crazy). I'd later find one on my finished plate of something else and just the fact these dogs were allowed to be there pissed me off. The restaurant didn't care bc half of the employees came over to pet them which I think made for more hair in the air. My wife did get her drink replaced but the whole thing was a total turn off as these dogs were maybe 5-6 feet from us. If there had been others at our table (we were seated at a four top) the dogs would've been all over them. There wasn't a ton of room and they're big dogs who weren't just laying there. Not right. 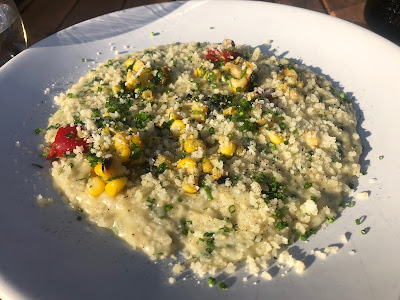 Midwest Roast Corn Risotto (gran mugello cheese, pickled peppers, chives)
Maybe if we didn't have to wait more than 30 minutes between receiving her risotto and my cevapi we could've avoided the hair of the dog but for whatever reason it took quite a long time to get the cevapi to our table. I watched as other orders came out (we were the first table to order) so it's possible our waiter forgot. Not a deal breaker for me as he was waiting all 7-10 outside tables with the help of the kitchen staff bringing food out when ready. Anyway I ate a piece of the cevapi there before asking for a to-go container for the rest of it as I didn't want dog hair on it but also bc I was stuffed from the single piece. For each piece of cevapi there's a slice of terrific fresh baked bread called lepinja. The traditional accompaniments of ajvar, kajmak, and diced red onion comes served on the side. It's a nice portion of the popular Balkan snack consisting of a skinless sausage typically made with beef and lamb. The cevapi at Rose Mary was redder than any other I've tried. I'm not sure why that is but it had the look of Argentinean chorizo which isn't a bad thing it's just likely they put their own little touch on a dish that’s typically pretty traditional from spot to spot. My favorite bite of the meal. 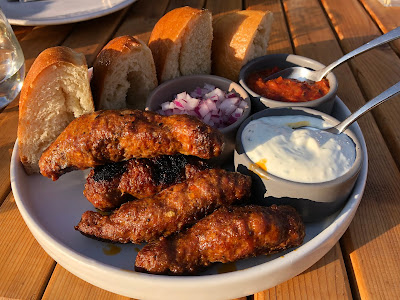