-Grubbing in Chicago  New to the 'Scene'

One of my favorite restaurant openings this year comes from an unlikely neighborhood. Lincoln Park is by no means a food dessert, there's plenty of good spots to eat, but it's not a neighborhood known for hot and trendy openings. Maybe trendy isn't the right word for Bocadillo Market which is paying homage to Spain's culinary traditions through a lunch program, dinner, and also a small cafe and market. It's a passion project from a husband and wife team and you can feel the love put into it. 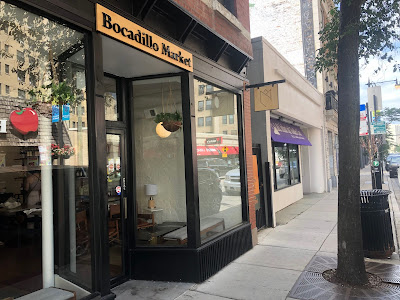 Newly Opened in Lincoln Park
Bocadillo Market is a cafe (day), market (all day), and restaurant (night) ran by a chef who comes from DC and is serving up some must seek out sandwiches by day and a complete Spanish influenced menu by night. The sandwiches themselves are reason enough to make the trek over to Lincoln Park as these are works of art and I say that as a sandwich artist myself. Bocadillos are what they call baguette sandwiches in Spain and Bocadillo Market is doing up a handful of carefully curated options including the classic calamari variety (seen below with herb aioli, piparra peppers, and lemon). Each sandwich comes with a small side of patatas bravas so good you’ll want to grab an extra order immediately. Meanwhile the smoked lamb rib bocadillo is the best sandwich I’ve had all year. It's described as smoked lamb rib meat served with a Nora Pepper aioli, fresh herbs, pickled green beans and carrots. The smoke flavor was alive and kicking in this one. I'd like to try the other sandwich options including their cheffed up version of a simple grilled cheese and tomato soup. 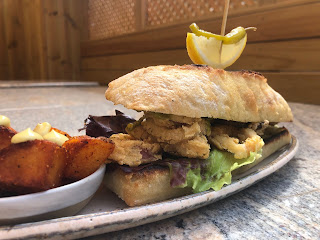 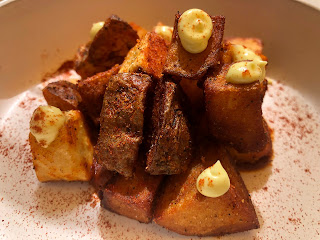 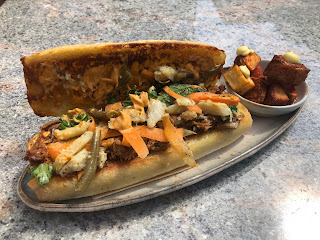 Lunch at Bocadillo Market
We liked the lunch menu so much we returned for a small dinner of sorts a week or so later. The dinner menu has a few sections including a nice selection of classic tapas given the fancy chef treatment. We started off with an order of wild mushroom and artichoke croquetas (with summer herb lemon aioli). I'm still chasing the peak of croquettes which I reached at a random bar in Madrid but these were pretty good by North American standards. Moving on to a pleasant bowl of clams and hake served in a salsa verde broth with smoked hake and herbs. You'll want extra bread for that one. Squash blossoms are one of my favorite seasonal summertime farmers market snags. Chef Martin and team dress them up wonderfully with sobrassada, goat cheese, and rosemary honey. The best bite of the night came out last which was fitting bc the foie gras served atop Spanish French Toast with berry and beet jam and snap pea salad ate like a luscious dessert. The best foie gras dishes I've had seem to all come from Spain and this dish was on par with some of those. Foie Gras is always good but this prep was extra good. Bocadillo Market is a contender for best new restaurant. 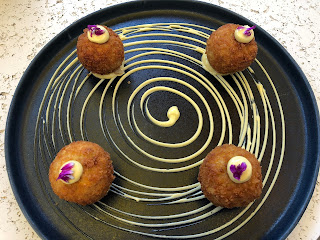 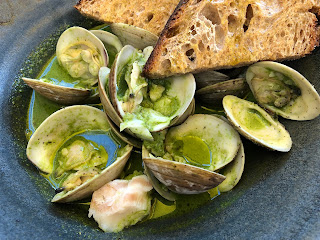 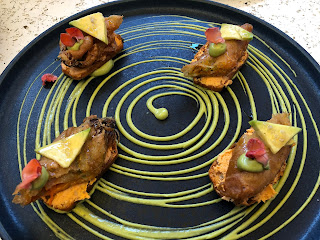 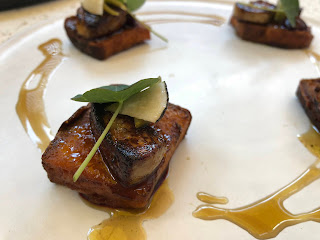