How about a little bit of Chicago nostalgia this week? A few months ago I was thinking about the city's hyper local fast food establishments. You know the type of spots that almost every city still has. They were once all over but nowadays there's only so many left. I thought of three spots in Chicago that would qualify. I thought about doing a little special round-up but I've already covered two of them. You can read up on Brown's Chicken HERE and on Pepe's HERE. The third was Mr. Submarine which we will visit today. I think I was maybe 20 years old the last time I was here. 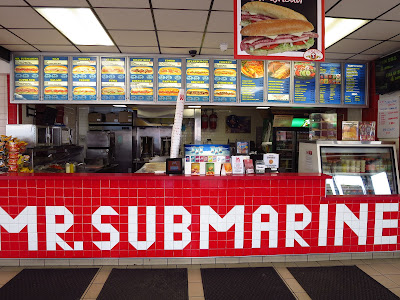 Mr. Submarine got it's start in 1975. Today they have 25 locations scattered about Chicagoland. One of them is in Lincoln Park on Fullerton not to far from where I grew up. But we never ate there. I remember going to Mr. Sub a few times on the Southside when hanging out with my cousins in Beverly. My recent visit to the one on Ogden in Berwyn transformed me back to my childhood as soon I stepped inside. The distinct menu was still the same generic looking pictures. I love it! Mr. Submarine is known for their cheap sandwiches including the original Mr. Sub. It's made up of mystery meats and onions that taste like they came straight from the bag but for alot of folks there's nostalgia involved in eating one. Their other signature sandwich would have to be the gyros sub. It's a Chicago classic in that the gyro cones the meat comes from are a Chicago thing through and through. Gyro meat is sliced onto their sesame seed bread with Tzatziki and onions. Label me guilty. 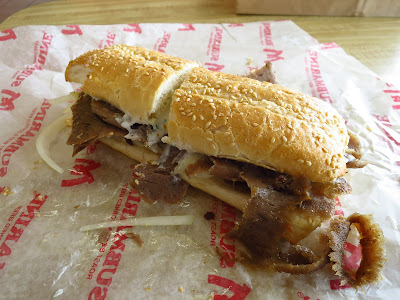 Mr. Submarine
Locations across Chicagoland
Posted by KingT at 11:11 AM