Remember Food Courts? Before they became food halls they were the spot to indulge in pizza, pretzels, and bourbon chicken. Admit it you enjoyed one of those things mentioned in a mall at some point in time. They were a part of the shopping experience. Well the shopping experience has moved online and the food court has transformed into the hall but a few of the old school ones still hang. Today we visit the food court inside Golf Mills Mall in Niles. Doing so is a step back into the 90's. 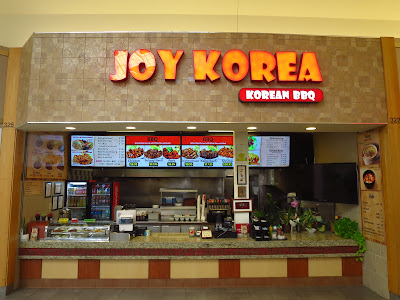 The Food Court at Golf Mills Mall is host to a "Japanese" Teriyaki Chicken spot, a "Cajun" Bourbon Chicken spot, and also a Korean BBQ place. Notice how I didn't put Korean in quotation marks. Joy Korea is a legit little spot for lunch should you be in the area. It's an independent spot run by a husband and wife team and they're cooking Korean classics with an emphasis on BBQ. But it's the Donkatsu that people rave about so I had to try it out. While it might not be anything worth leaving the city for I found it to be an excellent mall style lunch and so much better than the sweet shit the other spots push. It's a fried to order breaded pork loin that's chopped into strips when finished and served with a trio of dipping sauces including traditional tonkatsu sauce. It's easily two meals which is pretty much how I remember all meals served at the malls of Yester-year. Make America Fat Again. 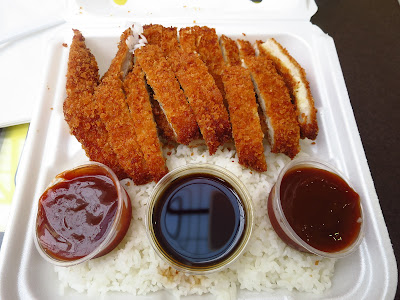