When I first saw the coming soon signs for Lucy's I thought we were getting Juicy Lucy Margaritas. How could I not. When you look at the Lucy's Fried Chicken in Austin, TX it's virtually the same thing as Lucy's on California in Humboldt Park. But they aren't affiliated in any way that I know of. They both just happen to be throwback spots called Lucy's that are slinging comfort food. Both of whom have a red headed white girl as their mascot. Could a lawsuit be on the fringe? I hope not. But people can be petty. Anyways Lucy's in Humboldt Park is the new brick and mortar of an old Chicago food truck that goes by the same name. They opened up shop within the last couple months. 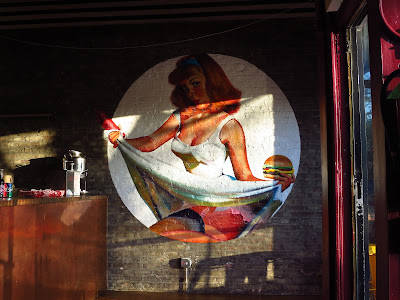 We stopped into Lucy's on a recent summer day and it's a nice space. Old school spot with lots of refurbished wood and a couple communal tables as well as seats along the windows overlooking California. It's a walk in and order your food and take your number and go sit type of spot. The menu features the two things they were known for when they were on wheels which are fried chicken sandwiches and double cheeseburgers. Both of which pair well with their fresh cut fries. We tried a chicken which comes with nicely fried thighs in between a sturdy brioche bun. Other toppings are pickles, sauce, and cheese. Good stuff as were the fries. I didn't have one but I suspect they'll be selling alot of milkshakes this summer. They should fit in really nicely on this developing block. 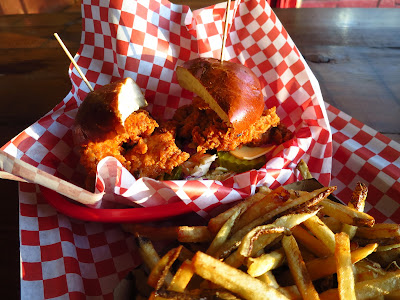