It's been a while since an exciting Mexican spot opened up on North Clark. Maybe that's bc there hasn't been many closings up that way. Well a new spot on the 7000 N block has popped up. It goes by El Sabor Poblano which is a hint to what you're going to find inside. They specialize in food from Puebla but not the type of dishes that you're probably most familiar with. There is no cemita or taco arabe. My guy Mike Sula at The Reader got the complete lowdown this summer. Find it HERE. 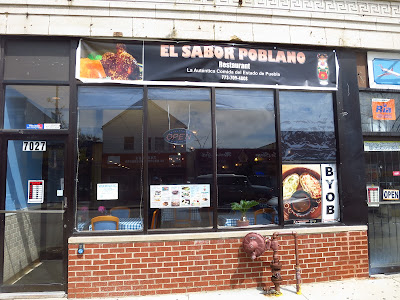 Like so many of the other Mexican restaurants in the city this is a complete family operation. The grandma of the Moso family is somewhat of a legend back home in the town of San Juan Pilcaya. She was the villages go-to for many of it's traditional recipes. Though the picadita isn't exclusive to Puebla it's enjoyed there and really anywhere where there's a grandma cooking. That's my perception of them anyway, I don't know if many young people still make these. But then again they're as prevalent as ever on restaurant menus in Chicago. The best I've had are the ones from here. They're little boats of fresh masa cooked on a flattop and thick enough to be filled with onions, queso, salsa. You can get green or red or if you ask nicely they may let you go New Mexico Christmas style. 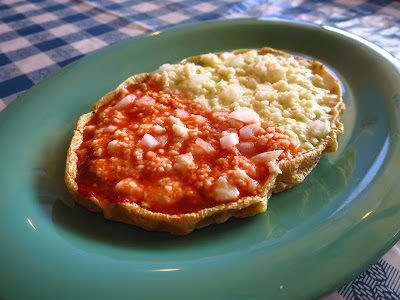 Anything made with corn from here is going to be great. They use a yellow corn blend which one of the city's tortillerias makes special for them. In his article Sula gives the nod to the fried quesadilla and any of the tacos which use said yellow corn masa for the tortillas. Some labor intensive dishes are only available on the weekends but both moles are always an option. In Puebla they make alot of green colored mole poblano as it's called. Grandma does a really good one here and same goes for the mole roja which comes with black bean tamales. Not sure if the tamales were just made earlier in the day or possibly the day before but they were a bit dry. But the red mole sauce made them better. 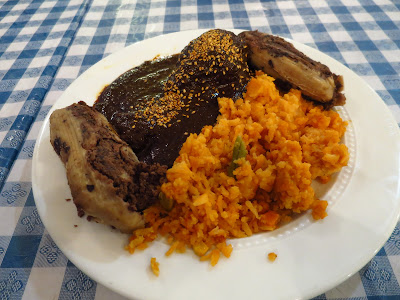