With the 4th of July holiday upon us we're celebrating with burgers! I recently went out to Columbus for a work related event and stopped at some bucketlist burger spots on the ride there. Is there anything more American than the old school hamburger stand? You'll find them throughout the Midwest and Ohio is a hotbed. The hamburger history here runs deep with many long time spots still hanging on. Today we take a look at five of them all of which have been around a long, long time. 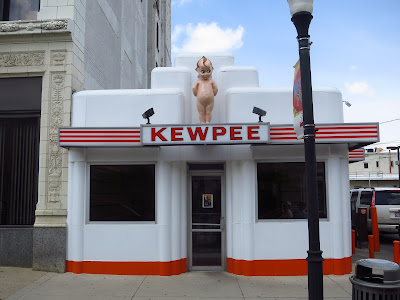 Meet the burger that inspired Wendy’s. Born in 1923 in Flint, MI the Kewpee empire once reached 400+ locations at its peak pre-World War II. Today just five survive with three of them based here in Lima, Ohio where they moved their headquarters a few decades back. This location debuted in 1928 with its signature Streamline Moderne design featuring porcelain enamel and stainless steel. As a young lad in Kalamazoo Dave Thomas lived near a Kewpee and it inspired him to enter the burger business. Notice the square patty? Wendy’s probably got the idea from here. Beef is delivered fresh daily which is just one of the many things that makes the remaining Kewpee’s a true blast from the burgers storied past here in the Midwest. The other two remaining locations are in Racine, Wisconsin and Lansing, MI. I can now say I’ve completed the Kewpee trifecta. They're each American treasures. 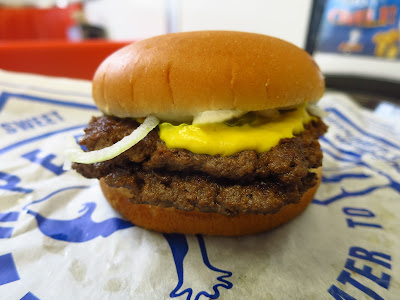 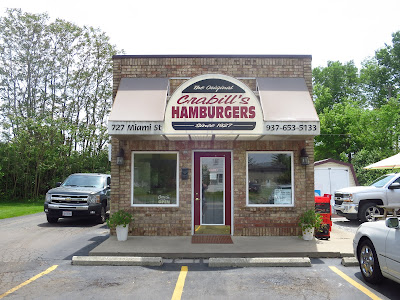 The next stop is a spot that was pretty much #1 on my burger bucketlist. Crabill's Hamburgers in Urbana Ohio has been frying up sliders since 1927. There’s probably less than ten spots left in the world that make real deal sliders and I’ve been to most of them. But Crabill's was always high on my must visit list going back to the glory days of Roadfood. It's also featured in my guy George Motz's Burger Bible aka Hamburger America. As you can see in the picture above it's a super small space with room for maybe eight people. Most folks take them to go and at just $1 and change for a double (it's not even worth ordering s single) most folks take a dozen+ to go. I started with 3 and a hot dog. 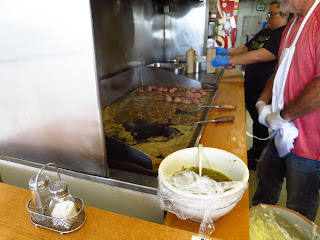 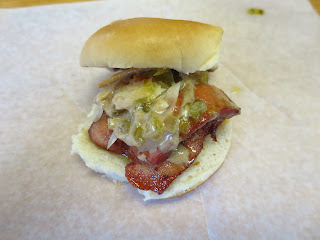 a peek at the grill (top) - Hot Dog Sandwich (bottom)

The grill at Crabill's is a sight to behold. It's basically a large puddle of grease and the burgers lay in it about halfway down. They cook them by flipping spoons of grease on top. Essentially these are little fried balls of beef and they're glorious. About as OG as an old fashioned hamburger can get. These weren’t just the best sliders I’ve ever had they were one of the best burgers I’ve ever had. Anywhere. At just a buck and change for a double it’s easily the best bang for your buck burger I’ve ate. Everything is their house brown mustard, relish, and of course onion. I ate three plus a hot dog (bomb) and took four to Columbus with me. Two of which were ate for breakfast the next morning. 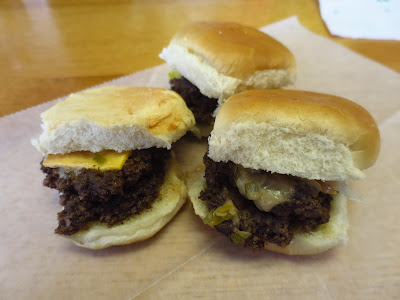 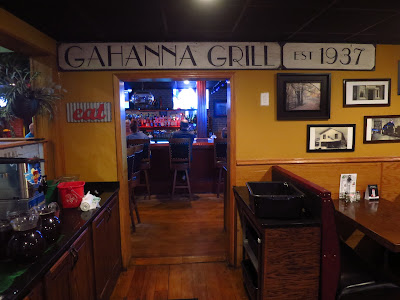 This old school spot that's also been shouted out by George Motz wasn't far from my residence in Columbus. On top of that one @BurgerBeast was also in town doing a book signing for his new book on the history of the hamburger in America. He lives down in Miami and we had tried to connect a couple times previously and here we were both in Ohio and both at the Gahanna Grill where we met to try their famous Beanie Burger. This is their signature eat. It's a nice 1/3 lb patty of locally supplied beef with bacon, cole slaw, and your choice of cheese. I tried mine with the Cole slaw on the side and some onion rings in place of fries. I just put a couple spoonfuls of cole slaw on top and it worked nicely. It was a very satisfying burger for me and a nice change of pace fro the previous two I tried earlier in the day. Gahanna Grill is a local landmark in that they've been serving the area since 1937. 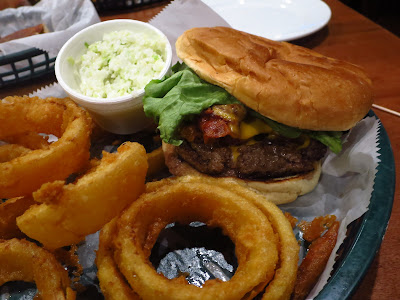 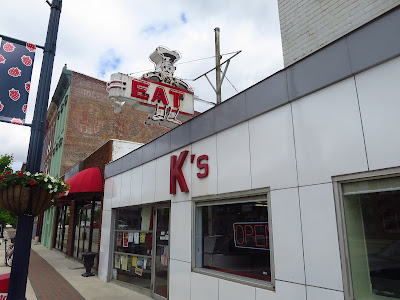 Head to this suburb of Dayton to find a perfect 1930’s style cheeseburger. Not much has changed at K’s where they’ve been at it since 1935. The burgers are cooked on a nifty little setup where they’re both griddled and fried. Check my instagram @chibbqking for video of the burgers being made. Fresh 3 oz balls of beef are left to cook for a minute before being flattened into a shallow puddle of grease. While most old school spots like this offer up all the toppings you’re ruining it with anything more than mustard, onion, and pickles. At just $3.55 for a double this was so much better than most every double digit price-tagged burgers I’ve tried. The chili was just ok but the chocolate frosted malted was money. Sound familiar? You know Dave Thomas spent time in these parts so it’s no coincidence. Another Hamburger America spot checked off. Props again to George Motz for blazin’ da trail. 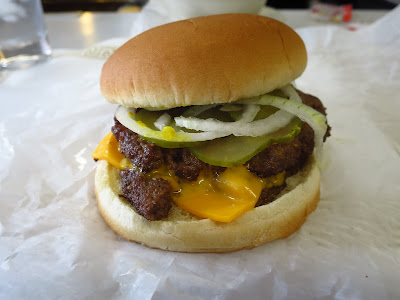 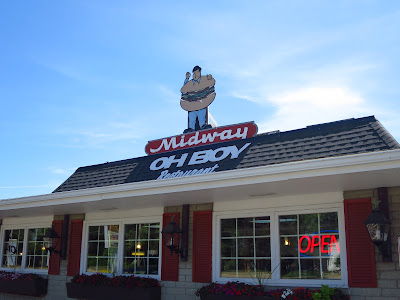 Next stop up is en route to and from Cleveland so it's a little further north than the previous four which were all lumped together. I stopped in here more than two years ago but I'm confident it's still the same. That's bc the Midway Oh Boy has been operating in Elyria, Ohio since 1953. I believe I found out about this awesome little spot from Chef Michael Symon who I read grew up on these. The double decker burgers are in the same style as some of the other long gone franchises that were making them this way. Some still survive like Frisch's Big Boy which was what inspired the original owners to create the Oh Boy! So the story goes when the matriarch finally nailed down her secret sauce the patriarch tried it and said "Oh Boy!" and the rest is Ohio hamburger history. I loved my trip in here. 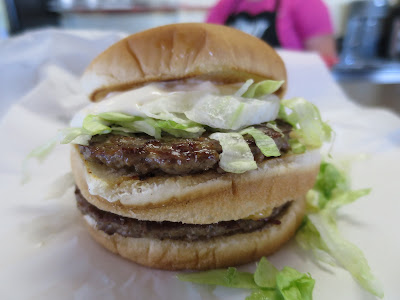 The special sauce on the Oh Boy! burger resembles tartar sauce. It worked really well as I love a good double decker burger. The Big Mac was my preferred order as a kid when visiting McDonald's but the Oh Boy! is much better than that crap. The menu here is more than burgers. With it's NE Ohio location they have daily specials of the Hungarian variety. I was lucky enough to be visiting on cabbage roll day and took one to go. I regretted not getting a few more the rest of the car ride home. 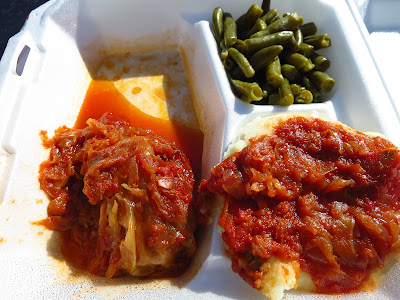 See ya next time @chibbqking
Posted by KingT at 11:34 AM

There is a Kewpie Diner in Racine

I have visited here many time. Double Cheese burgers are the best
as is their HOMEMADE Root Beer