As far as I'm concerned there's always room for restaurants where they're cooking with charcoal. I'll take anything I can get as far as live fire cooking goes. Well the people of Jefferson Park have gotten themselves a nice one. El Asadero Colombiano opened up in the former Beef Belly space at the corner of Central and Lawrence. It's a Colombian style rotisserie chicken grill as seen below. 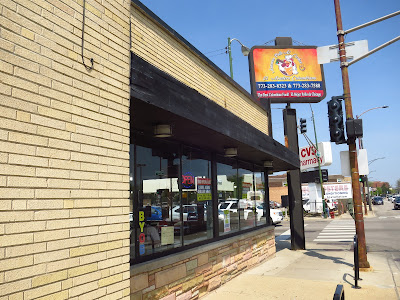 The menu here is pretty similar to the other Colombian chicken joints around town. I'm not sure if there's a connection but it's not a bad thing that they're similar. These Colombian style rotisserie chicken joints are great places to eat on the cheap for the amount of food and flavor you're getting. This is especially true at lunchtime when they have a couple of fantastic lunch specials. You can choose between chicken or steak and on a recent visit we had both. They were equally great. I'm not sure if the steak was grilled over coals but the thin strips had a wonderful smokey flavor going on. 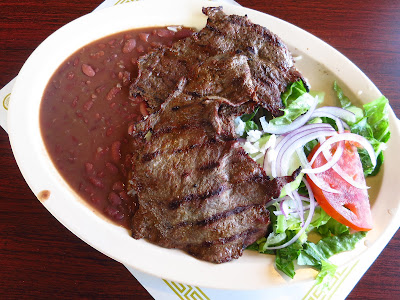 The chicken is on display behind the counter. You can hear the coals lighting up with grease each time it drips onto them. Another perk of going during the day is you're going to get the fresh cooked chicken. As the day goes on the chicken comes off and sits around waiting to be ordered. Thus I've had some average Colombian rotisserie chicken but only when the day was close to over. We watched as they took our chicken off the spinner and chopped it down for a couple of lunch specials. Both the rice and beans are very well made. Even the salad had fresh veggies so at just $6 a plate this is a great deal on a very satisfying meal. Judging by the lunch crowds on my visit it seems to be a welcome addition to the neighborhood. 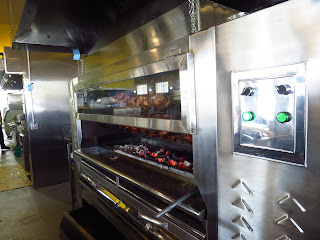 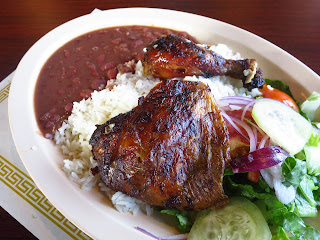 Lunch Steak Special -- is very Good - as is the price