Chicago is having a bit of a boom in fresh pasta purveyors. I've noticed a few new spots these past few months. One of them is called Tortello and it opened not too long ago on Division in Wicker Park. Tortello has gotten the attention of many of it's neighbors by putting pasta makers in the window. You'll notice them when walking by and probably stop to look at what's going on. Most people do. 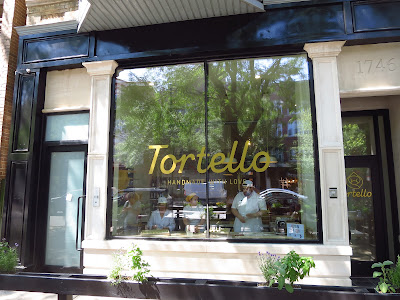 As soon as you step inside you'll notice all the fresh pasta behind the people making it. It's available to eat there or to buy by the lb for home. Tortello makes some interesting shapes including Chiusoni which is a rare find in these parts or really anywhere outside of Sardinia. That's where the owner and his family come from. I believe he told me it was him and his wife who run the operation. The executive chef comes from Lula Cafe and they even brought in a lady from Puglia who leads the pasta making team. It's a pretty casual operation in that you place your order at the counter and take a number and then a seat either inside or outside on the patio which is surrounded by fresh herbs grown for the kitchen. In two trips there we've been able to try a majority of the menu. That chiusoni is my current favorite of all the pastas on offer. It's made with sausage, saffron, and cream which sticks to the pasta like white on rice. The Chiusoni has the perfect bite to it. If you like it bitter Orecchiette is covered in rapini and bread crumbs with chile pepper. Again the pastas texture was near perfect. 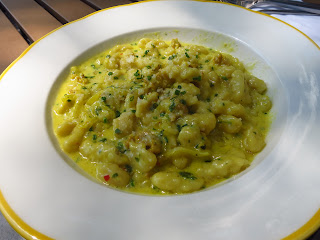 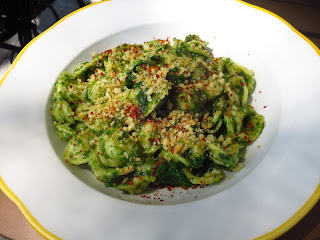 Chiusoni and Orecchiette at Tortello

On our second trip back which came just a couple days later we tried two different options. From the 'filled pasta' section of the menu the Cappelli Del Prete were wonderful. Filled with prosciutto and topped with radicchio and ricotta is a mushroom sauce. It was rich but was the type of dish you'd be happy to eat anytime of the year. The lobster bucatini was good in that the bucatini is fantastic. It's one of my favorite pasta shapes. But at $30 (with a tip) I thought the other options were much better deals as far as filling you up. While I'll always enjoy most any dish with lobster which was the case here I still felt it could've come with a bit more pasta considering the pricetag. You can always use more lobster but I'll never complain about not getting enough (it cost real money to run kitchens). In the future I'll probably just stay away from the lobster bucatini as I preferred the others. I have a feeling you'll be hearing more on Tortello soon. It's deserving of any attention it gets. True specialists. 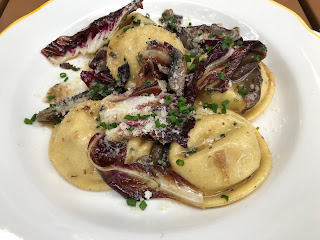