Watch out for Diversey. The strip from California going west is getting even hotter. That's bc what might be the city's most anticipated restaurant opening of the year just opened over there.  Superkhana International is the project from two local chefs. Both Yoshi Yamada and Zeeshan Shah have handfuls of well known Chicago spots on their resumes. After meeting in Chicago they started hosting a pop-up dinner series which could be considered the start of Superkhana International. They've enlisted the help of Jason Hammel of Lula Cafe fame who I saw working the line both visits. 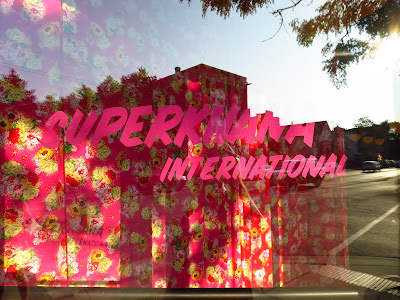 Indian food is having a bit of a much deserved moment. Not just in Chicago but across the US. It's nothing new to people of Indian descent but for whatever reason (some racial for sure) it's never been looked at as "fancy" in America. A string of recent openings have totally pounded on that perception. At a time when Culinary heritage is being celebrated there is perhaps no other cuisine that deserves to have the spotlight shining on it. Indian food can be pretty much everything. It can be spicy, it can be cooling, sometimes it's rich, sometimes it's light. Most importantly it's full of flavor. Though it's not defined by one flavor or trait. Instead it's a wide variety of aromatic dishes that can vary by region. 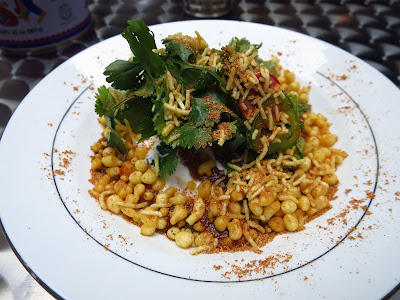 One important thing to point out before we get to the food. Throw away your authentic cards bc this is best described as fun food with an Indian influence. Nothing here is meant to mimic "authenticity" it's more like a shout-out to the flavors and creativity of a cuisine that both of the chefs adore. The menu is split up into two easy parts. Veg and Non Veg. An order of Channa Chaat is a good way to start a meal this summer. We've been in twice and on one of the days it was scorching hot outside which is a pretty common weather pattern in many parts of India. Chana Chaat is a savory way to cool down. Superkhana makes one with the traditional chickpeas mixed with tamarind, yogurt, sev, and fresh herbs. The perfect example of what makes Indian food so exciting. Lots of flavors and textures. 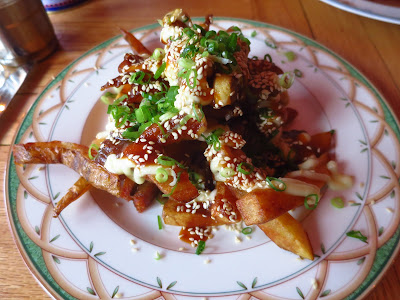 One of my favorite dishes thus far are the Manchurian Potatoes. Beautifully fried fries are topped with a Manchurian sauce which is common in Indo-Chinese cooking. Usually it's used to coat stuff like chicken and cauliflower but here they use it as a coating for fries with sesame, scallions, and aioli. I also loved the Chapli Kebab Salad. Chapli Kebab isn't a stick of skewered meat. It's a Pakistani grilling staple made here with minced lamb and veal that's heavily seasoned and formed into a patty. The grilled patties are topped with creamy baby potatoes, Asian greens, yogurt dressing. I liked how they didn't hold back on the seasoning. Lots of cumin and coriander. Good smoke flavor too. 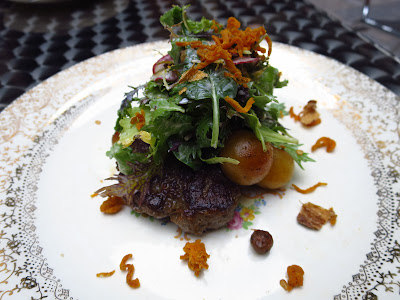 I'm not sure what the story with the Bombay Sandwich is but it seems as though it's always a grilled cheese and what else goes in it can vary. It's described on the menu as a "Mumbai Psychedelic Grilled Cheese with many, many things." What we got wasn't what I was expecting based off of other peoples pictures. We were served one with cheese, beets, and some jalapeno peppers among other things. Then it also came with a big cup of ketchup. As I learned after looking it up online ketchup is common with sandwiches in India. I looked it up bc I was fascinated with the fact a sandwich dipped in ketchup could be so good. One thing to point out though is Indian ketchup is much different than the American stuff most of us are used to. It's got a much more savory flavor. 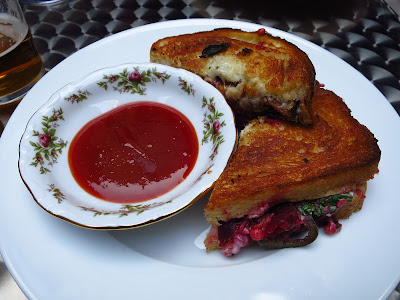 There aren't many large dishes as even the Pork Belly Vindaloo could easily be eaten by one. It's also a good plate to share in that it comes with two pieces of pork belly that's been cooked/sliced like porchetta. The red sauce is a bit vinegary and definitely intriguing as far as what else is in there. 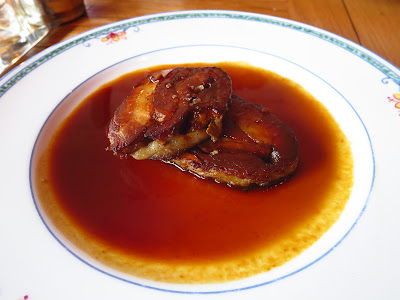 The Butter Chicken Calzone is the dish that can best describe what they're trying to do here. It's exactly what it sounds like in that it's a calzone made from naan and stuffed with butter chicken and cheeses. It's the "it" dish of the moment so to say. It's also a massive plate of food that can easily feed up to four people with other things. Bc there were just two of us we only tried a couple other things on our first visit which is what propelled the quick return. One small complaint the chicken was lukewarm but the bread and cheese were hot. I'll chalk that to opening week kinks to work out. 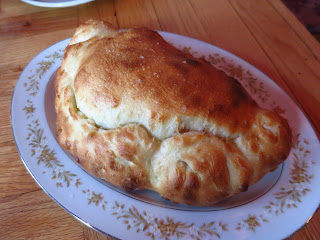 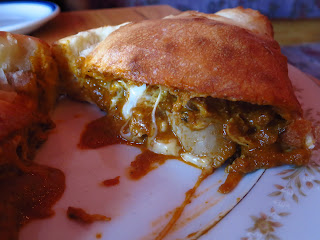 Sometimes I can pass on dessert. Usually when I'm too full from the meal. Other times when I'm just not interested (Note: I don't love lots of chocolate). But it seems like the folks at Superkhana know me in that if you put a little $3 ice cream sandwich on your menu I will order it. Made with rose water and saffron ice cream and cardamon candied pistachios in between a little Parle G biscuit cookie. I loved this and wish they'd sell them (and maybe some other finger foods) out of a side window. I'd stop for one every time I was driving by. The design of the place is also great. There's an open air kitchen and a really nice patio plus the bar and seating area. The menu already had a couple switches in between our visits. Expect different options based on the seasons bounty. Fun stop. 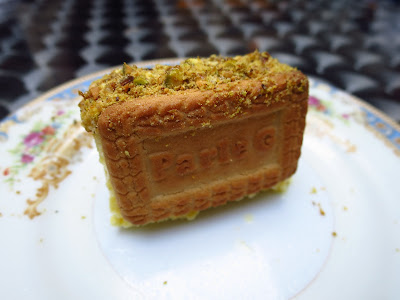