One of my favorite recent restaurant openings has flown under the radar since they touched down. Azzurra opened up on Milwaukee Avenue in Wicker Park late last year and quickly shot onto my radar with this review by Mike Sula from the Reader HERE. It's closeness in proximity to my GF's place was enough to make me stop in some day soon but his review got me in quickly. Azzurra comes to us from the same guy behind Anteprima in Andersonville. As Mike points out, Azzurra has alot of the looks and feel of Anteprima. 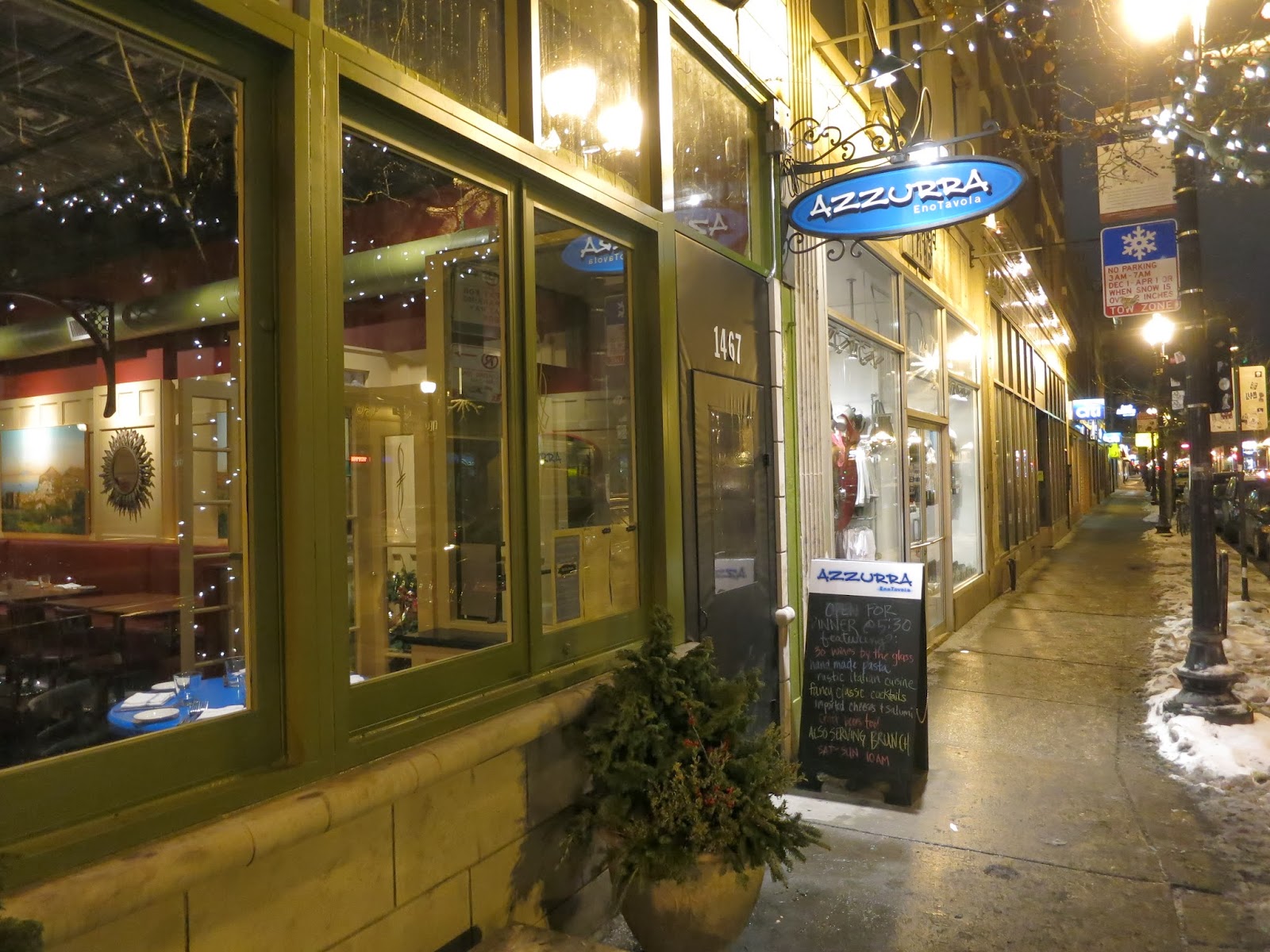 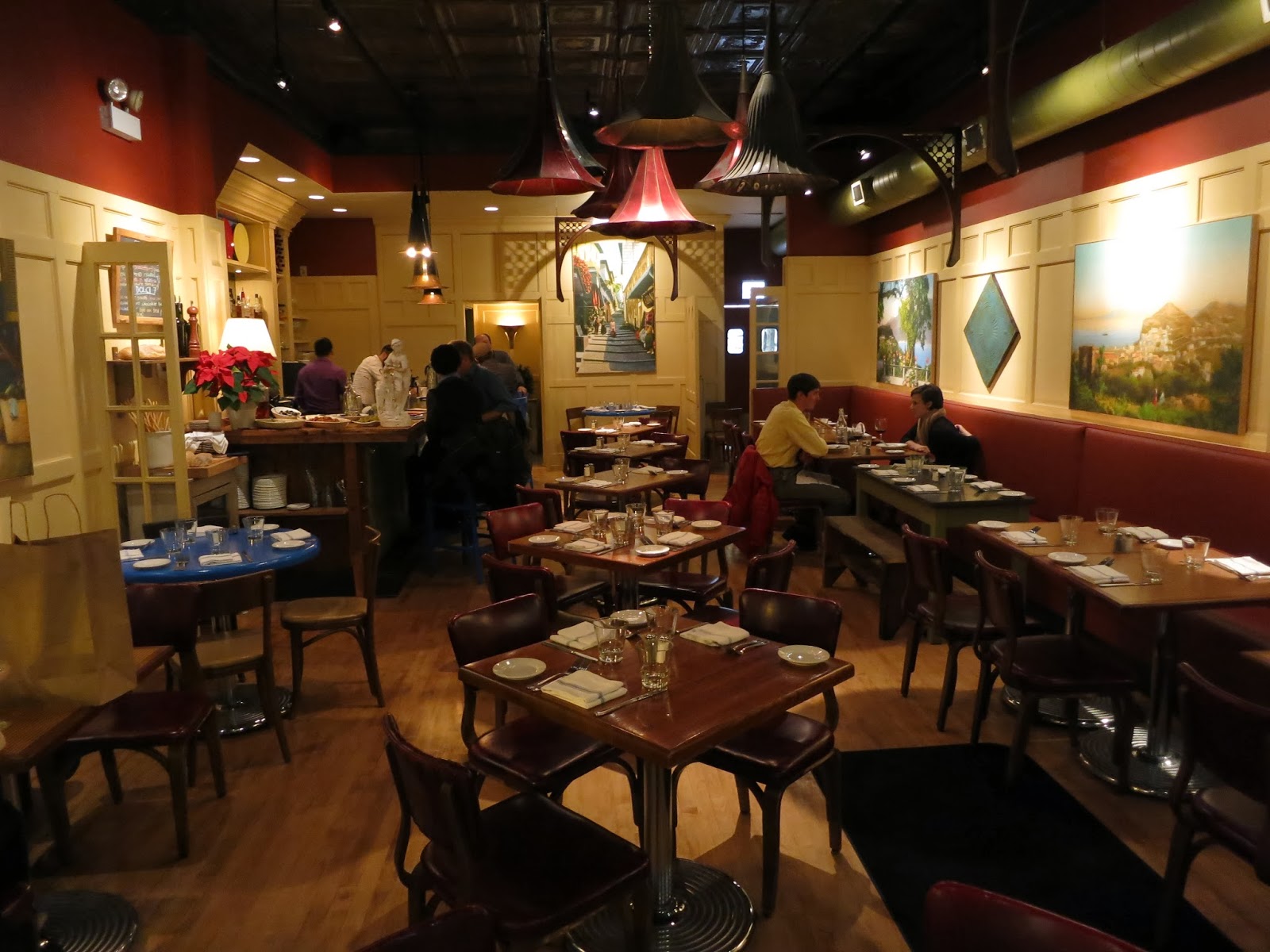 Its a pretty small space inside but that hasn't resulted in any waits on either of my three visits. Service is laid back, they give enough attention to make sure you don't feel you're being overlooked while at the same time you don't feel like someone is bothering you every five minutes with check ups. I don't need to be checked on like a kid below the age 16 flying alone. If you choose to sit at the bar, they got some good cocktails, that's also where the days cicchetti sits. A good way to start your meal here is with a few selections from it. Just make sure to save an early bite or two for my favorite amuse bouche in the city. The cheese straws they give you once you sit down at the table are as addictive as a sunset in Puglia. 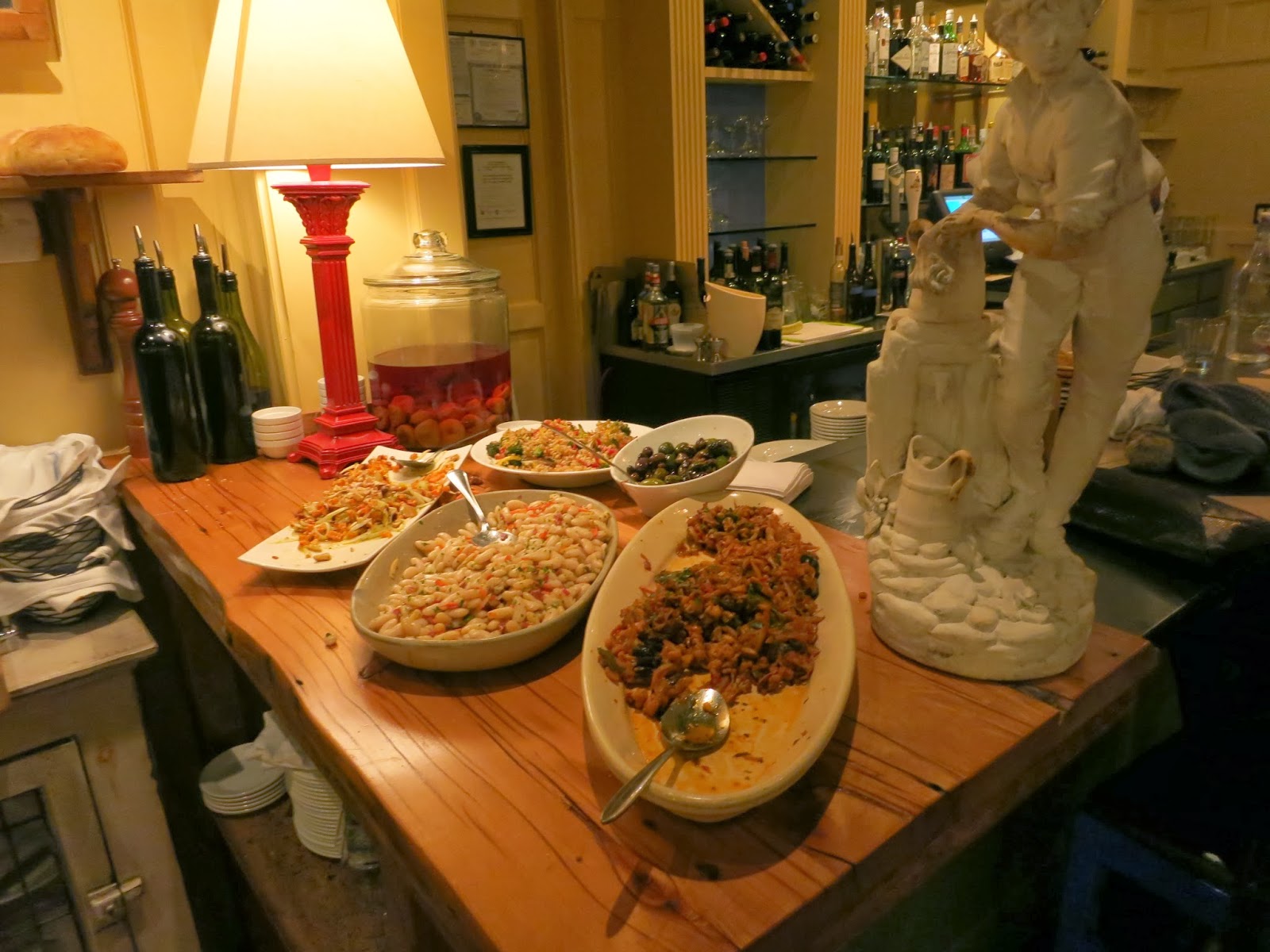 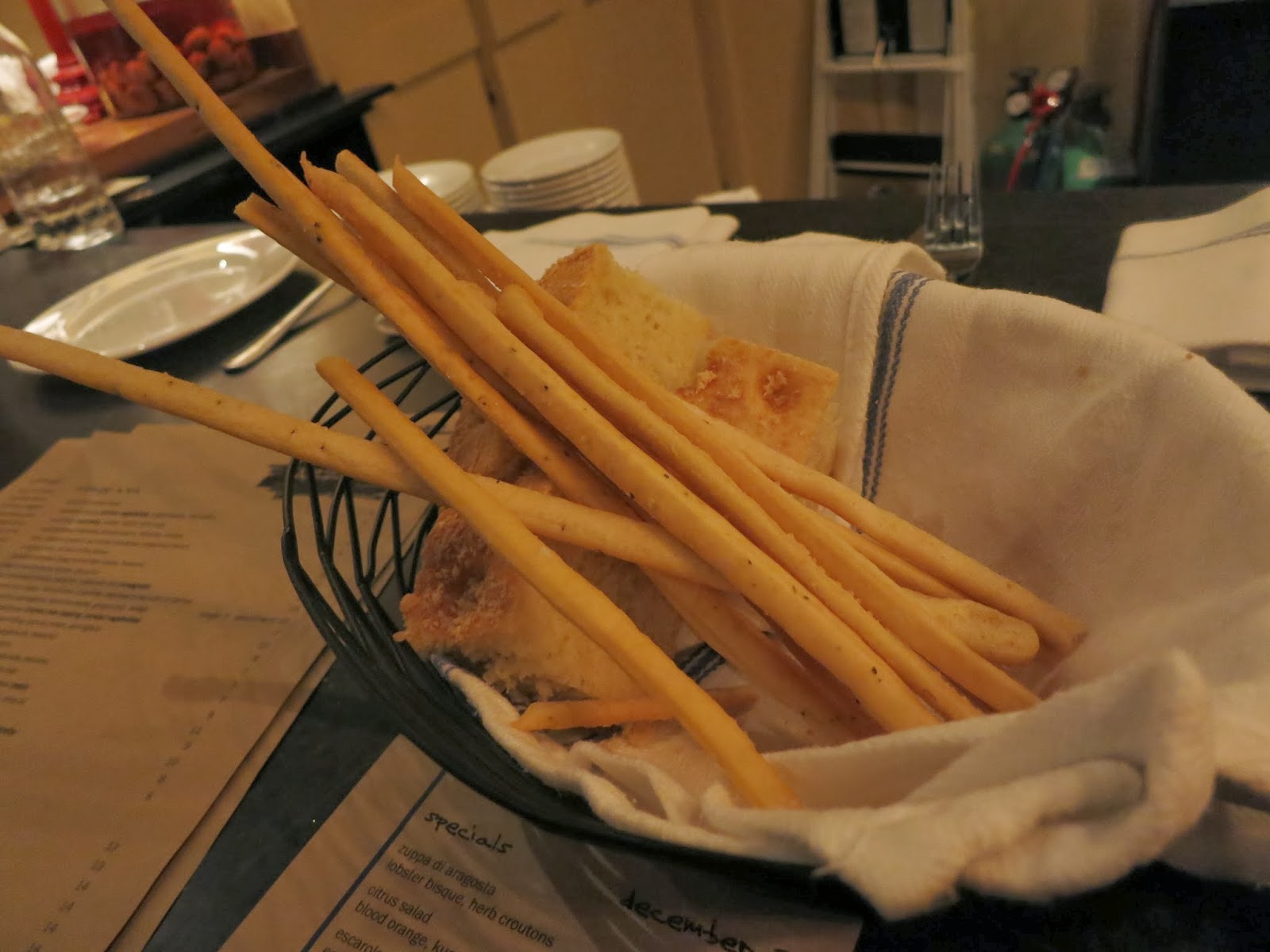 The assaggi e più part of the menu features the aforementioned cicchetti options as well as some hot ones. On one visit we decided to go with a sampler platter and were rewarded with a wonderful plate of fresh options. Whatever the caponata special is, that's a good way to start. Simple and fresh are the keys here. The cannellini beans with pickled vegetables, soppressata and red onion were also worthy of being ordered again. From the hot section I recommend the crispy polenta sticks served over a pepper puree, we ordered more as soon as they were gone. 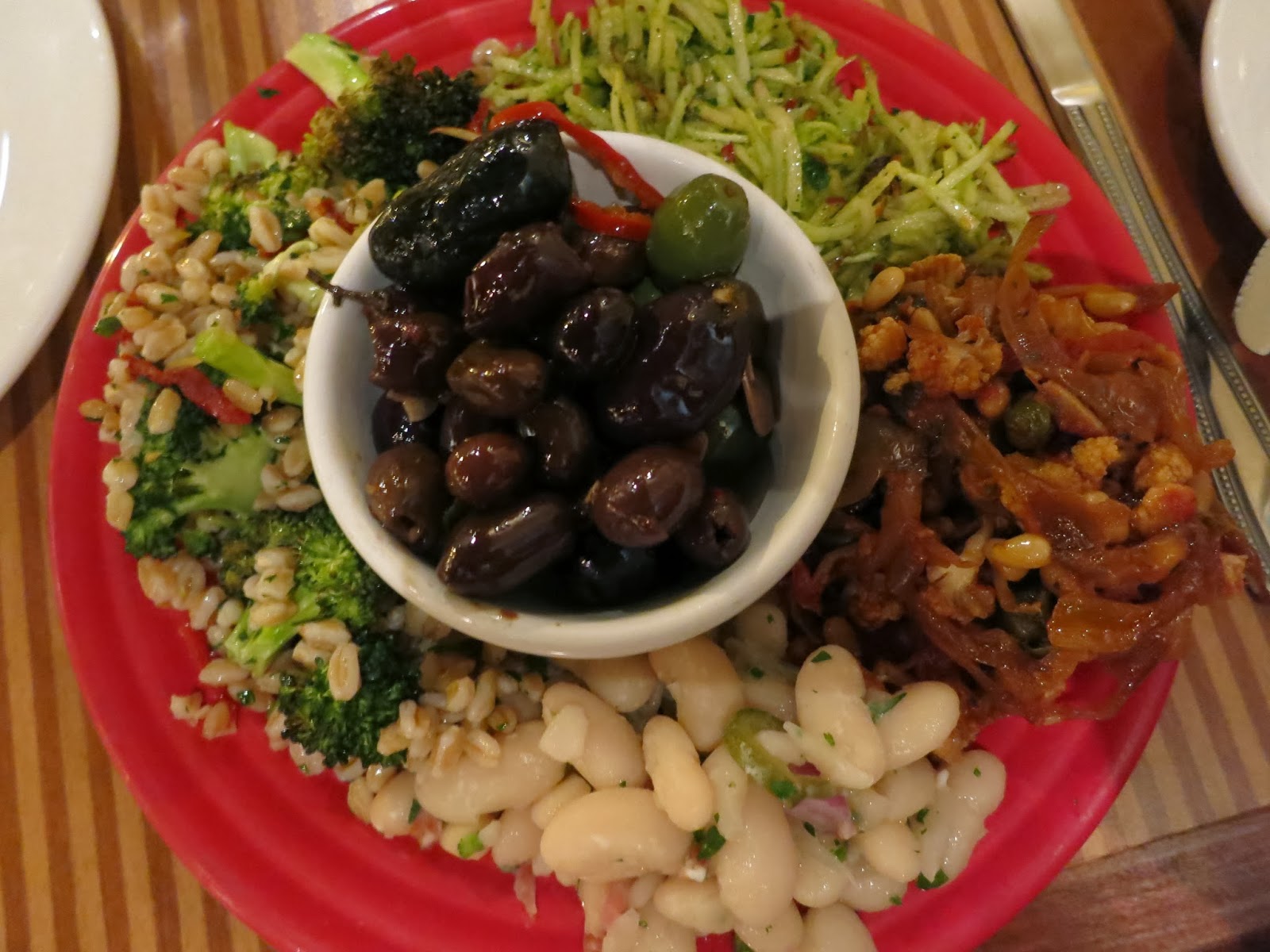 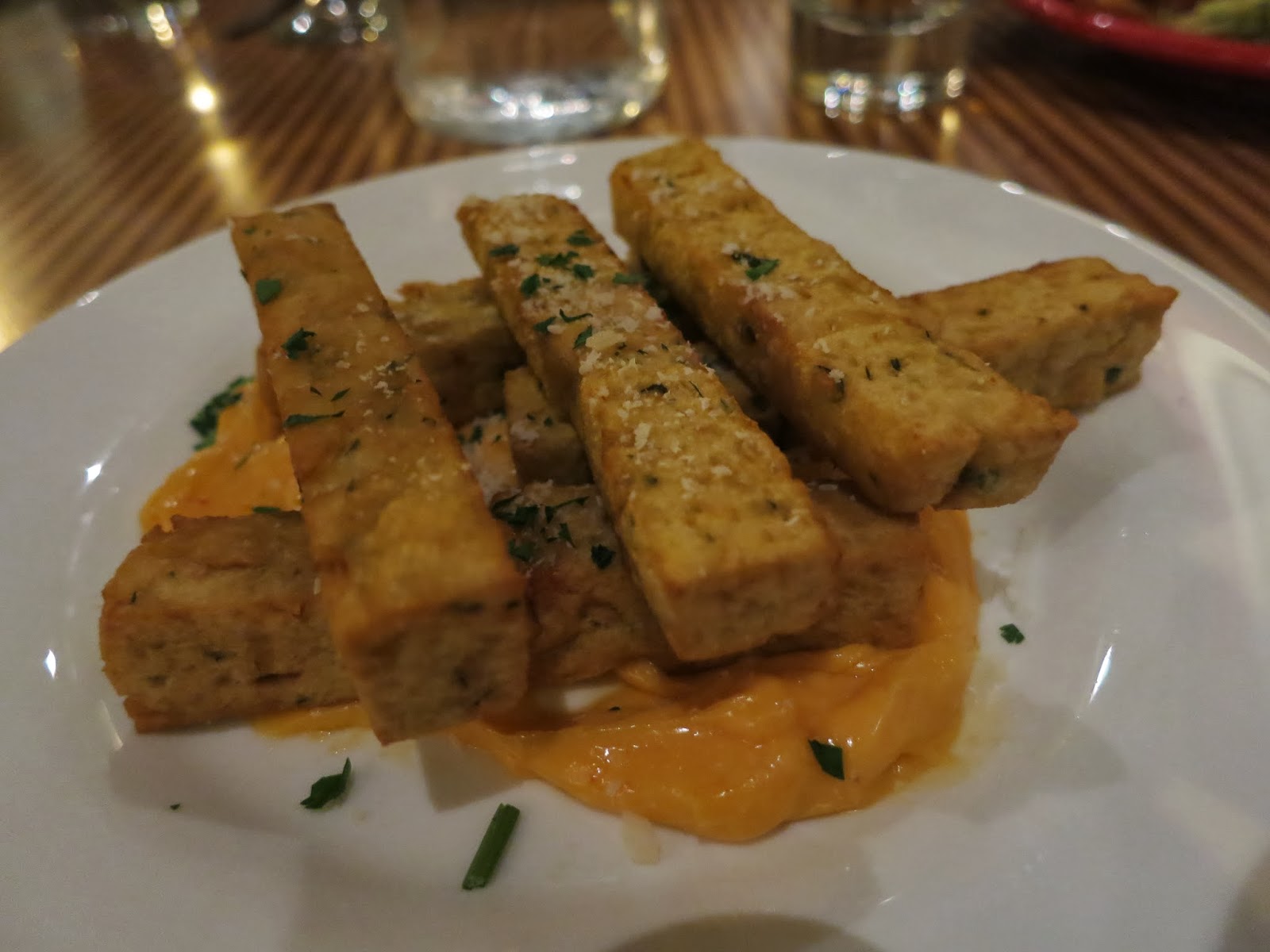 Azzurra makes their pastas in house so of course an offering or two from that part of the menu would have to be tried. The orecchiette with Italian sausage, garlic, rapini and pecorino was very satisfying. The texture was perfect and the sausage had a nice taste to it, something the stuff I ate at Eataly did not. The star of the show though on my first visit was the Whitefish Picata off the specials menu. For whats it's worth I've found every offering I've tried off this part of the menu to be exceptional. That's where I would look first if dining here. The whitefish tasted like it had just been fished out of Lake Superior. The way they cooked it to get the skin crisp was exceptional, especially paired with the little fingerling potatoes underneath it. As I tweeted out after eating, it was the best piece of fish I had ate of late. 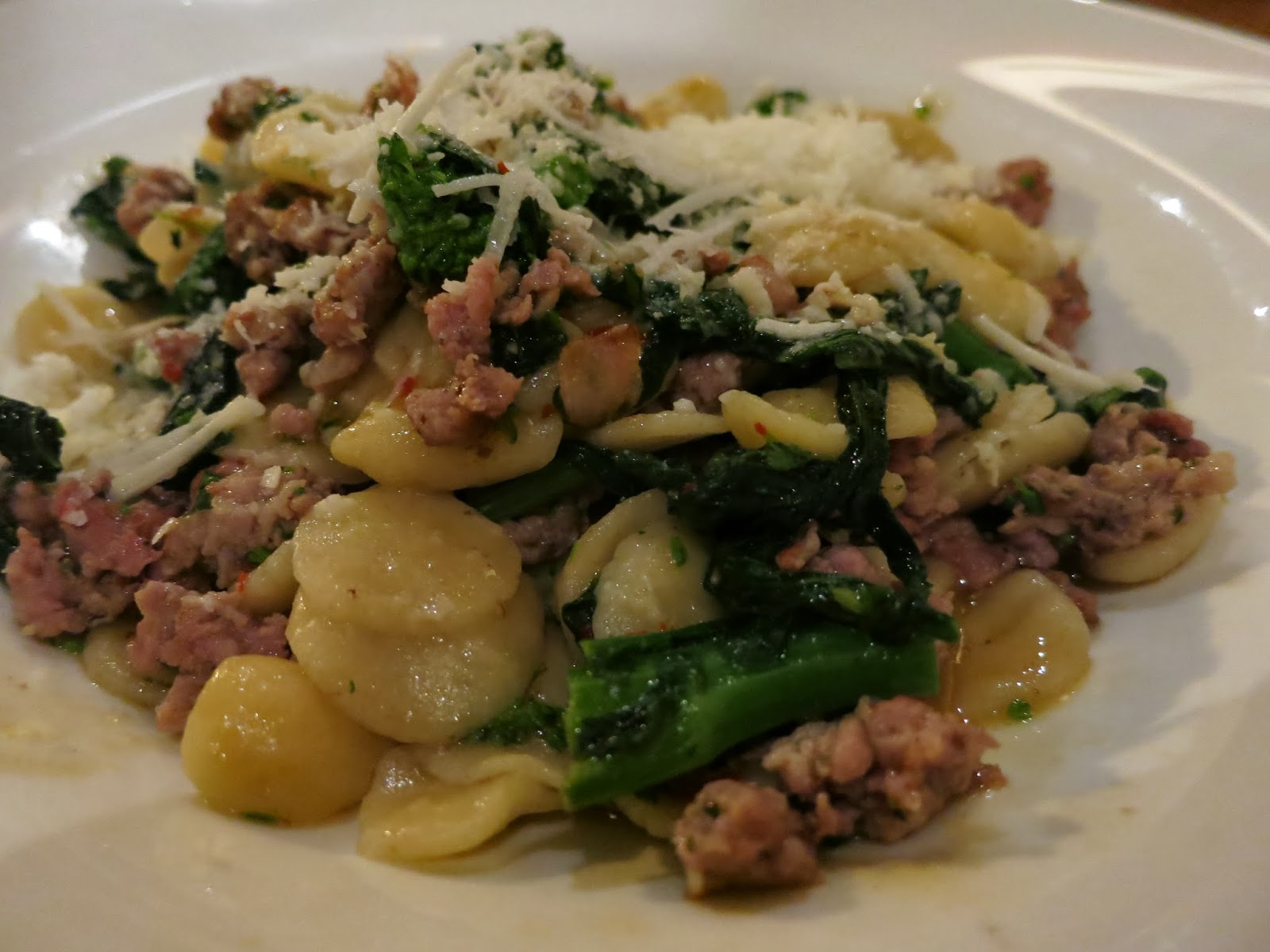 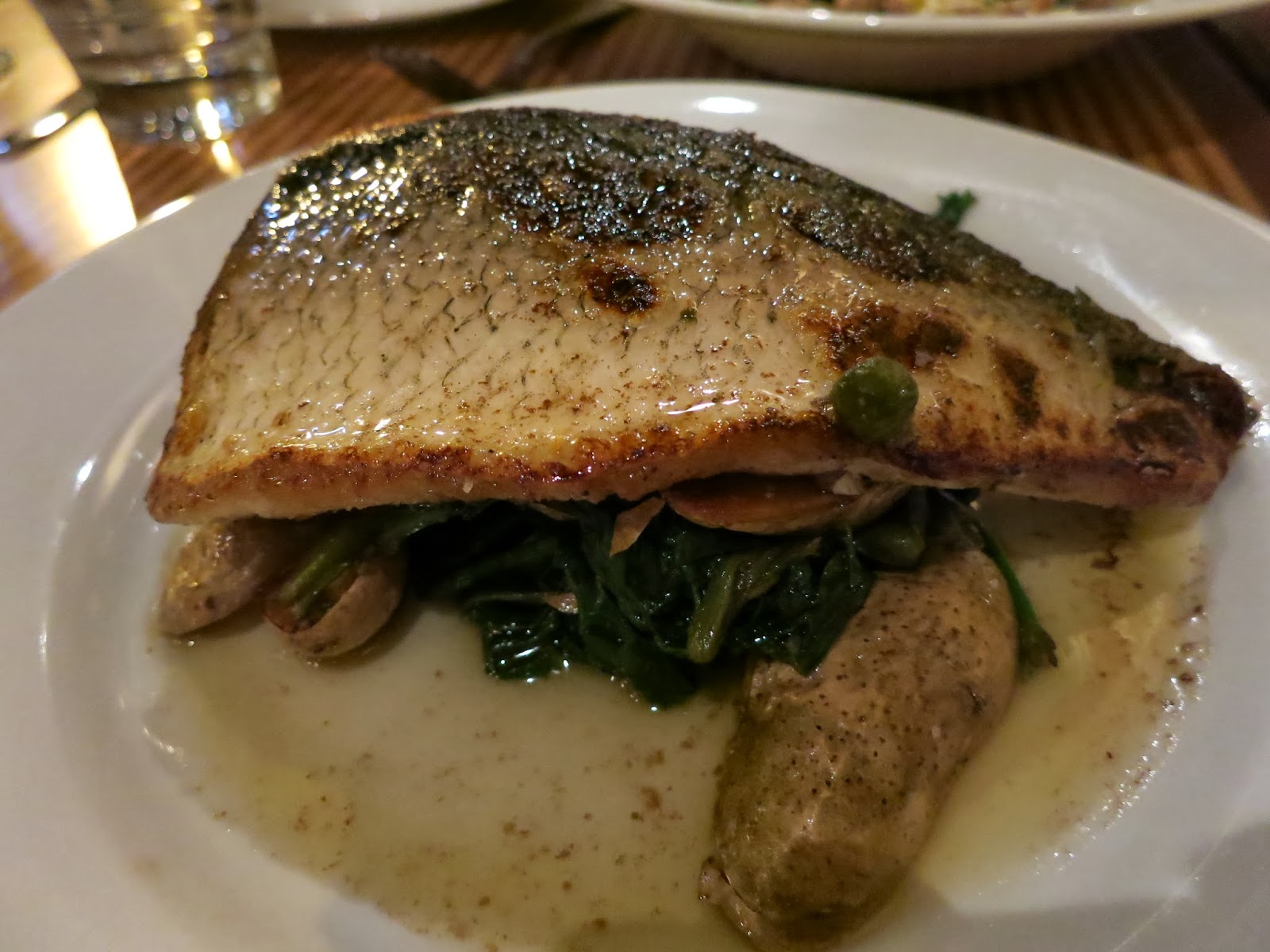 It's not just the simple rustic cuisine of Azzurra that I enjoy. I also sincerely appreciate the fact they're trying to get their neighbors inside. They want people from around the way to try their stuff and one way of doing so has been by handing out $15 brunch gift certificates with every $75 spent. No doubt I was going to be back for dinner after my first visit but who knows if I ever would of stopped in for brunch had I not been gifted the certificate. I'm not big on brunch but was intrigued by what type of dishes they'd have on their menu. The fact I had $15 to sample with got me in. Good thing because the eggs amatriciana just might become my go to eat on early Sunday afternoons from here on in. Eggs poached in a tomato sauce with loads of guanciale, diced red onion, and those same crispy polenta fries make for a great way to start  a weekend day. I inhaled this dish and had to talk myself out of ordering another plate. 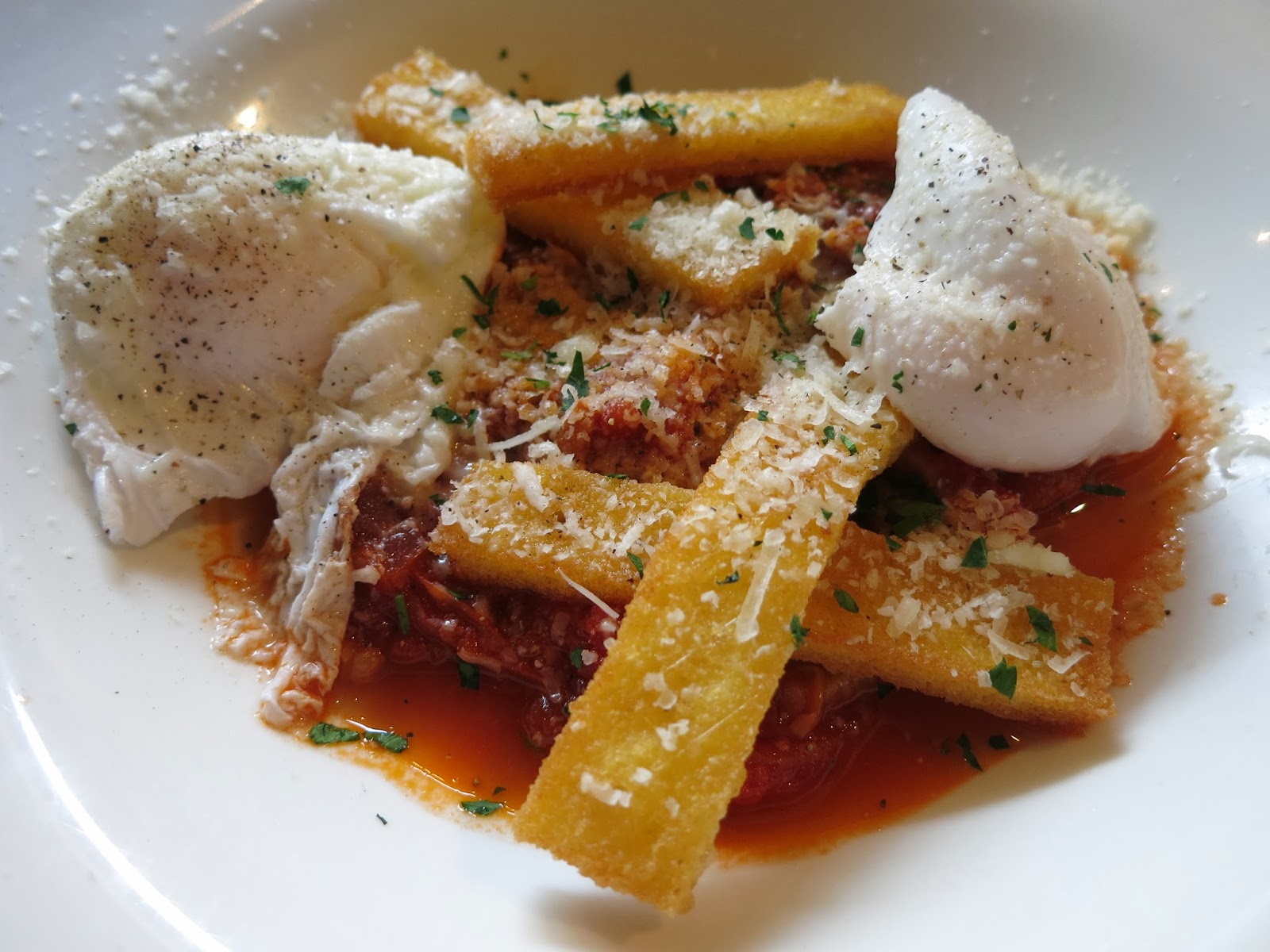 Another nod to the service here as we had a huge misunderstanding over a New Years Eve dinner reservation. A place that will go unnamed decided to call us the afternoon of NYE and make sure we knew that the menu that night was a special set menu. Really? Because their website made no mention of it and they realized we weren't the only ones expecting to be able to order what we wanted that night. No apologies, no nothing, just a "well you shouldn't come tonight" from them had me steaming. Luckily a walk over to Azzurra was within reach. Double lucky that they had a spot for us. I don't know why this place isn't packed every night, it's so much better then some of the other spots frequented by the neighborhood yuppies disguised as hipsters. Well maybe it's not a bad thing that they weren't flooding the place on NYE because we ended up having a wonderful meal. 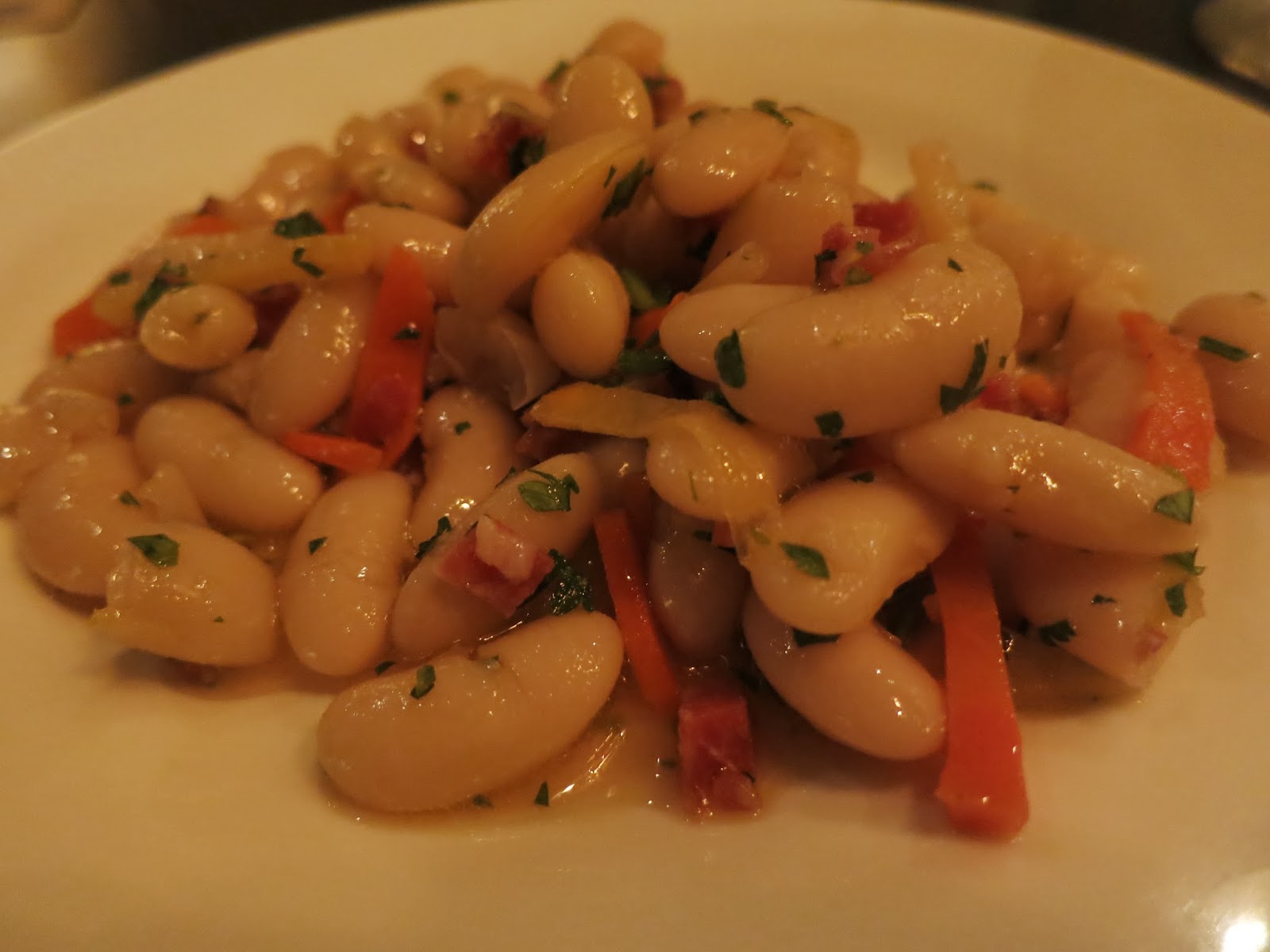 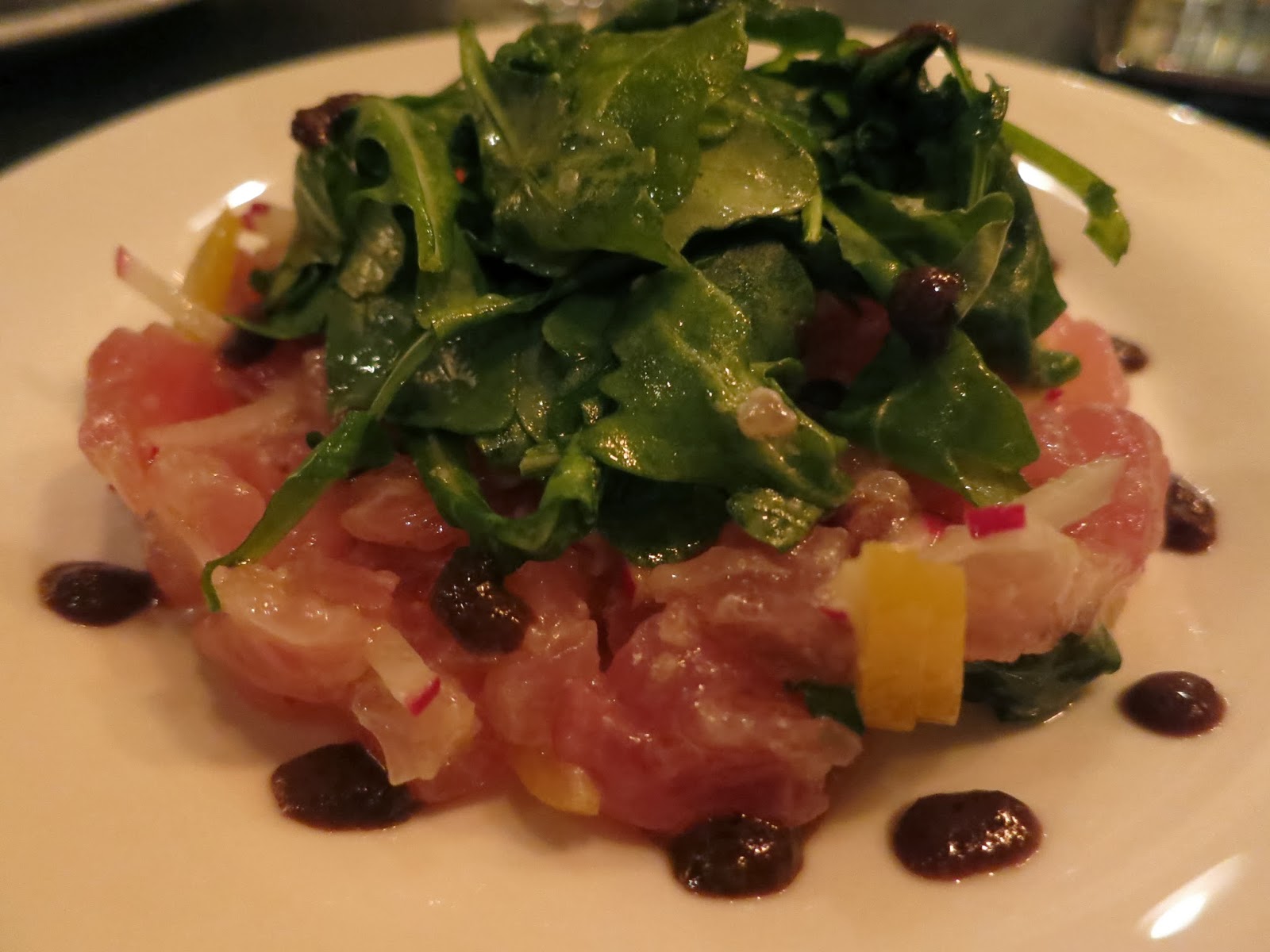 Cannellini Beans and a Tuna Tartar to start

The only real miss I've had of everything I've ate at here is the Italian Wedding Soup. It was just too damn salty. There was a little too much salt in the taste of the tartare as well but it wasn't enough to make it inedible like the soup. It was a nice rendition of one of my favorite dishes, just not one of my favorite examples.  Two of my favorite plates so far were had on this trip so it all evened itself out. The grilled octopus with potatoes, red onion, chili, lemon and olive oil was fantastic. I imagine this to be my meal of choice when I'm off on the Amalfi Coast or somewhere not worrying about anything except when my next drink will be brought to the table. So simple, so good. Same goes for the tagliatelle topped with a prosciutto ragù and parmigiano cheese. Look I understand if you work near Eataly and go there for lunch due to its proximity to your office, but if you're leaving the northside to go there while driving by here, you're just a product of the machine. I've been to the fresh pasta bar there and there's nothing like Azzurra's prosciutto ragù on Eataly's menu. 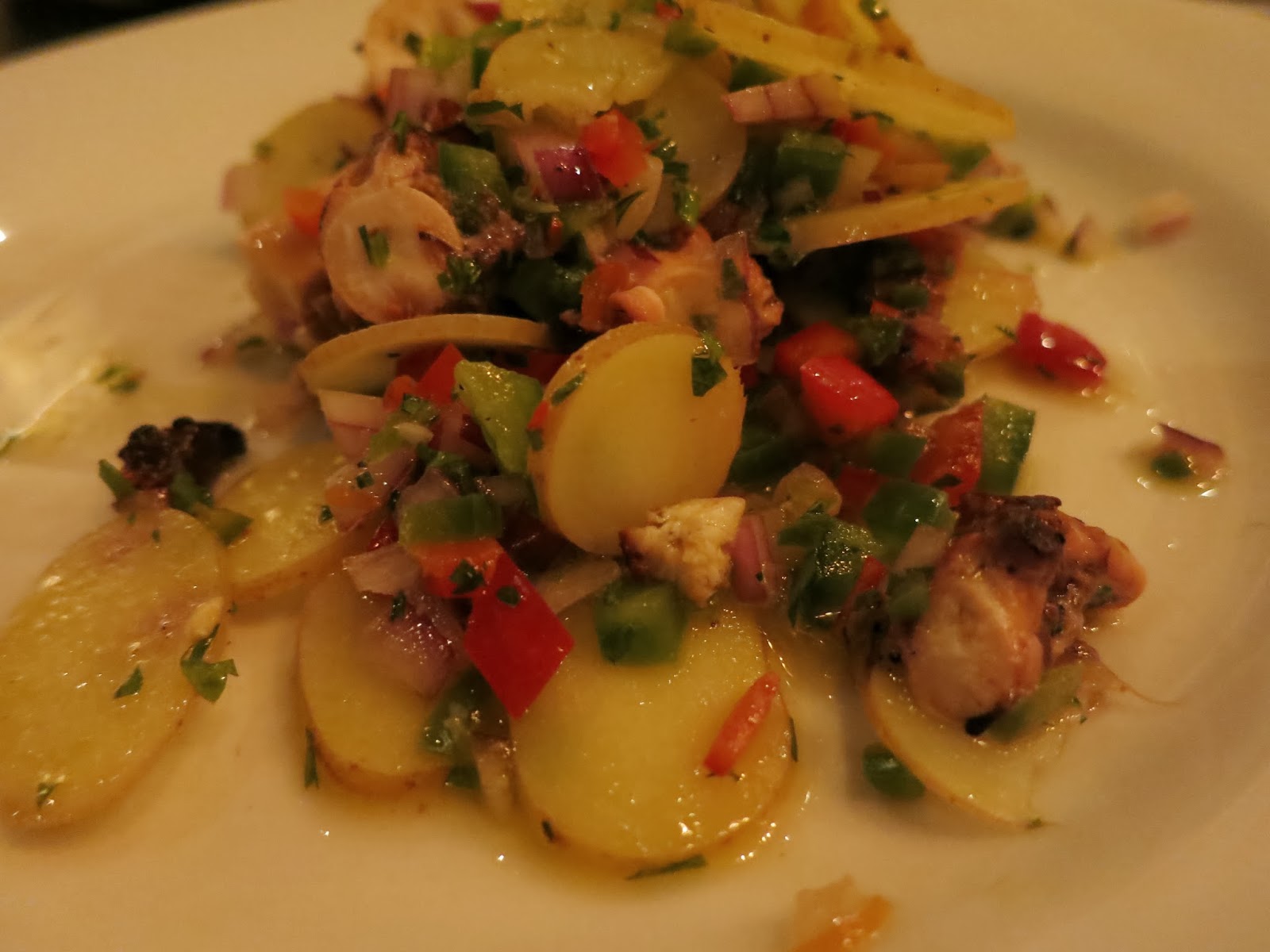 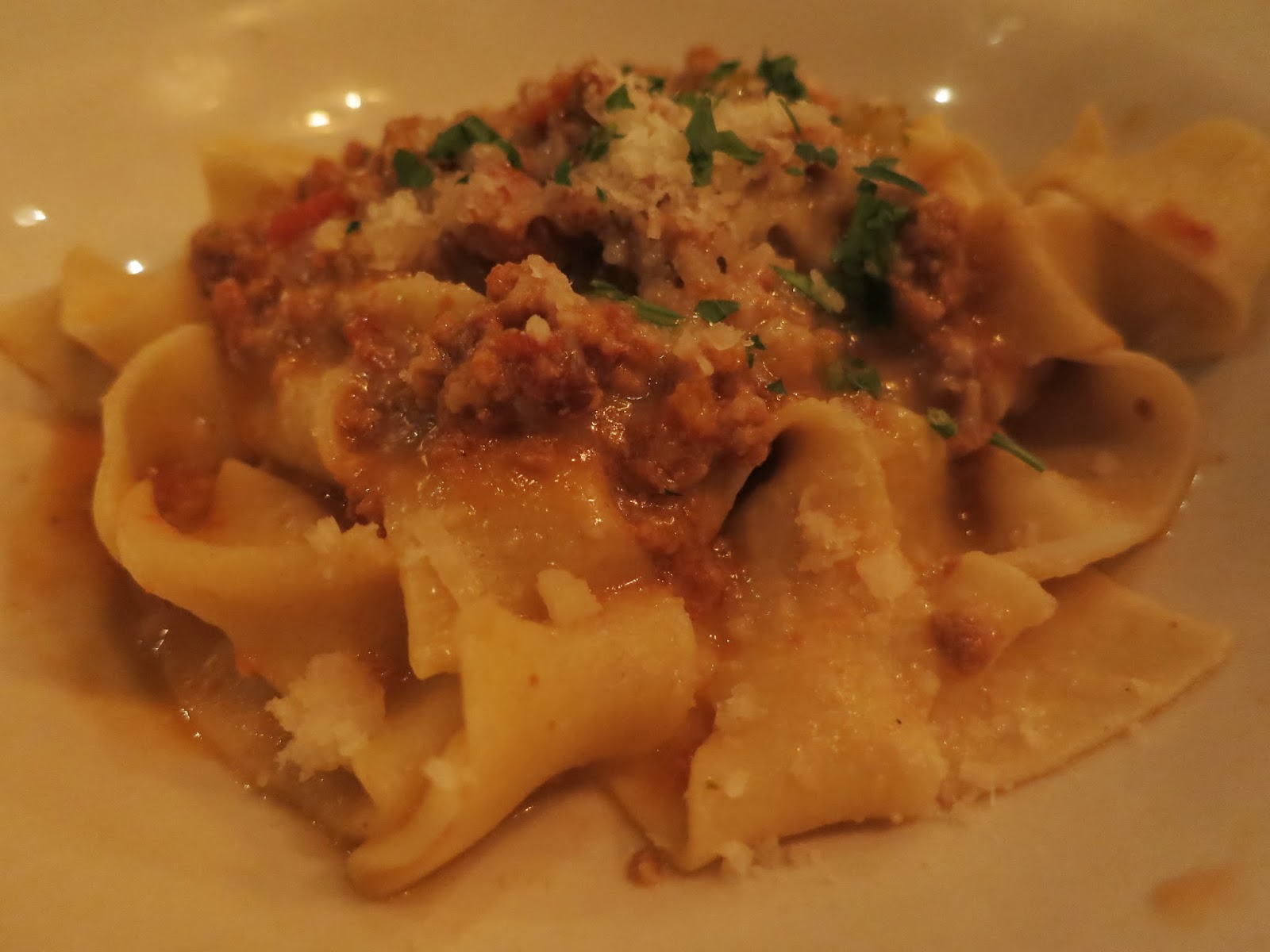 Another aspect I love about this place is the pricing. I've been pleasantly surprised with the bill total each time we've been in. It's as reasonably priced as any worthwhile sit-down place around town. Just take a look at this plate of porchetta below and know we paid something like $15 for it. One of the best dishes made with pig I can remember. I'd like to take this last sentence to welcome Azzurra to my regular dining rotation. 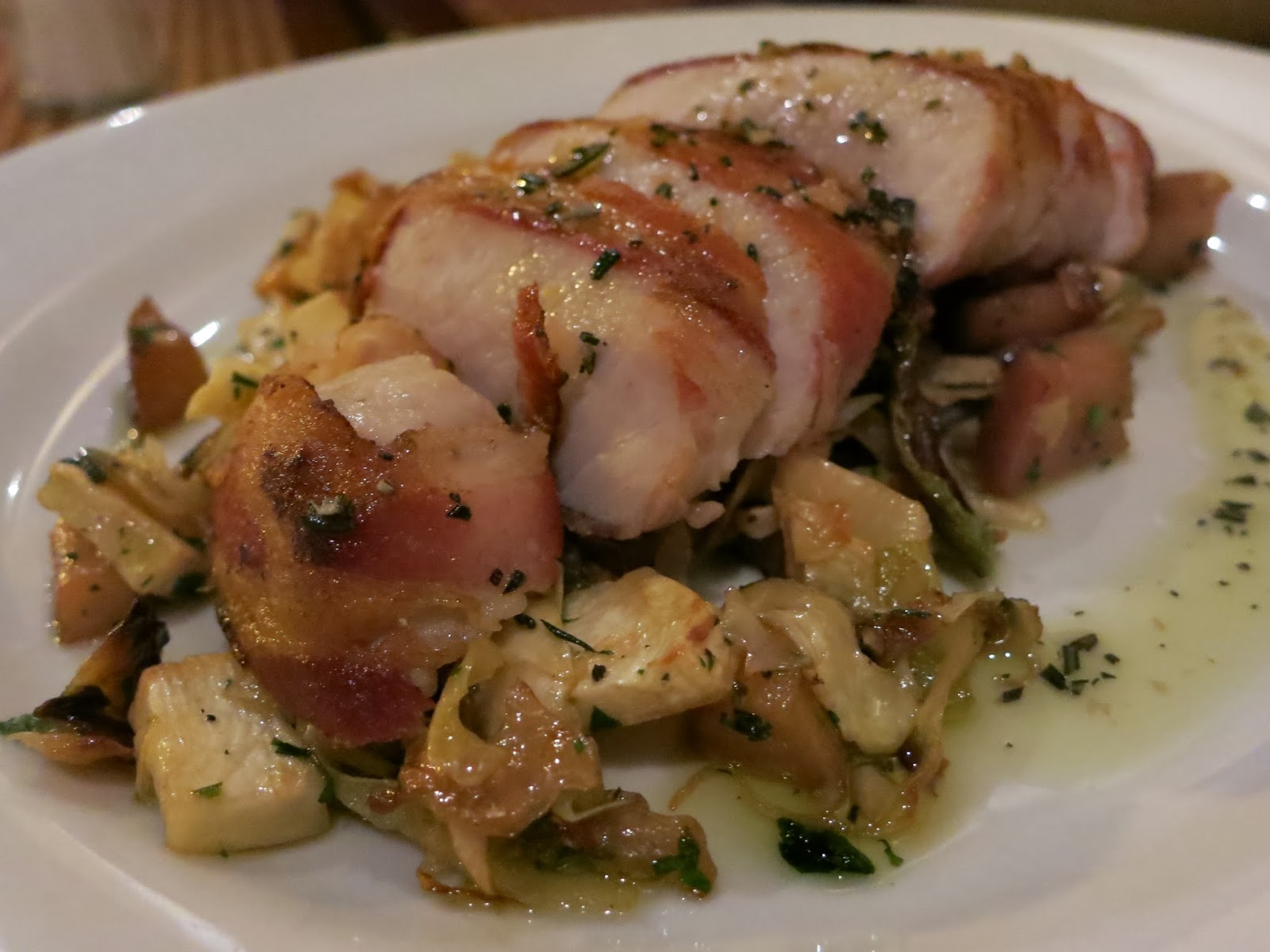