Today we're headed to check out one of the fastest growing food chains here in Chicagoland. Naf Naf Grill specializes in getting a quick Mediterranean fix. Be it in shawarma, falafel or kebob form. It started out as a small mom and pop spot on Ogden avenue in Naperville. It then quickly became a hot spot that was featured in many food related publications. Two businessmen were so impressed they asked to form a partnership with the couple who owned it and here we are today with eight locations through the Chicagoland area with more planned as each quarter passes. If you have Naf Naf as a lunch option near where you work, you're probably not complaining. 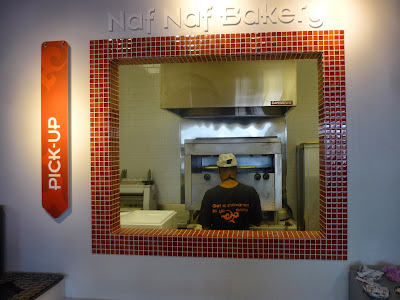 Naf Naf has developed a cult-like following and many swear by their bread...baked fresh on site at some locations

They have a well rounded menu with many usual suspects but its the chicken shawarma that I order each and every visit. Which isnt abundant since the only one I've ever tried is the Niles location but I make it a point to stop in if passing by the Touhy avenue exit on 90/94. They display a huge spit for the meat that comes pretty tamely seasoned but is only a part of the entire sandwich. I'm in the middle on the aforementioned pita bread. Its extra soft and puffy as they make it fresh at this location. What really makes this sandwich for me though is their hot sauce which is a cilantro heavy concoction with real spice to it. Also the pickles, I always order extra as they make for the perfect condiment to top the entire sandwich off. Their house cut fries are more like chips, some love them. I pass as the sandwich itself is a nice portion size for someone looking for a quick lunch under $10 that isnt from Ronald, Wendy etc...You can do much worse when you only have 40 minutes. 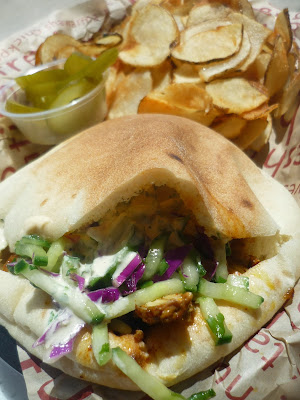 Naf-Naf Grill
Locations in Chicagoland
Posted by KingT at 11:11 AM