So I'd had a taste for fried rice of late and decided to try this place called Hing Wang located a few feet from the red line on Wilson. A stretch that's one of the cites livelier blocks. As you can see from their awning in the picture below they claim to have "the best fried rice in town" The seemed to be pretty popular with students from Truman College across the street as well as cabbies and the odd folks that inhabit the area. 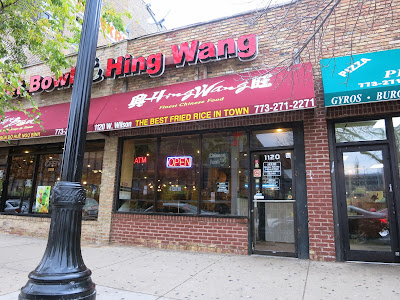 When you walk inside you have to step up to the counter where the open kitchen sits and place your order. If dining in you're given a number and you pick up your food when it's called. They do alot of takeout but there were a few folks dining in when I stopped by and they all had fried rice. I got an order of shrimp and was asked if I wanted it "spicy" and said yes. The shrimp were pretty nice sized compared to most other spots. Obviously they weren't from the Gulf or anything but it's nice that they aren't the miniscule ones you normally find in fried rice. I also liked the color, the browner the better. I didn't notice any egg or much of anything else besides extra bean sprouts and some chopped green onions mixed in. What they didn't skimp on was the portion and spice. Best fried rice? Not in my book but I'm sure it's something I'd be eating if I were taking college classes across the street. 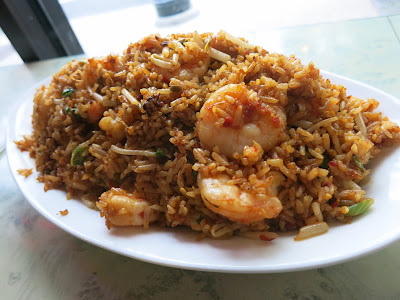 This blog resolved all my queries I had in my mind. Really helpful and supportive subject matter written in all the points. Hard to find such kind of blogs as descriptive and accountable to your doubts. Noodle in Minneapolis