So anyone hear about that new fried chicken chicken place over on Elston in Avondale? Haha. Just in case you haven't, its been getting alot of press and discussion amongst Chicago's food people the last couple months. There was one night when they were having a preview and my twitter timeline was taken over as if there was a major happening in Chicago news or sports or something to the like. For a couple hours almost every five tweets included a mention of this place as they had seemingly invited everyone who was in Chicago food in one way or the other. I've never met the owners so nothing I ate was free. Well actually it was, her choice to try it when we did so she paid. 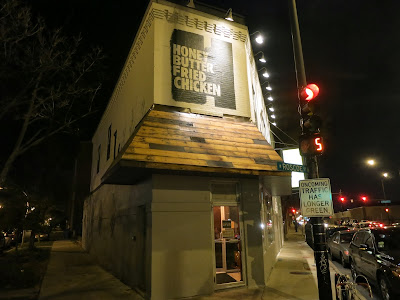 Much talked about Fried Chicken spot in the Avondale neighborhood

Because of all the talk and also the fact that the couple behind this place had served their honey butter fried chicken at pop up's there can be a line to get inside. Not on my visit which was on a Thursday around 7:00. The place remained half empty until about 8p when a line inside started forming to order. I like the setup they got going on. You wait in line, until its time to order. Once that's been placed you take a table. There's a bar with mixed drinks in back, and they bring your food out to you. Obviously the namesake dish is popular and would be ordered but I also wanted to try the special (Buffalo Tenders with Garlic Grits) and some of the sides which a few had raved about. So we went four piece chicken, the entree special with side orders of Schmaltz Mashed Potatoes, Chicken and Sausage Gumbo as well s a Creamed Corn with Thai spices on top. 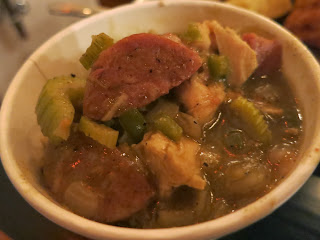 Starting off with the sides I really liked the creamed corn as well as the chicken fat laced mashed potatoes with gravy but thought the gumbo was way too thyme heavy. What I really wanted to try and have been waiting to is their chicken pot pie which is on special some nights. It would be nice if these guys got on twitter to let folks know what the specials are rather than have us call but that's just a minor complaint. They didn't have the pot pie but were offering a chicken and grits dish made with real tenders tossed in their housemade buffalo sauce served atop some garlic grits with little bits of fried chicken crisps in it. It was rich and it was fantastic. 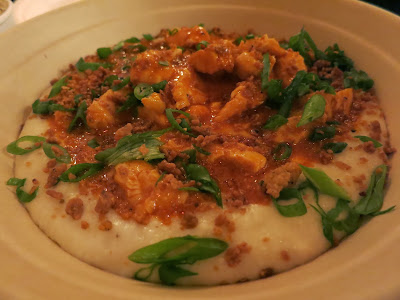 Something interesting happened between their grand opening and now. Honey Butter went boneless. Something I'm not a fan of. But it is important to note they aren't just getting pieces of boneless chicken from the Restaurant Depot and deep frying them. They do all the butchering in house with quality birds from Amish Indiana and use said bones for pumping flavor into the sides, soups and other specials. The honey butter name comes from the little cup of honey butter included with each order. You use it to spread onto the fried bird. So how is it? Not bad! They keep the bone intact for the legs so of course I grabbed that which was pretty damn good. Skin slipped off but the meat was tender and came right off the bone. I thought it was seasoned well and the butter didn't hurt that fact. It may be a little more money than folks are used to paying but its not going to break the bank. Would I wait? Probably not but I'd have no problem going back when it's not busy and seeing what other specials they come up with while enjoying a piece or two. 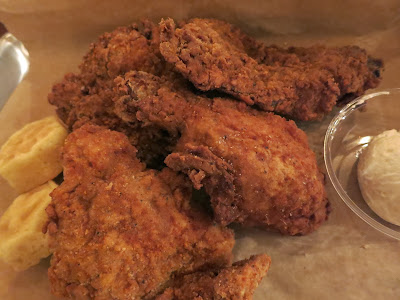 Professional trading signals delivered to your mobile phone every day.

Do you need free Google+ Circles?
Did you know you can get them ON AUTO-PILOT & ABSOLUTELY FREE by registering on Like 4 Like?