With the Fall season in full swing I thought it'd be nice to stay on the road here at S'C'&C and head back to the South Bend and Amish areas of Indiana. The drive around here is one of my favorites in the Fall, the crisp air and the smell from the burning leaves and all the pretty winding roads along the river leading you into cute little mom and pop shop towns. You can check out this trip from a few years back for some other suggestions on top of those that we're going to visit here today. 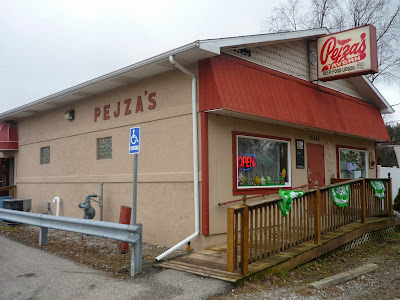 Locals favorite in South Bend, IN

Pejza's Lydick Tavern was put onto the radar by Grubseeker (On Hiatus). He scouted it out for us on this trip which I joined him and another friend in exploring some old long gone breweries and seeking out the local mom and pop stops we love. Nice find by him here, this is a place I'll get back to whenever I'm in South Bend. This Polish bar on the outskirts of town was a real nice locals type tavern. Both the people and the interior, with the food being excellent. 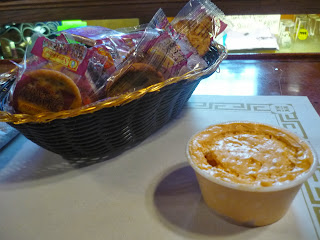 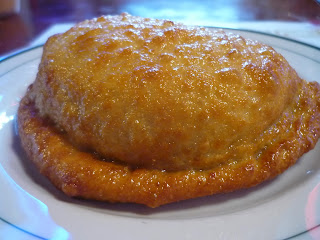 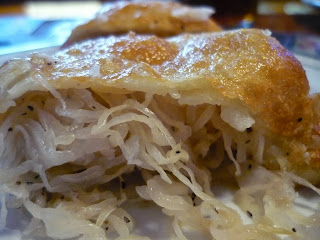 Homemade cheddar spread to start. This seems to be a popular thing in Northern Indiana as I've had it at a handful of places and buy it at old time butcher shops in the area. Pejza's offered an excellent offering that paired great with beer. Some of it served with those old school complimentary cracker baskets for $3 was a fantastic bar snack. Then there's the pierogies, possibly the best I've ever had. An old lady comes into make them a couple times a week. They're about 50% bigger than most I've ate and deep fried as opposed to pan. We all thought the sauerkraut one was superior to the cheese, damn tasty if I may say. It was around St. Patty's Day on our visit and so they were celebrating with a corned beef sandwich on special. I didn't think my best one of the season would come from a Polish bar but that it did. 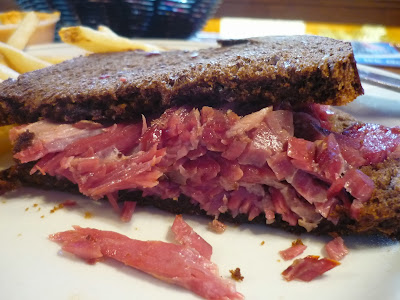 After a few drinks and some eats it was off to Amish Indiana which is only a short drive away. But not before a quick stop at a couple old buildings that used to house Breweries, one of which is making a comeback this year. Grubseeker has an entire series going on over at LTHforum which explores the Midwest's "Victim's, Survivors, and Ghosts" from Prohibitions days. It was cool getting to check out the old Drewrys Brewery building which has plans of coming back. 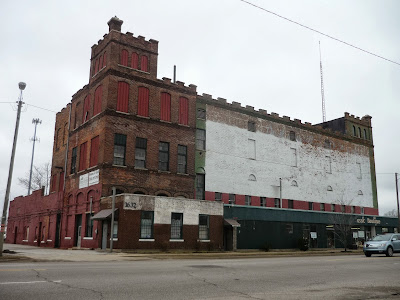 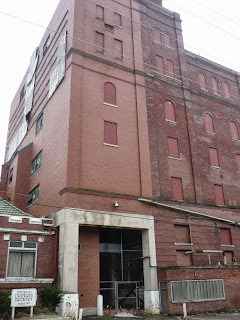 We got off to a late start this trip and lost an hour on the way into Indiana so we didnt get into Amish country until 4 or 5 o'clock and luck wasnt on our side as there seemed to be some big wedding in the Yoder family because the entire town was shutting down early. We did get a chance to run into Guggisberg Cheese House, home of the original Baby Swiss. It made for an excellent patty melt. Luck was on my side with the fact they sold the Yoder's fried pies here too because those are one of my favorite treats, specifically the cherry ones. 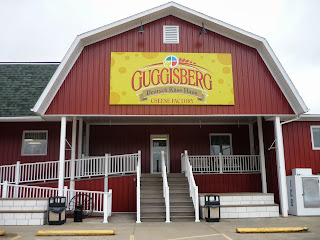 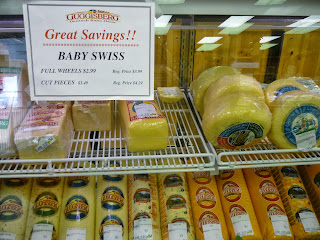 Continuing on we rolled into the pretty little town of Goshen, Indiana. Located on the Amish country trail this town has a fun little Main street. A day trip to the area is best made early on a Saturday. This will give you the most options of things to do. We spied a place called universal Tamal. Me being the fiend for Mexican food that I am, it was an obvious choice for a snack. 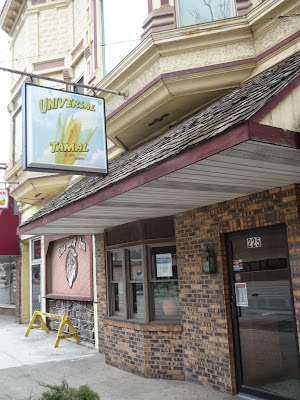 Family Tamaleria in Goshen, IN

As is the case with most Mexican owned mom and pop shops it was all in the family here on our visit. Daughter took the order, dad made the campechana quesadilla while mom got the tamale plate ready. The 'dilla was good but should of been served without the salad in the middle. The tamales were very good. We got a variety and I remember liking most especially the strawberry one which we ate last and worked much better than I was expecting it to be. The perfect dessert for me. 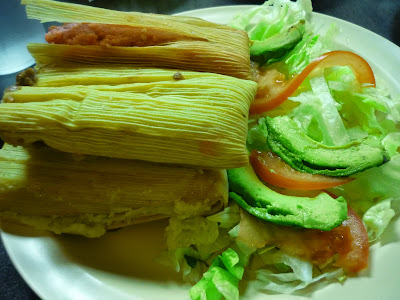 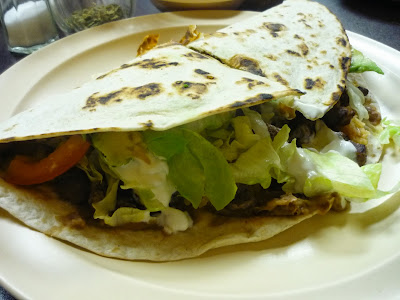 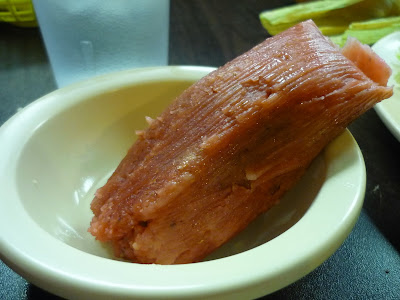 Next stop on our tour took us over to Venturi Pizza in Goshen. Long on my radar this place is mentioned quite a bit when best pizza around the region comes up. Housed in a beautiful old brick building it's one of only so many certified Napoletana pizza restaurants in the Midwest. What's that mean you ask? Well I don't exactly know, some Italian federation grants you certified when you use the proper ingredients. But it's wood fired, you can see the pile sitting in front as you enter and it's really good. 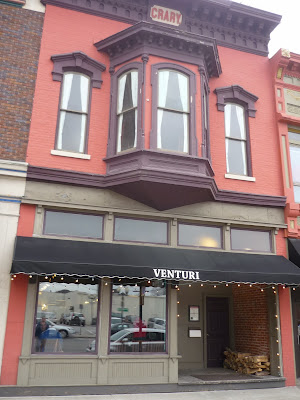 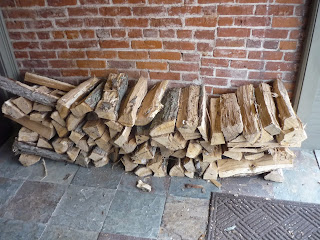 The guy that started this place could of done Chicago style pizza or something like that but he didn't want to do what there was already a few options of. Inspired by some time on a farm in New Jersey where he made Neapolitan style pizza, he decided to bring it to Goshen where he moved to work with his wife. The dough is made from double zero flour, whats that? Not exactly sure, haha. But again, these guys are good with the wood. This style is cooked quick in a wood fired oven on display and comes topped with options like pancetta, prosciutto, sopressata and of course the traditional Margherita. I really liked that pie. Something I'll seek out again when I'm in the area. 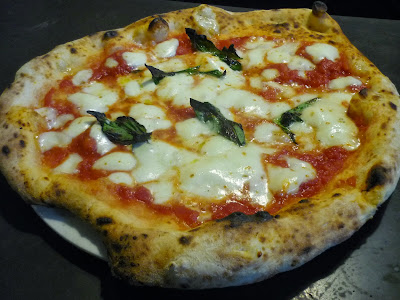 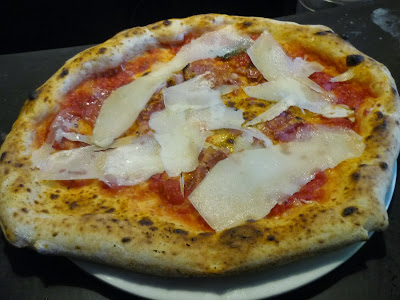 Pizza Margherita and a Pepperoni Pizza

Last stop on our trip was to a place long on my list. Heinnies Backbarn in Elkhart, Indiana; The RV capitol of the world and birthplace of Shawn Kemp. The town of Elkhart has fallen on some harder times like many other of the Midwest places that thrived on manufacturing.  I've long wanted to try Heinnies because they were mentioned in George Motz's 'Hamburger America' the only place in Indiana to be. 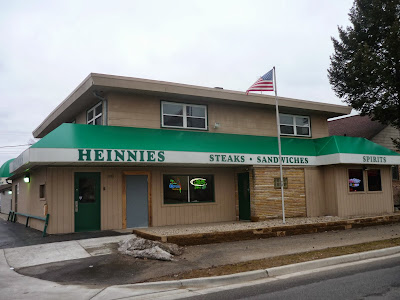 Locals favorite in Elkhart, IN

The atmosphere inside the place was spot on for a Saturday evening. We were able to squeak out the only three seats in the place by taking a spot at the bar which is my preferred choice anyway. The smells were really good too. That was mostly coming from the skillet plates of steak with grilled onions that most folks in there seemed to be ordering. But because of it's inclusion in 'Hamburger America' we were there to try the burger and decided to split a tenderloin sandwich. As you may or may not know, Indiana and Iowa both they claim to the 'loin. However based off my experience Iowa beats the pants off Indiana when it comes to them. Although they pounded a fresh one out there it was just ok. Unfortunately it was better than the burger.  It tasted nothing like what I read it was. No taste of fresh meat from the butcher down the street, maybe because it was cooked to a crisp. Oh well, the book was written a while ago, shame all places cant stay the same but that's just how it goes. Or maybe I caught them on an off day. Who knows? 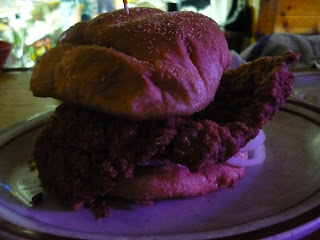 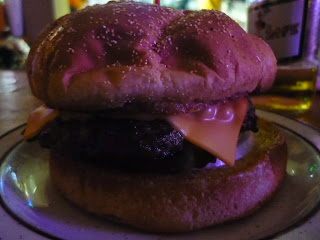