If you've ever been cruising down North avenue thru the Austin neighborhood at night you've probably smelled smoke. No smart ass, not that type. It's almost always blowing from the chimney at Ben's Barbecue at the corner of North and Mason. I first stopped in a few years ago because the smell of the smoke that night was too much to resist. For some reason I went a year in between visits but have stopped in more than a handful of times the past six months. It acted as my go-to spot for 'cue this past summer. They're a great example of the Chicago style of BBQ that many, including residents, are unfamiliar with. Family run spot with big aquarium smokers behind the ballistic glass with a menu of staples like rip tips and fried chicken. 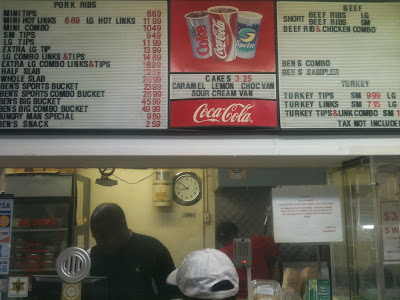 Waiting in line at Ben's Barbecue

The reason I've held out on posting about Ben's is because when it comes to BBQ I like to make sure the place I'm going over has had a few fair visits. What's that mean? barbecue is a tricky treat. Quality can vary from the same space depending on a number of things. Time of day, actual day and who's behind the glass are just a few examples. Its not fair to go to a BBQ place once and say it sucked or for that matter, label them King. Its all about consistency and I feel Ben's has that. But I've also found that they're at their best when it's after 10p. The customer rush comes around then and lasts a couple hours so they plan to have fresh smoked pig ready when it rolls around. I've had more better than average tips than I have had average or below. The smoke is just about perfect and while the chop job can vary, it's usually done right. I always get sauce on the side with BBQ and advise you to do the same. I like Ben's version but only in small dips. I'd say this is your best bet on the west side. So in many cases its the closest good stuff to the north side. All that said, it could hang anywhere, they're first team in my book of smoke. 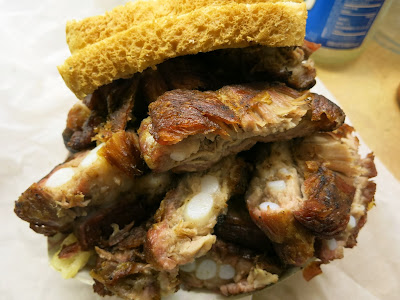