Eating like a local:
Regional food specialties
-Blazin' along on Dallas' Taco Trail

We're staying on the road in honor of National Taco Day which just so happens to be October 4th, today. Twitter has been abuzz this week with the talk of tacos due to it. I know, I know, another fabricated food holiday...but a fun one! I don't know if the Dallas, Texas metropolis can hold a bottle of salsa to the top tacos of NYC, muhahaha, but damn is it a great taco town! I joined @tacotrail, in spirit, as our schedules just couldn't come together and hit up some of the spots he recommends on his sensational website, which you can find me writing stuff about tacos on soon. I only had a couple hours each day with my GF being in control of her vehicle but man did I love what I got to try. It obviously helped tremendously that's he's blazed the trail for hometown residents and visitors like me to know exactly where to go to enjoy some top notch tacos from one of the four main bastions in America for them. From DFW down to Austin thru San Antonio and East to Houston or West into El Paso, Texas knows tacos.
_____________________________________________ 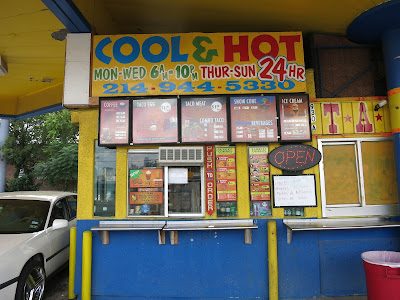 Just off of Interstate 35 at Eighth Street.

I had to pick my places precisely on this trip. So I plugged some address' of some of José's top taco rec's into Google maps and made out a list of ones not far from each other. We don't have many gas station tacos in Chicago but I saw quite a few in Dallas. Cool & Hot came recommended and I loved the fact it was not only in a gas-station but also doubled as a Sno-Coneria'. Sno-Cones and Tacos at a gas station? Hell yeah, why not? At this point I'm used to bringing people to places they never heard of in their own hometowns. 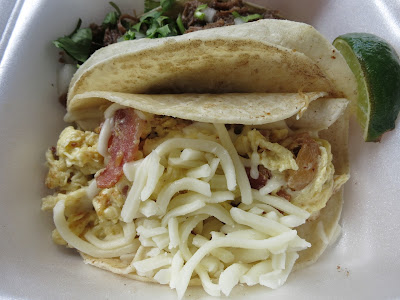 We were headed into Austin after a couple days in Dallas but I didn't want to wait to have my first breakfast taco while in Texas so I got a bacon, egg and cheese taco and also a beef barbacoa which came praised. The breakfast taco was pretty good for a filler but the beef barbacoa was where it's at. Succulent, smooth beef with a rich flavor pairs so perfectly with onions and cilantro between a corn tortilla and this was a great example of why. If I'm a resident this taco is in my rotation. 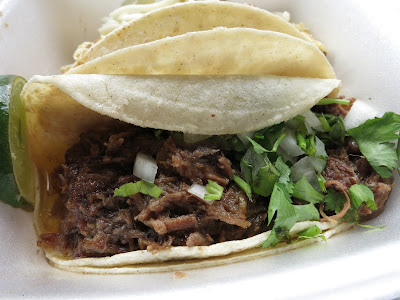 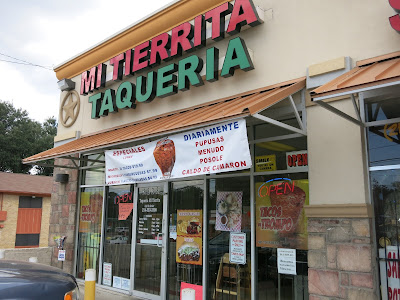 Next stop is to a place located in a strip mall in North Texas. For those of us not familiar with the DFW area, this isnt a neighborhood many tourists make it too. But it is a neighborhood many taco enthusiasts do. José @tacotrail says "Visiting each and every taco shop in North Texas is impossible. Businesses open and close, change ownership and staff—not to mention location—without a fancy-schmancy press release from a boutique agency". Exactly what we preach over here. Trompo Tacos (al pastor), Papusa's, and regional specialties such as Monterrey style Hamburguesa's, and campechanas. One thing you'll notice in some of these pics was most taco order comes in a Styrofoam container with your cilantro and onions on the side. Never seen this in Chicago. Not a big deal for me either way though, just pointing it out. 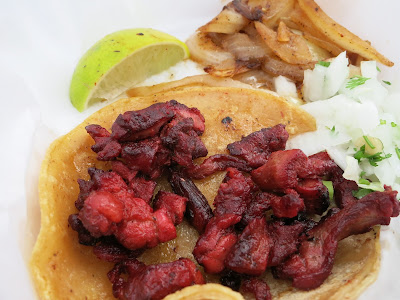 There was no spit in action on my visit but I decided to try an al pastor taco anyway. I also rolled with a campechana which is a regional take on the quesadilla classic. The pastor meat was pretty damn good. Different but good. Heavily seasoned in some bright red pastes I appreciated the side of grilled onions they give when you ask for cilantro and onion. The tacio itself was a little greasy but I never met an authentic one I didn't like. However the steak campachana was my preferred item of the two. As @tacotrail explains "bound by mozzarella and wrapped in flour tortillas that have begun to peel like paper and crisp from time spent on the flattop griddle." 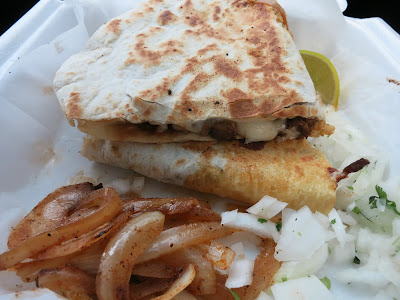 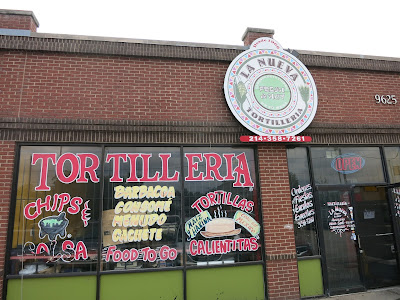 "When people ask for recommendations, I point them to this Bachman Lake tortilla factory" When I read this from José in an article where he ranks Dallas' top tacos, I immediately threw it on my list. The place was ranked #1 in his round-up and everything about it sounded right up my alley when it comes to finding the best tacos in town. I'll let José tell the story. "Four-year-old La Nueva is owned by Gloria Vazquez Martinez, a native of the Mexican state of Zacatecas, whose father opened the first La Nueva in 1968. There are now six family-owned spots in Rio Grande, Zacatecas; another La Nueva in Lewisville; and several other operations in the area." 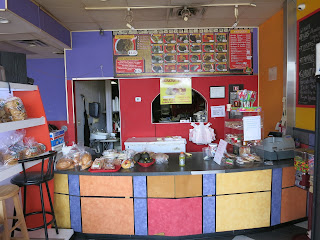 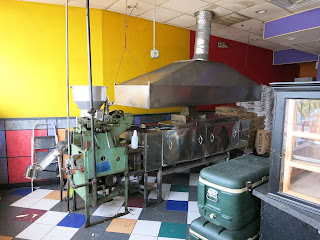 José continued to write "The barbacoa at La Nueva comes in three forms: the common beef head, borrego (lamb), and beef cachete (cheek). Though all are excellent, it’s the fatty cachete with its palate-hopscotching flavor that is incomparable among the trio. Like all the tacos at La Nueva, the vermillion chorizo and the umber-colored pastor must be enjoyed elsewhere. This isn’t a restaurant. There is no seating. I suggest the shopping center’s sidewalk. You could consume them in the relative comfort of your car, but tacos this great demand space and respect." and that I gave them. I couldn't even tell you which one I loved the most but the lamb was as advertised. The other two (pork in verde and roja) were just as good. The homemade tortillas were also on another level so yeah I could definitely taste why this is one of Texas' top taco shops. 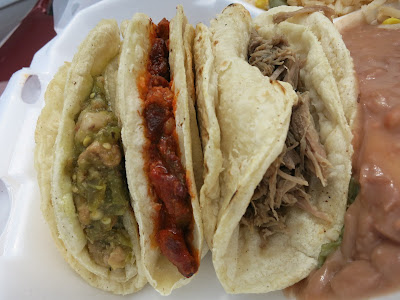 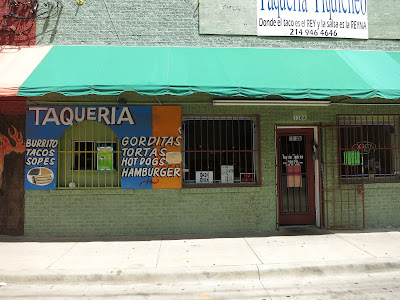 The next stop is named after a city in the Michoacán state can be easily missed. But I had @tacotrail guiding me so I plugged the address into the GPS and we were there. "Pass it by and lose out on the pinnacle of deshebrada de pollo in Dallas." were the words that put it on my watch. Chicken tacos should be easy to make but most places just don't do them justice. Surprisingly I had what might of been the two best chicken tacos of my life while in the great big beef eating state of Texas. One of the two came from here. "The preparation—chicken stewed in a fierce concoction of tomatoes and chiles until it’s transformed into a finely shredded mass—is served in house-made corn tortillas, sturdy enough to hold back the wave of garnet-hued juice the meat can’t help but release. At first, the poultry’s heat is like the breezy licks of a campfire when you’re just outside the ring of logs that serve as seating. And then it’s too late. Nasal passages clear" 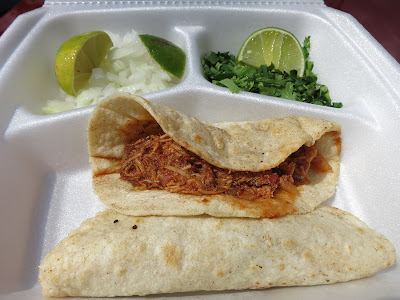 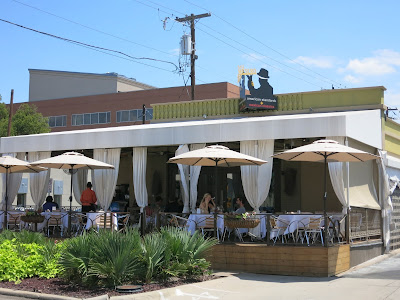 Mr Mesero would be my pick for the first place we ate upon my arrival. With it being my first trip to Texas I wanted to make sure my first meal ate in state was Tex-Mex. Personally I've always loved the Tex-Mex I've made with the help of Robb Walsh and other online recipes. I don't have any problem with it because "It's not authentic" Well no shat Sherlock! That's why it's called TEX-Mex. Sour cream chicken enchiladas, brisket tacos and nachos are just a few of my favorite's. Mr Mesero is a trendy type place incorporating a more upscale menu. For those of us in Chicago, it's like a Tex-Mex version of Big Star. But even better in some aspects. Such as a wonderful trio of salsa served complimentary while you decide what to order. 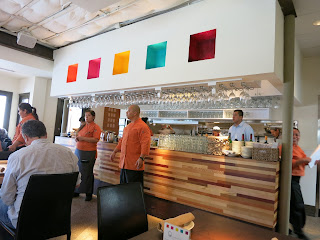 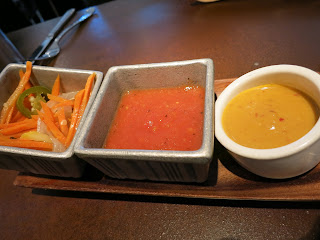 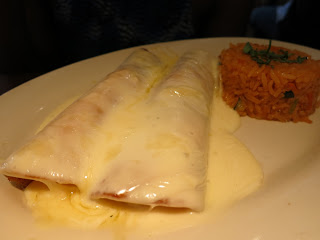 Some sights from Mr Mesero

She went with her home-state favorite chicken enchiladas. I got to have a taste and while they were very rich I thought they were pretty spot on as far as what I was expecting. Just stepped up ingredients, specifically the sauce. I went with the #5 off the "LOS COMBINACIONES" part of the menu. I wanted both a brisket taco and Mico's Tex-Mex cheese enchilada so it was a perfect order. Damn that hit the spot! 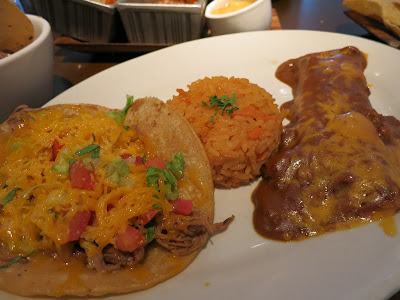