-Got beef?
The Burgers of Iowa

We continue on with hamburger Month as we head North up the river into Iowa. I was once just outside Paul's Big Game Tavern to take a picture of what I thought looked like a cool Midwest tavern. It was on a trip back from South Dakota where we were exploring the Iowa portion of the Great River Road. You can see an old picture of the place in that post. If I remember correctly it was earlier in the morning when I took that picture but I'm not sure. Either way I had wanted to stop into Paul's since a guy from Dubuque whom I randomly met at Toons told me I had to. 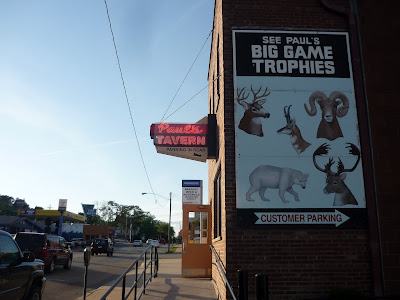 We were just talking and somehow the conversation got into Dubuque then over into food and Paul's was then mentioned. Little did I know then that I was almost there once. I didn't miss out the second time around. We stopped into Paul's on an early weekday around 6p and its a good thing I'm not claustrophobic nor a sufferer of Taxidermy Phobia. Which I guess is a real thing many people have. This is because Paul's is pretty narrow and as you enter your going to see what it said outside you would. Paul's hunting "trophies" hang on the walls, both the left and right side. Stuffed bears and other animals to your left above the people eating in the tiny booths and stuffed mountain goats and other creatures displayed above the bar. 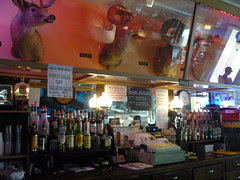 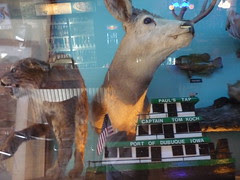 The Views Inside
Paul's is your stereotypical Midwest Mississippi river-town tavern. It's been around since 1948 so this is where the locals go. Not much has changed except the fact theres now government restrictions and regulations to shooting animals such as polar bears. All of the trophies are from the 50's into the early 70's. Paul isn't around anymore but still stops by over the summer when not hibernating at his winter place in Texas. The guy who took the bar over used to bartend there and when the regulars told him they didn't want nothing changed, he listened. Paul's has always been popular for their cold beer and burgers which are still made the same way today as when they first set up shop. 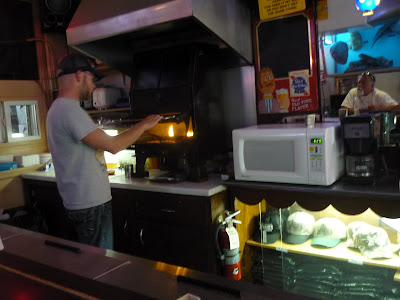 Bartender making our burgers in the Broilator

Paul's uses a "Broilator" which used to be manufactured by the now defunct Norge Company. From Dubuque365.com "This gas fired countertop broiler contains a very well seasoned cast iron griddle. The cook places burgers on this plate and pulls a lever that positions the plate between top and bottom flames. The meat is cooked at a high temperature and does not have to be flipped. The Broilator has been cooking over 100 hamburgers a day for over 62 years! The griddle only holds 8 burgers so when the bar is busy you have to wait your turn." The bartender told me the thing itself was from the 1930's and on weekends when it gets busy theres two people behind the bar. One serving drinks and one making burgers. 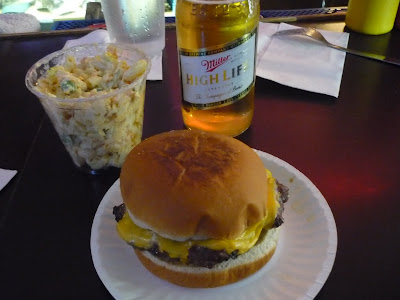 The burger was what it was. I don't say that to mean it sucked but it wasn't the best ever. Still it was some nice fresh locally butchered beef, albeit lean, in a bun and went real well with the ice cold bottles of High Lifes and conversation with the regulars. The price has changed going up from 25 cents back in 1948 up to $2.45 today. Nowadays they also do sloppy joe's during lunch hours on weekdays and macaroni and potato salad too. The mac was pretty fantastic. After that we took a short 2 minute ride over to Fourth Street. 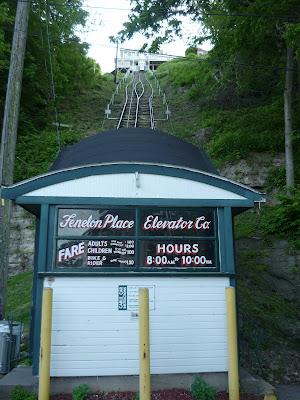 The Fourth Street Elevator in Dubuque

Also known as 'The Fenelon Place Elevator' I never knew about this classic cliff railway cart they have here. It's listed in the National Register of Historic Places and so they claim it's the shortest/steepest railroad in the world. I'll tell you this much, it's well worth the $2 roundtrip ticket to take a ride up. If you do take the ride, take note now that they don't accept debit or credit cards which I didn't see mentioned at the bottom but was the first thing you saw at the top. I had cash but don't forget, it's a little bit of a walk around and then down 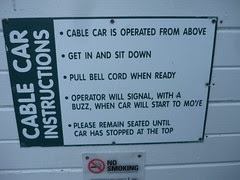 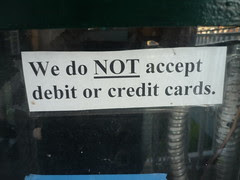 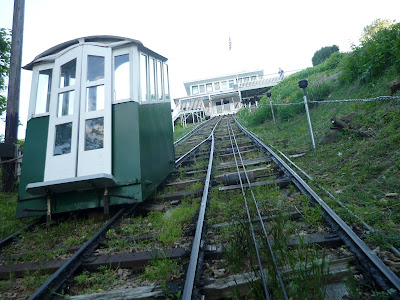 I felt like a kid again getting into the car and then ringing the bell to tell the lady up top we were ready to ride. She had to remind me over the intercom that I had sit down before she could bring us up. The ride up was a little more scarier and had me the slightest bit of nervous. I guess it's open year round but man would it be scary if icy and cold during the winter. There's some beautiful homes in the neighborhood it takes you up into, as well as some great views of Dubuque and the Mighty Mississippi from the observation deck. 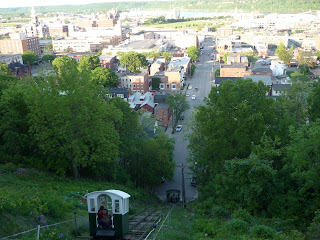 Looking down from the top 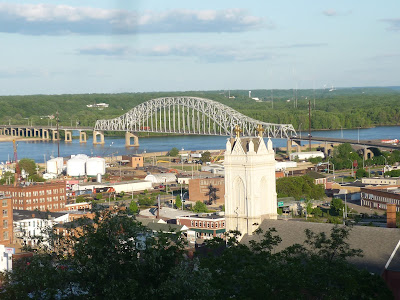