-Got beef?
The Burgers of Minnesota

The chibbqking 'Burger March thru the Midwest' moves on up into Minnesota. One summer back, I forget exactly when, it's been a long ride with alot of trips here huh? We took a ride up the Great River Road while en route to Bayfield, WI. The end of the Mississippi River is in Prescott, WI and that wasn't too far from the Twin Cities so we headed thru for a dinner stop before driving North to Duluth and riding the North Shore Scenic Drive. We decided to check out a locals favorite bar, The Nook, to have our first Juicy Lucy experience in the Twin Cities area. 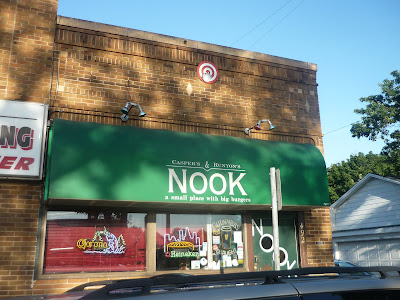 This place is one of the many spots I've hit up over the years that's been featured on Diners, Drive In's and Dives and it was a cool little bar that had a big burger menu with a variety of types. I'll give the show that, they go to great places 9 times out of 10. We were there for a specific burger, the Juicy Lucy which they call Juicy Nookie's on the menu. Its one burger patty topped with a slab of cheese and then covered by another patty making the cheese inside rather than on top. They are very popular in Minneapolis/St. Paul and The Nook is said to have one of the best. 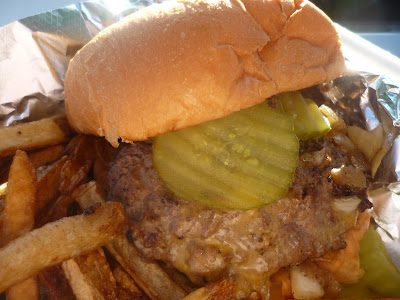 The burger was fantastic as were the fresh cut fries that accompanied it. The kitchen space was tight and the place was packed with a wait around 6p and from my seat at the bar I could see the staff slaving away over burgers and putting potatoes thru the metal fry making machines seen at many Chicago hot dog stands. This is a great place to have in your vicinity. 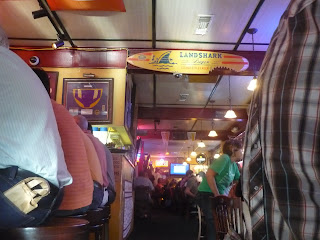 The view inside
I've had alot of great burgers across America, 100's and 100's and this was definitely one of them I remember. Even though I've only had one Juicy Lucy from the Twin Cities I'd be willing to bet this is one of the better versions around because it was fantastic. The best part was the first bite and the cheese oozing out onto my fries turning them into cheese fries. I've recreated these at home and been pretty successful in doing so but theres also just something about being in the city that made them their signature eat and eating one. 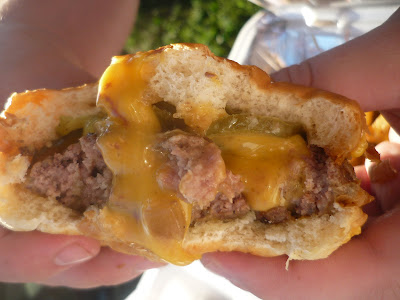 Yet another quality travel post. Thanks for putting in the work researching and actually going to these places, I always check your site before I take a trip.