In case you haven't seen it in Yahoos useless news feed yet, May is National Hamburger Month. Last year we decided to honor thy beef patties in buns by having hamburgers featured all month long during it's celebrated month. We'll do the same this time around and get the party started at a place not really known for parties or anything else except some really nice homes near or right on Lake Michigan. We head North up US41 to check out 'Burger Night' at Inovasi which is every Tuesday at the casual complementary restaurant/bar which features upscale American cuisine made with local ingredients. 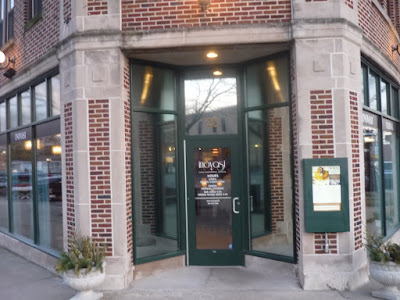 Inovasi just received one of the more "self rewarding" awards an eating establishment can get when they received a "Great Neighborhood Restaurant" award from the folks at LTHforum. I say self rewarding because for the most part the places that receive these awards are lesser known and well less money goes into the place. Inovasi is one of a few of Chef John DesRosiers' projects that have popped up around Chicagoland. Even before it was nominated, when I ate here in the bar area I thought to myself "If any place that gets lots of press already and has become trendy deserves a GNR, Inovasi might be it" 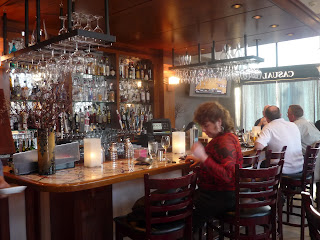 View of the bar area inside
Reason being is the prices are right, better than they have to be to be considered "cheap" in the Northshore and also it's a great place to have in your neighborhood to be able to walk on over to and have some really well executed dishes and maybe some drinks (great selection) and chat with your neighbors and many there were doing that each time I've visited. I could see most people in there knew each other, and many were just hanging watching TV at bar having a beer and some food. I'd like to have this place and it's food and drink menus as one of my local options. The cocktails were real nice when I tried them and the beer selection is great with cans and cows as options alongside an assortment of micro bottles and taps too including a few from Lake Bluff Brewery down the street. Appetizers are exactly what you want from your local "casual contemporary" tavern. 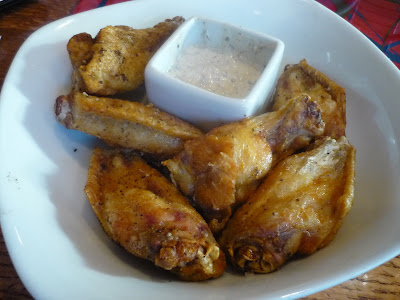 Take for example the wings which come from a local farm and are fried to perfection and served with a tasty Asian inspired dipping sauce. The price is right and they taste great too, some of the better bar wings I've had from anywhere. I'm looking forward to being able to further explore the menu here but so far both visits of mine have been on a Tuesday which is burger night. The menu offers burgers which come from Q7 Ranch in Marengo, IL which makes its ground beef from natural free range grass fed sustainable beef. Not only is the beef quality top of the line but the way they're offered is too. You can get them char grilled or the old fashioned way of flattened until seared and then griddled. Aside from Edzo's down the lake, no other place I know of does them both ways. I for one really enjoy having the option since sometimes you feel like one, other times you feel like the other. 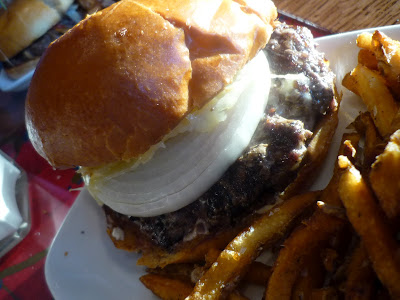 I like the char grilled ones here because the burger is cooked to order and the beef is full of flavor. So far I've been able to sample three different offerings from the burger menu and enjoyed both of the char grilled ones to the old fashioned but Serious Eats loves the bacon loaded offering served griddled and seared, that will be tried on my next visit. Shout out to Daniel Zemans who's article about burger night at Inovasi was what brought it to my attention. My favorite thus far is 'Dave's' which is a char grilled offering topped with artisan Wisconsin cheddar, emmentaler cheese, horseradish creme fraiche and raw local sweet onion. It came cooked to a perfect medium rare and while I love grilled onions on a burger, I love when they have a fresh sliced of raw onion almost as much and Dave's burger shined because it paired with the beef was a magnificent taste that brought me back to the burger everyone ate as a kid at family bbq's or parties and camp trips. Except this was Chef DesRosiers' take on that, not your average uncle's. 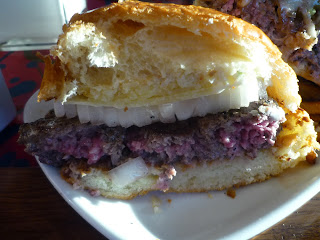 The insides
The beef is what its about with these burgers and it's a blend of brisket, chuck, flank, and short rib which is aged for 25 days and then ground and delivered to Inovasi. They don't stop there though, the fries are wonderful and some of the best you can get alongside your burger. They cut them a little thinner than most places that make fresh cut fries do and I like that because this makes most every cut spud a crispy one. They use organic Kennebec potatoes which I've had before and loved, this time around was no different. The buns come from Labriola Baking Company. Not sure if the fries are on the everyday menu but if not I suggest they be served alongside some fancy melted cheddar spread for patrons of the bar. 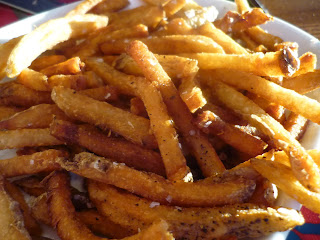 Another offering I really loved from the char grilled options was 'The Chicago Italian Burger' which came with hot giardiniera, grilled onion, celery salt and mozzarella cheese. A fantastic homage to the city that many people who live in, don't have an idea of where Lake Bluff is. 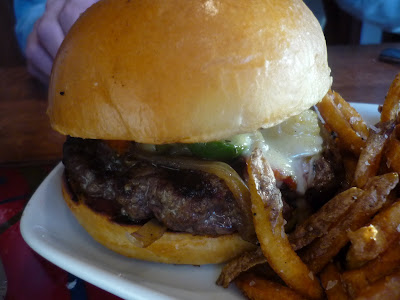 On my last visit I went in expecting to try the old fashioned burger loaded with bacon but was tempted away when I saw a burger being offered that wasn't on the menu the first time I came in. I forget the name and exactly what was on it. I tried tweeting the chef to see if he could remind me but he's been busy with another opening of his in Highland Park. I look forward to trying Moderno one day. But anyway, this was an Asian inspired burger that came with not only the Q7 griddled patty but some pork atop it and also crispy chicken skin and little pieces of duck confit? I forget exactly what but there was a whole lot of stuff going on. 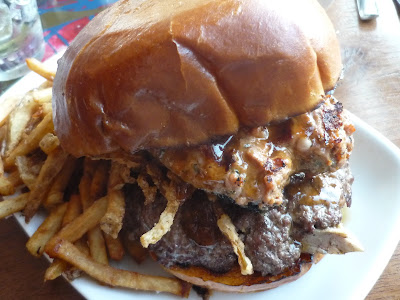 I didn't like this one as much as the others because the beef was lost in the shuffle. I think this one might of been made when someone ordered 'the hobo' which is described as "made with whatever we have laying around" It wasn't bad and I ate the whole thing as fast as I do anything else I like, but it tasted more like a pork sandwich than a hamburger. Again, not a bad thing. 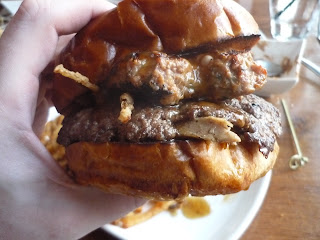 Get in me belly!
Since each of my visits have been with others, I've been able to try a few of the offerings from their regular menu. I haven't had any complaints and the only thing that's gone remotely wrong on my visits was when the automatic hand dryer wasn't working so I was forced to use paper towels to dry my hands #WhitePeopleProblems. I've enjoyed an excellent salad as well as their Rhode Island Calamari which comes stuffed with Spanish chorizo and then grilled. I also took a taste of their organic grilled Irish trout with local grown pea shoots, red organic quinoa and shaved celery salad. All those were great, especially the fish as are the Klug Apple Donuts, fried to order, what a great bar snack. 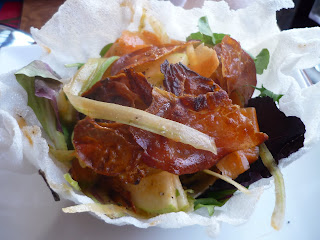 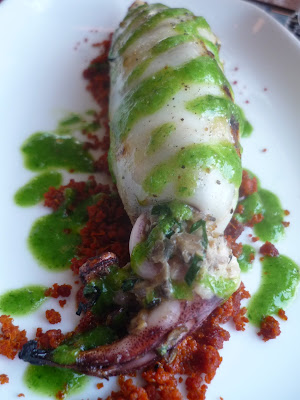 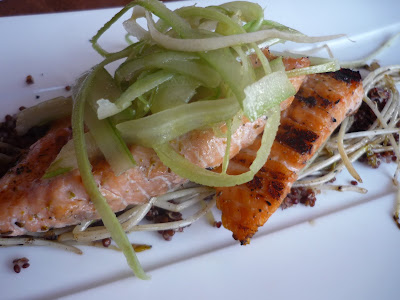 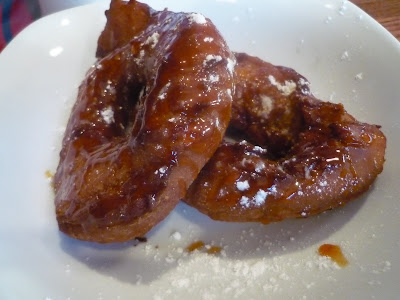 So as you can see, even me, the guy who loves the "old school, been around forever grease pits that serve some signature item" really likes a place like Inovasi. You can go there for a beer and and maybe steak & eggs (I gotta try that!) or plan to have a special persons birthday party while celebrating in the dining room. Either way your going to get great service and some damn good modern American cuisine off a menu created by one of Chicago's top chef's. Then on top of all this when you see the bill, it's not as if it needed to be that, when it could of been more and most around this way wouldn't complain. I've been to places with much less that cost more. It's not cheap but it's casual enough to where you can head on over one night you don't feel like cooking. Even if your from Chicago I suggest you do, you can make a day out of it and take the Metra and then spend some time on the beach before heading over to Inovasi for dinner. 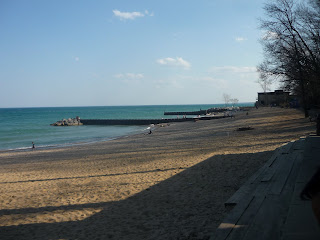 King T this review is amazing! The burgers look amazing. My boyfriend loves burgers so since you've given Inovasi such an amazing review I will for sure be going there!