The goal of my 1st day on my trip to South Dakota was to get thru Iowa and then call it a day so we stopped for the night in Sioux City which is right on the border of Western Iowa across from Nebraska and right below the Iowa/South Dakota border. I wasn't sure what to expect since I've never been here and don't know much about the place. Well you wont be vacationing here but in case you find yourself driving thru or there on business I got some spots for you. Its yet another Midwest river town that seems to be on the decline. So of course they have a gambling riverboat that's nothing special at all along with a bunch of factories, both currently in business and lots of large abandoned buildings long out of biz. Alot of factories were going strong more so than I've seen in most other once thriving Midwest factory cities. 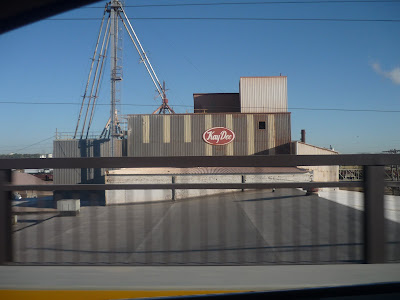 The downtown has some really old historic buildings but like all the cities that have seen better days its got alot of vacated spaces for rent too. The factory district isn't dead and I saw quite a few people walking around working at different spots around the area. They also have a few amateur sports teams and a downtown events center. We stayed at the Holiday Inn downtown which wasn't far from our two dinner stops known for their 'tastee's' and Charlie Boy's aka Loose Meats. First up on the list was Tastee Inn & Out. 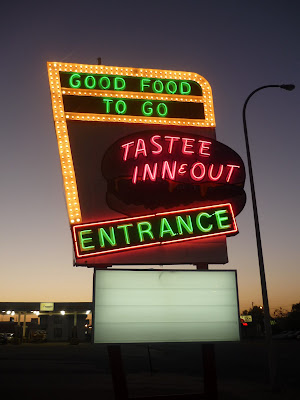 This locals favorite spot is a drive thru with a walk up window so there is no dining indoors, its in your car or outside at one of the picnic tables. The weather was wonderful so we we ate at a table so we went thru the drive thru and ordered up a few loose meats (Iowa's other signature sandwich) along with the roadfood rec'd onion chips which were classic in my book. They take pieces of onions in chip like form and fry them up fresh and they are served with a thousand island/ranch type dressing and make for an excellent fast food eat.

Onion chips were one of the best fried onion sides I've had
In case you don't know what exactly a loose meat is, its basically a sloppy Joe without the slop or a crumbled hamburger as opposed to in patty form. They arent the most tantalizing sandwiches out there but they're a special regional treat loved by locals and I do enjoy them when I have made them. They are called Tastee's around here and come with ketchup, mustard, pickles and chopped raw onions. One will cost you just about $2 and they also come by the bag with six in each. Yes its true that loose meats are for the most part under seasoned, they also always taste homey and comforting. These had a unique taste to them and were actually my favorite loose meat of the spots we stopped to try them at. I guess I just like loose meats because it wasn't anything to drive out of your way for and I wont fiend for one later in life but I liked it and would go back here if ever find myself back in Sioux City for some odd reason. 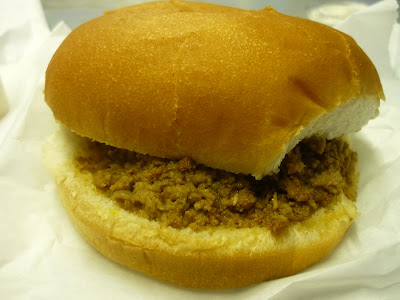 There isn't much on the non-chain dining front in SC so after our appetizer it was off to another roadfood rec'd spot for dinner and drinks. The Miles Inn is another classic Midwest tavern just a few blocks from Tastee it's frequented often by locals. In northwest Iowa you'll find more places serving loose meats than hamburgers and you'll also come across more names for them than most foods. In these parts they are called 'taverns' not loose meats nor Tastee's although at Miles Inn they're called Charlie Boys. Try and keep up. 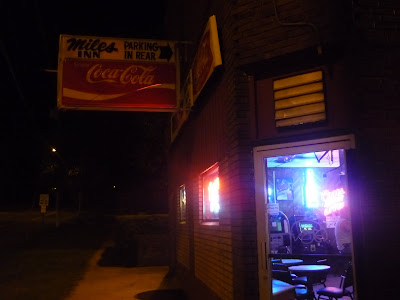 We were there on a Monday night and the place was packed for the MNF game. Drinks are cheap and they serve ice cold schooners which were the drink of choice. The menu was simple, Charlie boys, Charlie boy nachos (avail. until 5p) and bags of chips. We sat at the bar and were able to watch the bartender who was working solo that night get at it, making as many Charlie Boys as drinks were poured, and people weren't taking it easy that night on the alcohol. They have a few steam table/pot luck style concoctions that hold the meat and buns and they come with cheese, mustard, ketchup, onions and pickles.

Sign outside and the view from my seat at the bar
These sandwiches were double maybe even triple the meat of the Tastee's and they come with cheese and are $3. They were full of peppery flavor, maybe a little too much. I liked them but only ate one because it pretty much tasted like black pepper with a dash of meat and toppings. We did end up watching the rest of the first half of the football game and having a few more drinks and enjoyed that very much. The bill was dirt cheap and the service was excellent, the bartender was a cool dude and insisted I be back. I would highly rec stopping in for some drinks since its a classic Midwest tavern with a great atmosphere and while your there, have a Charlie boy just so you can say you've had one. 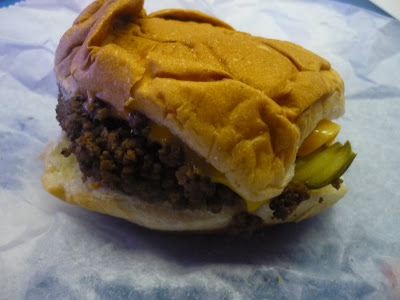 We called it a night after a short walk around the river boat and I was up the next day at my usual early time. My travel companion isn't an early bird and she was a real trooper on day one so I let her sleep in and I was off to have Coneys for breakfast. If it's an old Midwest city or town that has a working class blue collar community than the odds are with you for there being a Coney dog place somewhere in town. As is the case with Detroit, there isn't just one but two that duel it out for top dog in town. Both the two spots I visited have a history and longstanding presence in the community. The Milwaukee Wiener House and Coney Island are both downtown and within a walk from each other just like the dueling Coney joints in Duluth seen HERE. My first stop was at the Milwaukee Wiener House No. 1. 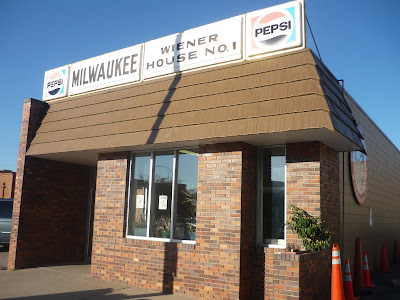 Another roadfood rec'd stop I went in about 8:30a tues. morning and was there for a Coney with everything. There was a table of old timers and a few more that came in as I ate but the place opens at 6a so I'm sure there were a few others earlier in the morning. It was a classic coney joint in every sense. While not as old as some others I've been to it had the look and cafeteria feel and interesting history. It is owned and ran by two immigrants from Greece who are brothers in law and married sisters and bought the business in 1960. One of the owners, Gus, wasn't even the first from his family to go to Sioux City from Greece, his father worked at a meat packing plant there and then moved back to Greece where he married and raised his family on a farm he bought. They have 2nd generation customers and people who moved away long ago but always come back to SC for a Coney.

View as you enter and the hot dogs sitting on the grill in the window
One of the owners was just getting a new batch of coney sauce which was bright red and greasy just like it should be. I ordered mine with everything which is mustard and chopped onions included and was able to put down the dog in a couple bites, these were like slider dogs. I enjoyed it for what it was. Just like with loose meats, I just so happen to like Coney's as much for their history as anything else. The dogs are almost always Oscar Meyer like but that's how they've always been. Coney's arent for all but they're something I always get when I see an old shop like this one serving them. 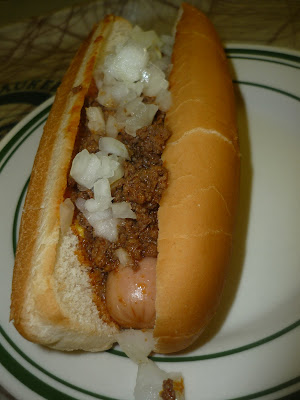 Just a couple blocks from the Wiener House is Coney Island, it's dueling nemesis in Sioux City where I'm sure there have been many heated arguments over who's Coney is better. So you know I had to check out both. 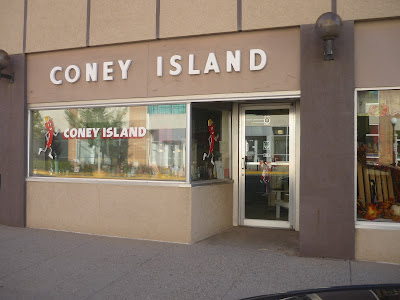 I headed over here to see what was up and how the two compared and it was just what I expected and just like so many other Coney spots around the Midwest. This place has actually been all in the family since 1921 and has an interesting history. It's actually famous for their taverns (loose meats) which they actually call taverns. It became so when Ye Olde Tavern, the tavern who's owner is said to create the loose meat sandwich, closed down and the owner of Coney Island who was best friends with the owner of Ye Olde Tavern was given the original recipe.

View as you enter and the hot dogs sitting on the grill in the window
Well as bad as I wanted to try one they were just getting started on making the mixture in back so I only had a Coney which is their other claim to fame. Just like the rest of the spots it came with mustard and chopped raw onions and was good for what it was. The cheap dogs work well with the greasy ground beef sauce and I actually preferred the sauce from Coney Island Wiener House for its spiciness chili flavored factor as opposed to Milwaukee Wiener Houses sweet cinnamon flavor. 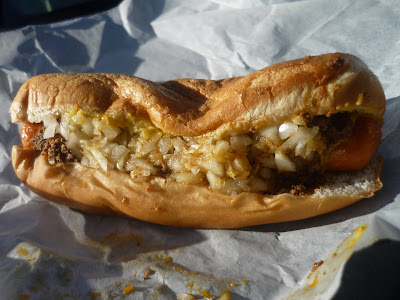 So after breakfast it was back to the hotel where we got ready to head off to Le Mars, IA located about 40 minutes North of Sioux City and not far off our route to South Dakota. This is where we would be stopping for early lunch. Le Mars is the self proclaimed ice cream capitol of the world and home to Well's Dairy which is the worlds largest producer for ice cream novelties under one roof and most known for its Blue Bunny ice cream. You can visit a museum with old school ice cream stuff and history for a couple bucks but we passed on that and headed to another roadfood rec'd locals favorite called Bob's Drive In. 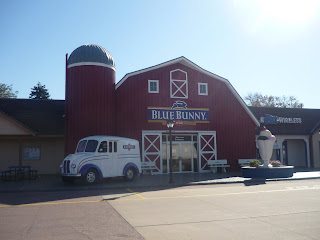 Since 1949 in Le Mars, IA
We parked in the gravel lot at this country Drive In similar to so many around the Midwest and the rest of the US. We walked up to the window and took a look at the menu which included the regulars like loose meats and tenderloins as well as plenty of ice cream options. We were there for the loose meat and their most popular item, the Bob Dog. Its a natural casing wiener from the local butcher topped with loose meat and the usual dog toppings of ketchup (of course I got mine without), mustard and onions. The loose meat was ok if anything, not much flavor to it at all but it did have a nice fresh baked bun. 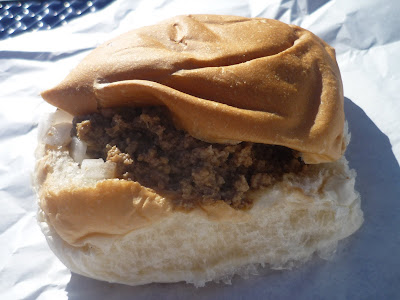 The hot dog was awesome and an excellent roadfood eat. The loose meat might not of had much flavor but the wiener did and was a-ok by this Chicago boys standards and the bun was great as well. Stop in for one of your ever around, its worth a detour if your a hot dog lover. Hope you enjoyed today's food trip and do stay tuned. Plenty more foodventures to come @chibbqking. 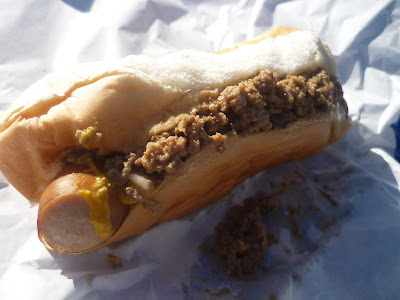 The Bob Dog from Bob's Drive In