July is National Hot Dog Month. I thought now would be a fun time to share some random hot dog spots from around the Chicagoland area. Since July is the seventh month of the twelve and also since seven is a lucky number we'll take a look at seven hot dogs found around this way. The truth is it might be near impossible to go and try each and every stand in Chicagoland but if there's anyone who's been to more than most, I'm one of them. I don't know the exact stats but I would have to bet that Chicagoland has (by far) more hot dog stands than anywhere else in the world, here are seven to scope out. 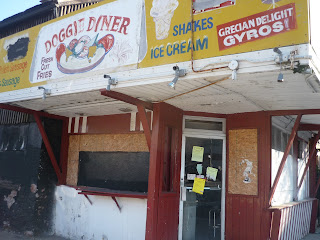 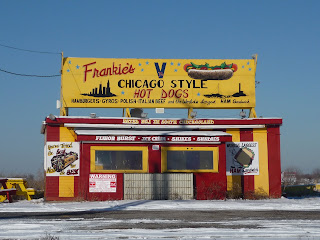 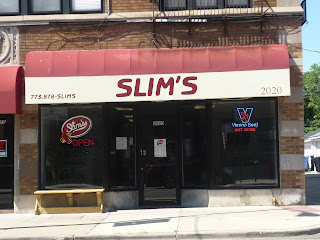 Located on Montrose in Ravenswood
Slim's is one of the newer to the scene hot dog shops in the Chi. As many as there are up and running there are that have come and gone. Of the seven spots we take a look at today, Slim's was my most recent one visited. I like the place and it seems to be doing well in the Ravenswood neighborhood but I went in with the hope they were another place going minimalist style since they have the Vienna Beef neon in the window and also do fresh cut fries. Well the fries were great and the dog was good. I think the VB natural casing dogs are superior to all others including their own ones which arent natural casing. Nonetheless Slim's looked like a place I'll be back to. Burgers and sandwich options looked and smelled sweet. 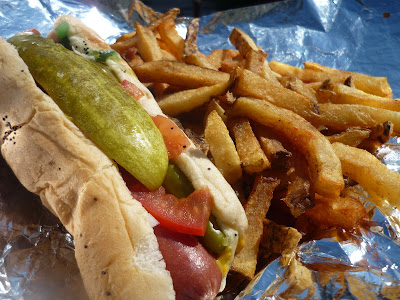 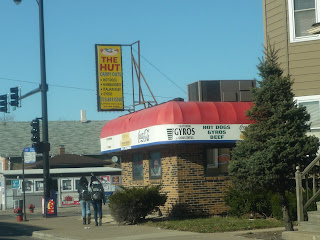 Located at 36th and California

The Hut is a popular place with the locals who live near there in the Brighton park neighborhood. As I was saying we as a city have 1,000's of these type of spots. They use Red Hot Chicago brand hot dogs which is yet another stellar wiener company used by many hot dog stand around Chicagoland. The menu at The Hut is just like the rest of the places similar to it's. Hot dogs, burgers, beefs, gyros, Polish sausage and so on. If your from near there you've had yourself a few hot dogs from The Hut. That's one of the fine things about living in Chicago, every kid has a local hot dog joint they grew up on. 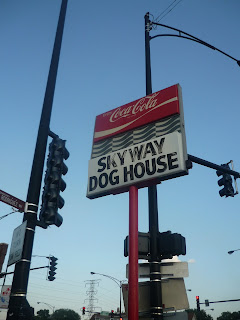 Eastside Chicago near Indiana border
The Skyway Dog House has been helping me out with a quick no time wasted bite to eat since I've had my license and been going up to Michigan City over the Summer. Located on Ewing right off the Chicago Skyway they've been serving the people of the Eastside for over forty years. A member of the Vienna Beef Hall of Fame and a well deserved one. Again I wish everyplace out there would use the natural casing dog but a Vienna Beef dog that's not natural casing is still better than most everyone else. 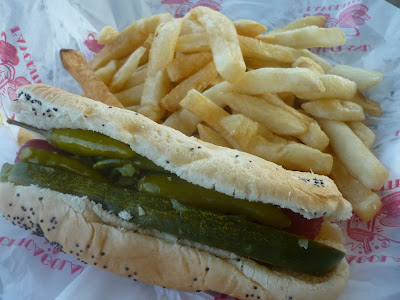 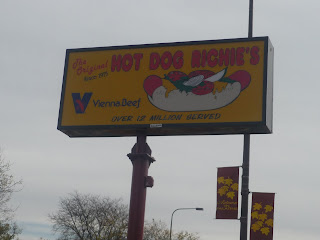 Hot Dog Richie's like the rest of the places featured here is a family owned joint that keeps their neighbors happy with quick tasty food at good prices. They've been a staple in Palatine since 1975 when they first opened up. The menu is just like the rest of the spots and the service is too, friendly and efficient. People not from Chicago might recognize that each 'Chicago style' hot dog is different in these pictures and this is true. Although we have the standard definition with listed ingredients, not every place offers up each exact topping or uses a poppy seed bun while other places load them with even more than whats listed in the definition. Then there's the other Chicago style, completely different which is also my favorite, the minimalist. Hot Dog Richie's drags 'em thru da garden as you can see in da pic below. 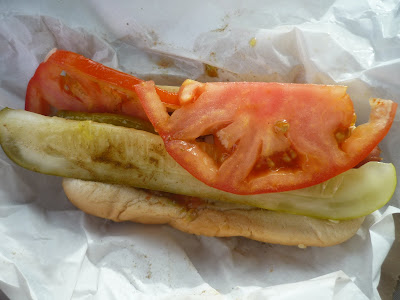 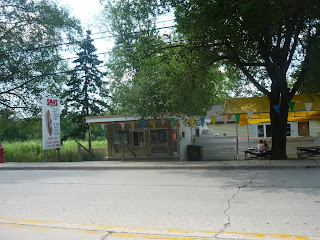 Located in Willow Springs, IL
Sma's is one of the 100's or so seasonal hot dog stands in Chicagoland. As you can see in the picture above from across the street, they're just a little shack you walk up to and order your food at outdoors. They do have picnic tables to sit at off to the side. It's located along Archer ave not too far from the big golf course out there and the couple times I have stopped buy always saw some guys in their short shorts and bright colored Polo shirts having a hot dog or burger. 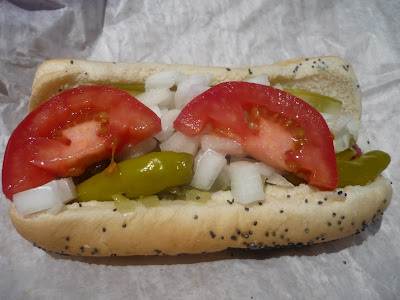 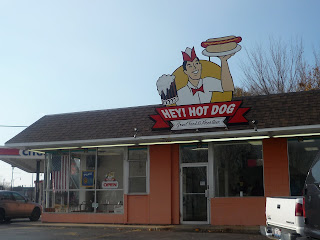 Located in Joliet, IL
Hot Dog month is in July which also happens to be the most "American" of months with 4th of July also being celebrated during this time. America is the land of regional hot dogs but one variation that can be found just about anywhere is the American classic, the chili cheese dog. I stopped into a place in Joliet called Hey! Hot Dog for some homemade root beer when I drove by one day last year. I ended up grabbing a CCD with my root beer and enjoyed the classic version of it. The cheap hot dog with a mess of chili and some fake cheese with raw onions on top is a guilty pleasure of mine. 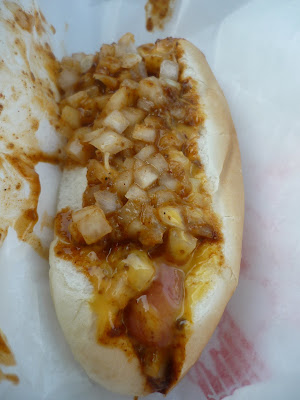 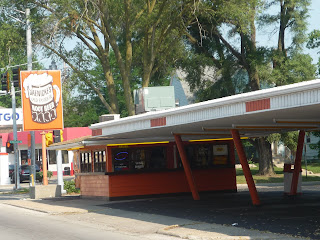 Let's see All American related food trends. Hot Dog's? Check. Chili Dogs? Check. Root Beer Stands? Check. Drive In's? Check. Jaenicke's Root Beer Stand in Kankakee, which might be outside of Chicagoland but is a place visited by folks passing thru and should there ever be football again, people going to Bourbonnais for Chicago Bears training camp. Jaenicke's has been around these parts since 1940. Located right along the river they are famous for their homemade root beer and red hots. 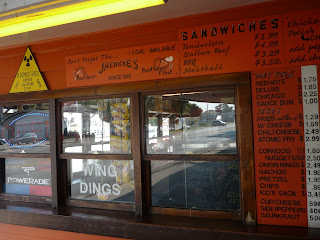 Walk Up Window (Click all pics to enhance)
I was put on here by a poster at LTH who said " But the real draw is the tiny hot dog with a sauce that is somewhat unique. It's similar to the sauce used on Rochester white hots (Zweigle's, eg). I've had a similar condiment in Toronto, and it's in the same neighborhood as the red onion sauce one sees in NYC. Born of leaner times in an already modest place, Jaenicke’s offers "sauce buns," a meatless treat not unlike Chicago's gravy bread." I tried these suckers and liked them in that guilty pleasure way. The sauce tasted like a mix of chili and spaghettio's yet somehow it all worked well. Happy Hot Dog Month! 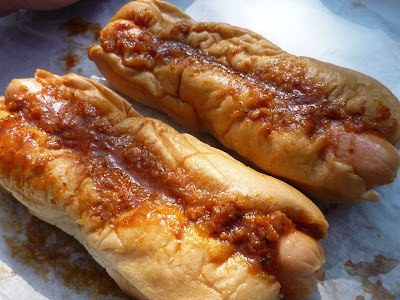 Man this blog always makes me drool. I've started a bucket list of food I need to go try in the states. One day I'll try them allll!