After logging in some miles down Highway 51 towards Chicago last summer we took a little sidetrack that would take us to Jefferson, WI which is the home to another very old seasonal burger shack. Wedl's is a 90+ year old joint that's been mentioned and rec'd by real deal bloggers and is also featured in George Motz's book-Hamburger America. It hasn't always been named Wedl's and used to go by Peterson's until it was sold to a family of longtime customers who just changed the name but not the burgers or how and where they are made. Much like Pete's and the Lake Mills VFW Post featured on S'C'&C before, Wedl's is a shack on the sidewalk. 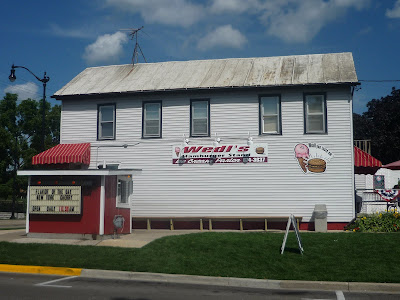 a locals favorite in Jefferson, WI

The picture above is the view from across the street and as you can see, the shack is on the left in front of the building which is an ice cream parlor. There's also a patio to the right for people to sit at and eat. If you go inside the building where ice cream is served you can see some old time photos of the hamburger stand and other shots of it from thru the years. You walk up to the sidewalk shack outside for burger orders. The menu is rather packed and I'm sure most of the items have been added on the last 20 some years. The grill dude told me the steak sandwich was also very popular and really good but I was there for their classic burgers which they've been doing up the same since the shack started.

"Wedl you taste one"
Seen in the large photo below is a shot inside and a look at the grill where the burgers are made. Wedl's gets fresh ground beef from the towns butcher and they start off as balls that are smashed into patties making them the much loved by myself and others, 30's style burgers. Next to the patties are a pile of onions grilling away that flood the air and can be smelled by anyone near. When your burgers are ready you take them over to the side of the shack and can top them with ketchup, mustard and pickles. I ordered a double with onions and put some mustard and pickles on it and I was ready to go. 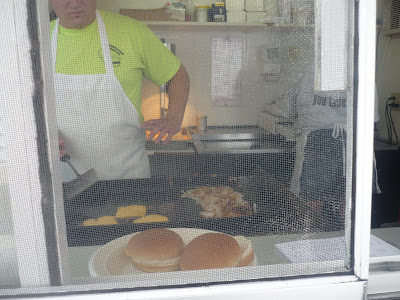 Well you can put another burger on the board for WI. A classic 30's style burger with fresh meat and potent and perfectly grilled onions and just mustard and pickles to top it off was the way I love them. Add in a soft bun and you got yourself a great flavor combination. Wedl's took the bronze for burgers on a trip with as many good burgers as I have ever had . The reality is six of the spots were fantastic and further proof Wisconsin is a great burger state. Jefferson is 40 miles east of Madison, WI and worth the stop if in the vicinity, just "Wedl you taste one." 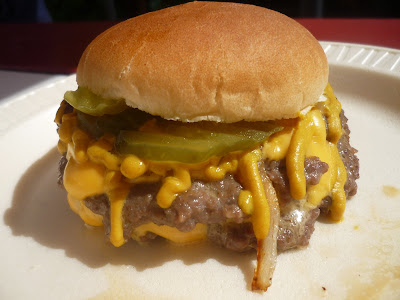 See this photo of Wedl's on The New Yorker website from the 2012 Republican primaries: http://www.newyorker.com/online/blogs/johncassidy/2012/04/showdown-in-wisconsin-can-santo-pull-of-a-shocker.html