We travel on here for Travel Month at chibbqking. I hope y'all enjoyed the trip to SD. Today we head into the heart of the Midwest to Iowa for another regional treat. While en route to SD we traveled thru Iowa. So with this I knew my first food stop of the trip would be tenderloins for lunch. The massive tenderloin sandwich is a staple throughout Iowa where each regional has a slightly different take on it from them from the next. I highly rec you check out this guys site. It has to be one of the best food blogs focusing on a particular regional eat out there. Its all about the tenderloins so if you find yourself anywhere in Iowa and want to try a tenderloin, check over there, he's got a spot for you. I found a couple spots that came rec'd by the King of 'loins that were en route along I-80 and thus they would be our first stops of the trip. Goldie's Ice Cream Shoppe in Prairie City, IA
Goldie's is actually about 18 miles east of Des Moines in Prairie City but it's just a 10 minute ride off the highway and our first stop of the day. The mom and pop lunch spot is a favorite with locals and maybe the only food choice in town since I didn't see anything else except for alot of farms and a mill on the towns main road. It also won the Iowa pork producers best tenderloin in state a couple years back. The Iowa breaded tenderloin is a pretty simple sandwich and sometimes simple is best as was the case with the 'loins at Goldie's. Perfectly breaded and really juicy on the inside with some nice battered fries served alongside it. Standard toppings on Iowa Tenderloins are mustard, ketchup, pickles and onions. I ordered mine without ketchup and they used red onions on theirs. It was a very good sandwich and more than filling, tenderloins are massive, those farmers need their fuel. 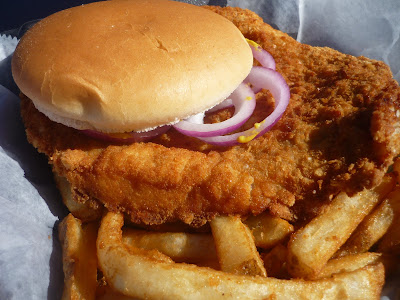 As filling as the first tenderloin was I couldn't go thru Iowa only having one. I needed to compare a couple different spots. The other spot that really caught my eye on the Des Loines blog was Kelly's Little Nipper located on the eastside of Des Moines. We visited there last Fall and I have since heard they had closed down for a while and then came back but I cannot verify that. So call ahead or if anyone has info to share please post in comments. Kelly's is a bar that has been in the same place since something like 1929 or something like that and they put out a mean tenderloin. Its a real old school Midwest tavern that sits in a house and serves a working class community in an area that's now become the Mexican hub of Des Moines. I saw some intriguing taco trucks etc... 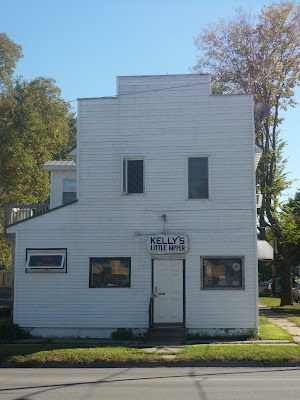 When you take a look at the bar from the outside or in the pic above you probably get a picture in your head of what it looks like inside and that picture is most likely dead on. Its a dark bar with a pool table that hasn't been fixed up in a while, they got a men and womens bathroom with one stall in each and the cooking section is part of the bar so the grease stains are abundant. If you pictured some old time regulars in there playing lotto scratch off cards, smoking lots of cigarettes and having an inebriatedly good time on dirt cheap drinks at 1p on a Monday, you were also dead on. I asked the bartender about a sandwich and she said they didn't have them and then said "well I can turn the fryer back on but it will take 15 minutes" and I said that was cool and we ordered some dranks and waited. View of the room from my bar seat, the fryer is at the end of the bar on your left as you enter
After a couple drinks the sandwich was ready along with the onion rings which were breaded after our order was placed. We took it outside to the patio and dug in before hitting the road again. Well first thing upon opening the bag is noticing how massive this sandwich is. I mean the thing was huge and a half of it could easily feed one, maybe two if you arent hungry. Each place does this simple recipe their own way and at Kelly's its served on a sub roll as opposed to the more common hamburger bun. The 'loin itself was very crispy especially on the edges, I liked that and they loaded on the mustard, pickles and white onions which was also a plus for me. The onion rings were fantastic and really juicy due to being cooked perfectly. 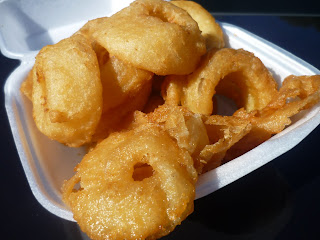 Onion Rings from the Nipper 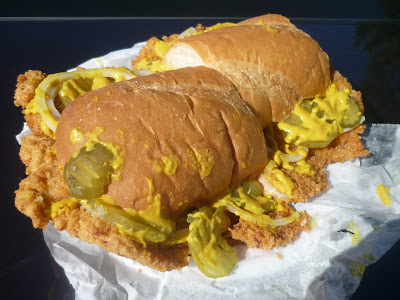 If I had to pick which one I liked better it would be Goldie's because of its juiciness factor. However the Nipper's sandwich wasn't no slouch and was the better atmosphere of the two stepping back into another time going inside one of Des Moines oldest bars. I could eat either or again and would be happy to do so. With the Cubs playing Triple A ball these days you might as well go to Des Moines and get a tenderloin sandwich and watch a real Triple A team in the Iowa Cubs, are there any players down there that can help in the near future? No. 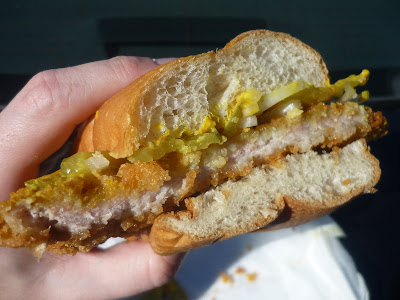 Their grinder is a massive sandwich as well.