We continue our celebration of National Hamburger Month with a trip up north along Lincoln avenue to neighborhood favorite Jury's. Located in North Square Jury's has been on the corner there since 1979 when they first started with a goal of being the neighborhoods place to eat and drink. Over 30 years later and they are still the place of choice for most of those in the neighborhood and also thru that time they've become well known throughout the city for? You guessed it, their burgers. 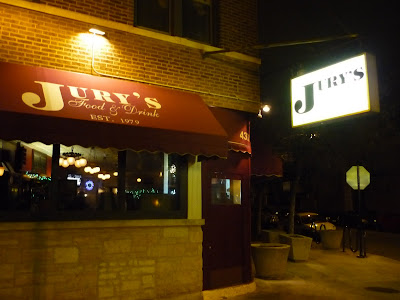 Located in the North Center Neighborhood

Jury's might be a little classier than your average neighborhood haunt but it's still blue collar for what the neighborhood has become which is a trendy hip spot to hang out. Jury's has stuck with what made them a popular place before the hipsters and yuppies were around. I remember when I first started using the internet as a tool to find great places to eat and finding Jury's after searching around for the city's best burgers. This was over ten years ago in my high school days. I remember we ended up going one night and really liked it and it became a regular in our rotation one summer. Then for whatever reason I stopped going after coming home from college. After a recent visit I told myself I wont let that much time go between visits again. The reason was because the burger was as good as it ever was. I went with the standard half pound charred burger with cheddar and fried onions and it didn't disappoint. 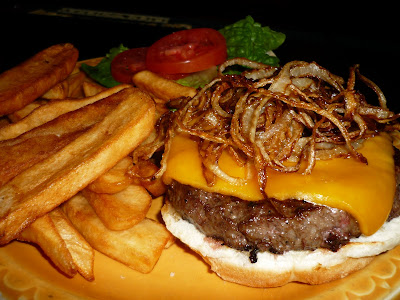 Just like the bar that serves them, theres nothing fancy or trendy about this burger. It's just a classic example of a tavern burger that's been listed in too many to name 'Best of Chicago' Burger lists. They cook to your desired doneness and as always mine was perfect. They offer up raw onions but the little fried shreds they use make fried the way to go when they ask you which one you prefer. While steak fries arent my favorite form of french fry I still enjoy them especially when served aside a tavern burger like those at Jury's. They just work well together and even better, they also have steak sauce for your dipping pleasure. Jury's offers up a full menu that I have heard has some other nice options on it, however I have only had the burger, it's too satisfying each and every time to pass it up anytime I'm there. Wednesday's are 'Burger Mania' and they offer them for $5.95. It's too hard to name one burger the best but Jury's does have one of the best bar burgers in the city. Count me amongst the many fans of it. 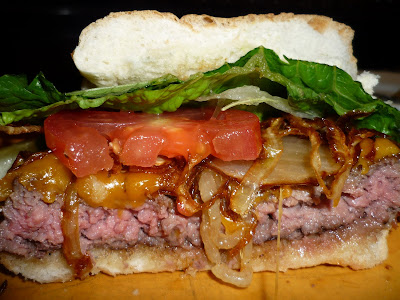 You should also check out Meatheads Burgers & Fries! They have an amazing amount of topings options meatheadsbugers.com/menu