Happy National Hamburger Month. All burgers, all month long. Last Fall I was driving on North ave when I cruised by on old seasonal shack I had long wanted to try and that day would finally be my time to do so. Jim's Hamburger Heaven is a seasonal walk up hamburger stand with some damn good root beer located at the corner of North ave and York street in Elmhurst. It's been a summertime tradition in the area dating back to the 1940's. Let's take a look, shall we? 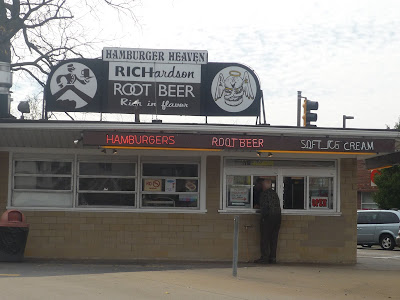 a locals favorite in Elmhurst, IL since 1948

We all know how the seasonal summertime shacks always entice me and Jim's Hamburger Heaven had done so for a while before I finally got to stop. I was always either full from eating a combo at Johnnie's minutes before, not too far away down North ave, or I was passing by in the winter when they are closed. As seen in the photo above they also have a Richardson Root Beer keg which is an old popular brand not often seen anymore. I cant verify as to whether they just make their own these days or this is the old brand that used to be popular back in the 50's but a search seems to show it's not around anymore. However I can verify that's it's a legit brew and far from commercial. Now whenever I pass by which isn't often I always stop in for at the very least a root beer float to get my fix of fresh brewed root beer. They still serve the root beer out of an old wooden RICHardson Root Beer barrel and just like the old company used to say, "it's rich in flavor". 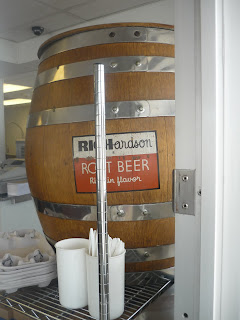 Root Beer from the barrel at Hamburger Heaven

The go to food choice at Jim's Hamburger Heaven are, well duh, the hamburgers. The most popular burger ordered by generations of family's from the Chicago suburb is the double decker. They claim theirs came before the Big Mac. Everything on a double decker cheeseburger from Jim's include the same things as a Big Mac including a secret sauce. The other popular choice is their olive burger which is a double decker (minus the special sauce) with sliced green olives. The history of the olive burger seems to trace back to the Lansing, Michigan area. Oddly enough with as much as you find on the internet these days there isn't that much on these out there. But enough searching leads you to some forum talk and reviews of the olive burgers from Lansing and other places in the Western Michigan area. 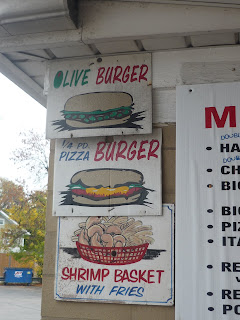 Part of the menu outside the ordering window

An olive burger is a burger served with sliced green olives and a mayo like sauce on top. I'm sure many places have their own way of making them and some places are said to put lemon juice and black pepper in the mayo/olive mixture as well as juice from the canned olives while others just use mayo and sliced green olives combined. Over at Jim's they serve them with a mayo blend and sliced green olives on the bottom in double decker form. I enjoyed my olive burger more than I thought I would when I tried one for the first time. It just worked for whatever reason and I now look forward to having another from Jim's Hamburger Heaven this summer. I hope to also find a famous place for them in Michigan or somewhere else, so if you got a spot let me know. Stay tuned, many more to come. 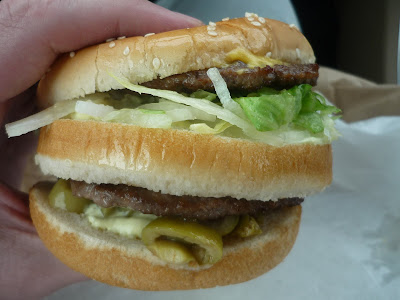