Is there anybody out there that does up the Burgers of Wisconsin like myself? I don't think so. Last summer me and a friend took a cruise up into Wisconsin that brought us around the entire state. We even spent one night in Duluth, MN which was an absolute blast with some great eats including a legendary burger located over the bridge across the lake in Wisconsin. The Anchor Bar and Grill is well known for its burgers and good times throughout the state. They've been serving the locals of the Twin Port's (Duluth and Superior) since 1977 and judging from my first ever visit I don't think much* has changed. The bar sits in an unassuming building on a vacated block in a deserted part of town. The only other thing in the vicinity and open after 8p was another low key bar with the same designed building as Anchor a half block down and there was also a steak house and cocktail lounge a few blocks down around the corner. The town was eerily quiet the Saturday night we visited. 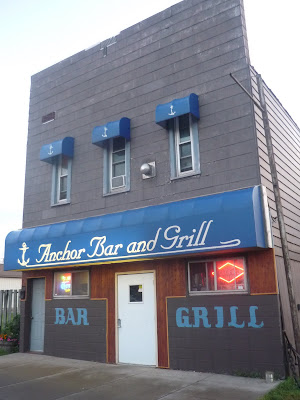 a locals/tourist favorite in Superior, WI

The old school bar is very dimly lit and somewhat narrow with the bar being on your left as you enter and the kitchen at the end in back with tables filling out the spot to your right. The walls are filled to the max with anything having to do with sailing and boating. There wasn't a line since the dinner rush was ending but the place was pretty much packed with there being a few seats at the bar right in front where we entered. So we sat down where I where I always like to sit when visiting popular locals spots and placed an order for a drink. I went with a large Grain Belt on tap. 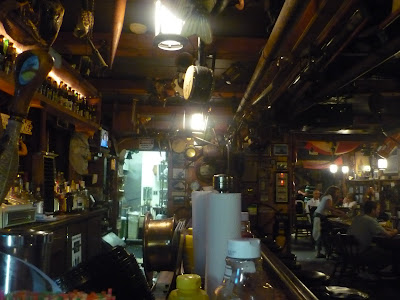 The view from my seat at the bar

By the descriptions and accounts from people who told me I had to go here, they had me thinking it was one of those locals spots where they can be crabby and arent trying to make any friends but the bartender and burgermaker were really nice and very helpful. She actually had the same camera as me and couldn't figure out one of its functions and I showed her how to do it and she gave us the next round on her. The crowd was diverse with there being a few older locals and a younger 20's and 30's crowd out to start their night as well as some families both local and tourists and they were all there for the burgers and many for a beer or two as well. 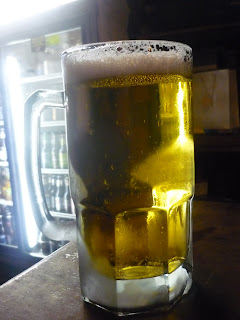 Burgers are pretty much all they do and they come hand patted in 1/3 patties which are listed in the "1/3 pound Burger" section which is one of three parts of the menu with the other two being "Bigger Burgers" and "Other Grub" so there are no appetizers or anything else of that nature. You can add on fresh cut fries for $1 and that's well worth it, as the fries at Anchor are as good as any bar out there. The 'Other Grub' section has grilled cheese (plain or with ham) and the bartender told me that people have now been coming in and ordering burgers with grilled cheese's as the bun's aka Fatty Melts, though she also said don't tell too many people. Sorry sweetie. 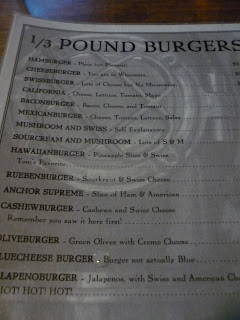 The 1/3 Pound Burger section is impressive with there being many options as you can see on the menu above. The one they claim is very popular and was first done at Anchor is the Cashew Burger which comes with cashews and Swiss cheese. I was tempted but with this being my first visit I had to go BIG. In the bigger Burgers section they have the Anchor Burger which is two patties with lettuce, tomatoes and cheese and the Galley Buster which is three patties (one pound) and three slices of cheese. I went with the Galley and the others did up the Anchor. The only thing they're going to ask you upon placing your burger order is if you want your onions fried or raw and "do you want fries with that." Yes you do. 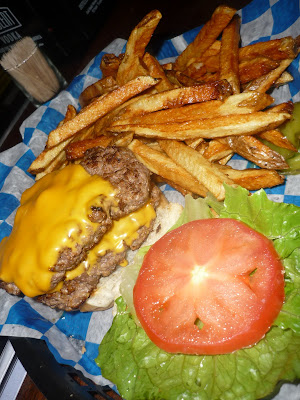 Despite being featured on roadfood and always mentioned in any best burger in Wisconsin list and always talked about when talking best burger in the Lake Superior region Anchor Bar hasn't changed much and the 1/3 pound burgers will cost you around $4 with fries while the Galley Buster will set you back $6.50 with fries. Quite a steal for a city boy like myself. The beef is always fresh and delivered that morning and the taste of it is what stands out most when eating their burgers. In case you didn't know, this is a good thing. The Galley burger might look like one of those gimmick eats seen in many tourist places and on Food Network but that it is not. This was my 2nd favorite burger of this trip and we went to nine spots so stay tuned, May is National Hamburger Month and it's all burgers all month on chibbqking. 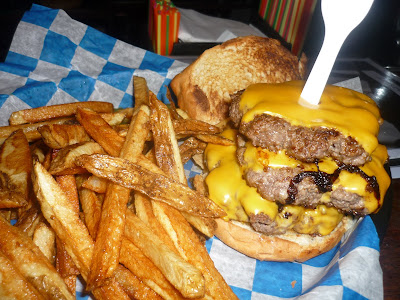 The Galley Buster Burger from Anchor Bar and Grill

The burger isn't all that hard to eat you just had to have two bites to finish off top and bottom but the beef was very fresh so some bites it tasted like the burger that it was while other bites where I got no bun it was like eating a meatloaf. I wasn't even fully stuffed but I wasn't able to convince myself to order a fatty melt if for anything just to have a few bites and snap a few shots, so it did get me full. The burgers tasted like I'm sure many would say "they used too". About the only thing that's changed over the years has been the jukebox. *When our bartender in her upper 30's, lower 40's went over to the jukebox after some old time regulars told her to play something, I was expecting maybe some Led Zeppelin or Lynyrd Skynyrd maybe even some Kid Rock but instead she rocked a trio of Lil' Wayne songs and I found that pretty funny. Great atmosphere and ambiance with a luxurious tavern burger aside some great fresh cut fries make Anchor Bar well worth the visit if in the area. Without a doubt one of my favorite burgers anywhere. It took about 10 minutes to get there from downtown Duluth. Please check back throughout the summer as we have many more 'Burgers of WI' to be featured. See ya next time. 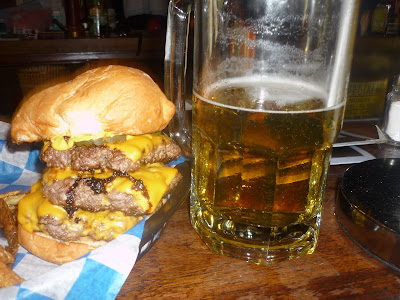 Glad you made it, "Up North" I can't wait to get back to Pete's this summer!