We have an announcement to make here at chibbqking. During the month of May, which is also national hamburger month, we will have all posts from it in 2011 dedicated to some great burgers around the country that I have consumed over the last year. In fact I've had so many burgers over the last 12 months that I would bet cash money with anyone who thinks they have had more than me. Seriously, I highly doubt it. So by all means, please stay tuned. The "five more..." series is an ongoing one here at S'C'&C and we will continue with that today as we chow down five more burgers from around Chicagoland. Eat up and enjoy!
________________________________________ 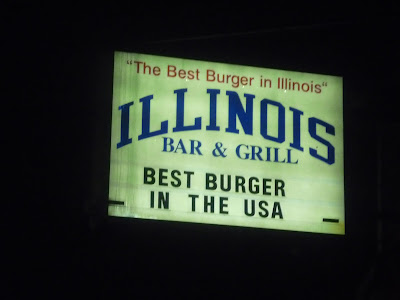 a locals favorite on 47th street out by Midway

Illinois Bar & Grill has long been a favorite of mine. I've been going here for a couple decades now. It was featured back in May of '09 on this site and I've been back there a few times since it's original post which can be found HERE. I found myself at IB&G a few months back late into the night one evening as I stopped in for a beer and burger with a friend. The place still has the same great vibe but has also updated their furniture and bar area. The smell of fresh cut wood is in the air now as they have redone the whole bar and seating area with new furniture managing to keep that old school vibe alive that so many love. On my last visit I had one of their classic and massive cheeseburgers taken up another notch with bacon added on. This bad boy can hang out with the greats. Check it out. 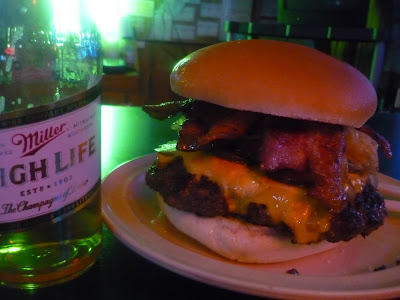 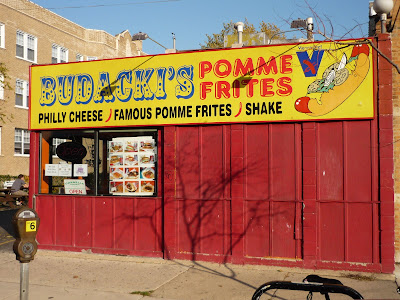 a locals favorite along Damen ave in Lincoln Square

Budacki's is another spot that has been featured here on the site. Back in November of '08 it was introduced as was the "KingT's Wing Fling" series which also featured the hot dogs from here. Well as it turns out they make a very good burger as well. The menu here is pretty solid as far as everything being good as long as that's what your in the mood for. So about a week back I found myself near Budacki's and in the mood for a burger. So I stopped in and gave one a try. I'm glad I did. A 1/2 pound double cheese with fries and a can of pop is just a little over $6 and worth every penny. They take two fresh patty's of beef and throw them on the grill and smash them down while cooking. They go onto a toasted sesame seed bun with the toppings of your choice. McDonald's, Burger King etc...wish they were like this. 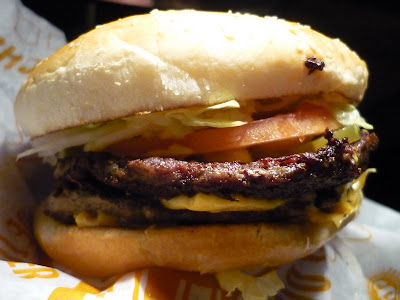 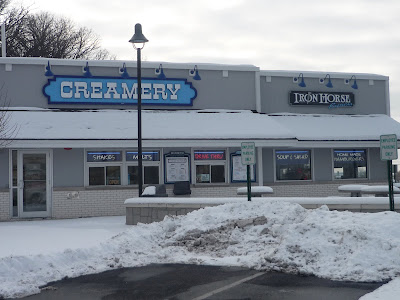 a small chain in the southern suburbs of Chicago

Last year around this very time I was out and about in the south suburbs and while out there I drove by one of these spots. The Creamery has seven locations around the Southern suburbs of Chicago and as I drove by one of them one day, the "Rainbow Cone Served Here" sign in the window caught my eye. Rainbow Cone is a Chicago southside tradition that will get it's day here on the site sometime this summer. Meanwhile these Creamery's that can be found serve Rainbow cones as well as their other homemade flavors, they also have a grill serving burgers etc...So I decided to give one a try that day and it was a-ok. Nothing too special but a very good eat for the less than $5 it costs. I didn't get to try any of their ice cream but I will if I ever pass one by in the summertime. 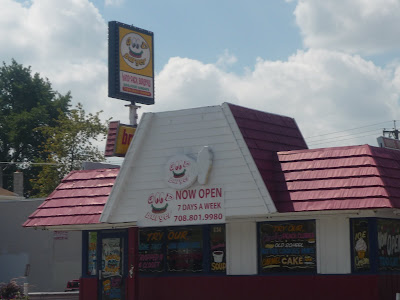 I was cruising thru Cal City when this place Good Burger caught my eye. The promise of hand packed patty's and specialty burgers was too much to pass up so I did a U-turn and headed in for a bite. The menu features a few specialty burgers as well as the regulars like chicken sandwiches, wings etc...It's located inside an old Bakers Square or something to that extent but I went in anyway. I ended up going with the cheeseburger with the works minus the ketchup which came with fresh cut fries. It wasn't anything to write home about. You can see the picture below. 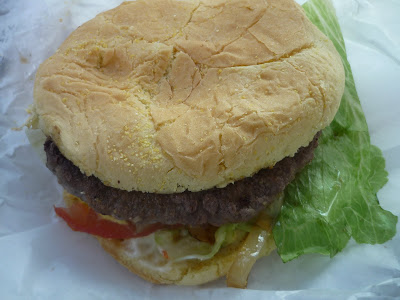 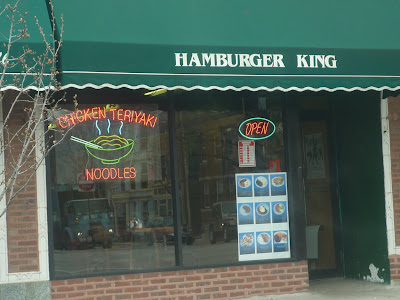 an old locals favorite in Wrigleyville

It's almost springtime which means baseball isn't far away. With that comes trips to Wrigley and Comiskey to watch some major league baseball. Hamburger King aka Chester's which is about a 10 minute walk from Wrigley Field has been featured on here before. It is one of my favorite breakfast stops in the city and you should really check out it's complete report HERE. It's so good and in my regular chowing rotation enough that it's actually been featured twice so check HERE too. It was Sunday morning and I was in need of something other than liquid in my stomach and Hamburger King came to mind. My thought was maybe it was time to try the massive heart fighting burger I had planned too for a while now so that's what I did. 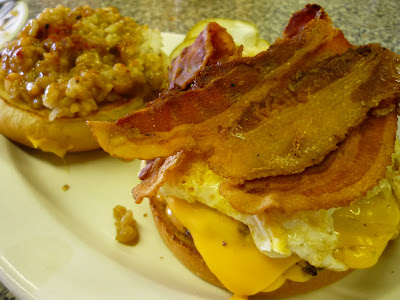 KingT's special at the Hamburger King

From the bottom up: Double cheeseburger with some aromatic grilled onions topped with two slices of American cheese which is then topped with a fried egg followed by two cooked 'til perfectly crispy pieces of bacon, and then all that is topped with some rice and gravy that is thrown onto the upper part of the hamburgers bun. Put together and enjoy! This is one of the baddest hamburgers in the city, don't mess with it unless you have been in battles with burgers like it before. 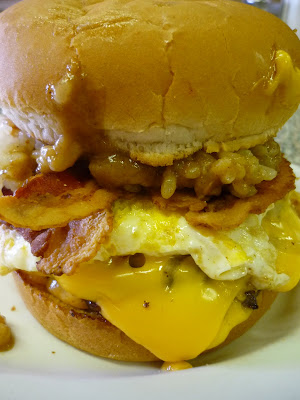