Well in case you live in a basement and hibernate there all winter never leaving or peaking out the window once, in case that is you or you live in Florida, you most likely know there's been some blizzards here in the USA in the winter of 2010-11. In fact we just had a massive one pass thru Chicago that pretty much shut the city down for a day and a half. People were so scared of the overhyped news that they were clearing out grocery stores as if Armageddon was coming. C'mon people, we live in Chicago, snow and even lots of it is not something new. Albeit it was a damn big snowstorn with thunder, lightning and the whole nine yards. I'm sorry but if you're one of the idiots that got caught on Lakeshore Drive and is now blaming the city, well your a fool. Maybe if you didn't do all your shopping at American Stupid, where it obviously rubs off on ya, then maybe you would of realized that LSD was the last place you wanted to be when the storm hit us. So unless you live in the lake, there were plenty of other ways home and you chose the stupid way. Sorry but that's on you. 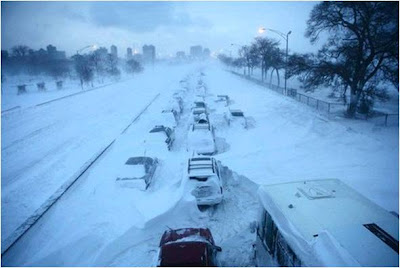 Northbound on Lakeshore Drive during the snowstorm (pic from: chicagofree.info)

So anyway now that I got the idiots outta the way lets get to the food. Well in blizzards like these one's we've had around the country you cant do much. I never even went to the grocery store and thus I was working with what I had as far as making meals during the aftermath. So I went into my fridge and this is what was concocted in my kitchen the day I was stuck inside on a snow day. I don't know why but I like breakfast most on days like these.
________________________________________ 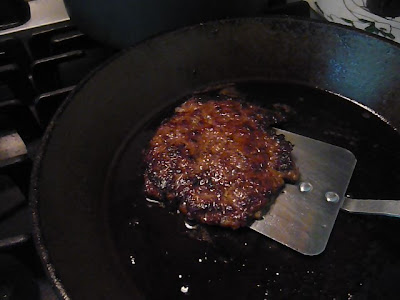 The patty getting its color 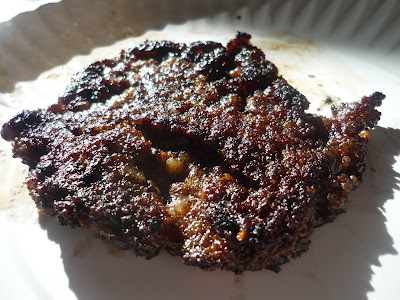 Sausage patty fried up and ready

1) Start off by cooking the biscuits according to to the package instructions. Then start making 1/4 pound balls of meat with the sausage, make enough patties so that you have enough sliders for all, one patty per slider. Butter up a flattop pan and throw the balls of sausage into it when ready. Take a heavy flat pan or spatula or anything that you can put a little force into and smash the sausage patty down as much as you can so it looks like that seen in the pic up above.

2) When all the sausage patties are made put them on a plate with a paper towel beneath them and then cook your eggs you your liking, I do mine fried. One minute before you take the egg off, put the patty on top followed by the slice of cheese and let it sit until it melts. Put it all into a biscuit and enjoy. 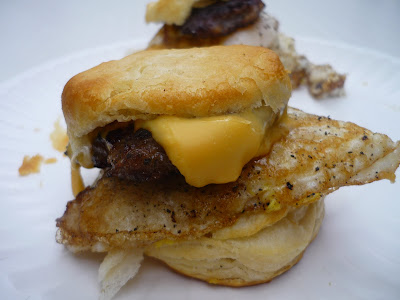 So I would guess that 3 out of 5 US households have Oscar Meyer wieners in their fridge. Personally I am not a fan of Child's play hot dogs but I do use them in my bbq baked beans recipe which can be found HERE. These dogs are crucial for my beans and its flavor profile so I do have them buried at the bottom of my fridge from time to time. I came up with this during the blizzard after I ransacked my refrigerator. Since most people also usually have eggs and bell peppers and onions, this is a good recipe for the starving.

1) Start off by cutting down the wieners into diced pieces. When that's done, throw some oil into the pan and saute the hot dogs and veggies for seven minutes or until done and then remove the mixture into a bowl. 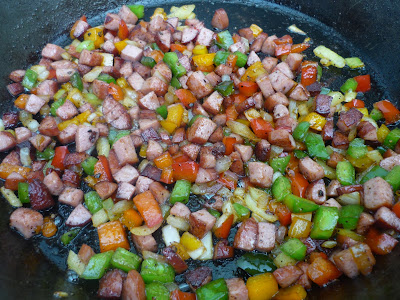 The insides of my scramble

2) Add more butter to the pan and take your scrambled egg mixture and make the eggs in the pan. Just before ready add the bowl of meat and veggies in with the eggs and top it with cheese and enjoy. 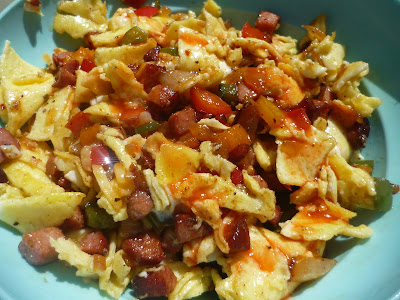 I love me some shrimp and grits and although this is a typical breakfast/brunch in the south, it's what i had for dinner the night of the blizzard. I'll eat shrimp and grits anytime of the day however, its always good ya know? Over the years I've experimented with a few different recipes and last year I tried one from Serious Eats and it became my go to when I want some shrimp and grits. Nick Kindelsperger hooked this one up! I love it. Her is some video of it.