Happy President's day to all. With that I figured we take a trip down to Central IL around the states capitol, Springfield. The Land of Lincoln has been featured on here before and you can see all the past stories by clicking "Springfield" under the tags. I love going around eating the specialties of different regions and seeing what they have to offer the food world. I had been very interested and intrigued by this thread over on LTH. Since this thread on Central IL was started so much useful information was supplied by the OP and the others who have joined in on it. As intriguing as fried turtle sounds (it's one of their specialties), there just hasn't been enough good said to make me want to really try it. Within the same discussion Buffalo fish has been brought up. It's another animal they live off of straight out the river. 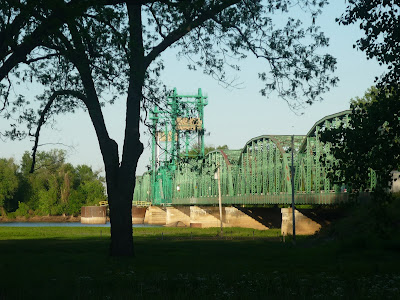 A bridge to take cars over the river

Upon reading about Buffalo fish I was instantly intrigued and had been wishing to try some since. Within time (During May of 2010) we were headed down the Illinois River Road for some food exploration en route to Springfield. I did a good chunk of the WI River Road (To be featured soon) and gotta say that it is much more scenic than ours. There really isn't alot going on both food and people wise. We drove thru Beardstown and it was the first somewhat not dead spot along the road. My buddy who's done alot of campaign work on the trails of IL said that there's a chicken processing plant in Beardstown and many if not all of its residents work there. Many of the small town population is Mexican so we spotted and were tempted by a few grocery stores with taquerias but wanted to find what we were on our mission for. Unfortunately Star Cafe which came highly rec'd for Buffalo fish is now closed... 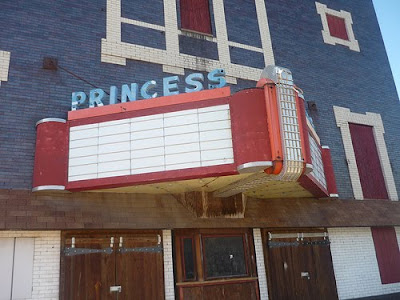 ...So is the local theater like in so many other small American towns

But my buddy used to work for Gov. Thompson and he knew of a spot in Detroit, IL located in Pike County which is the deer hunting capitol of the state. We made our way there and upon crossing a drawbridge drove into the town of 100. Just like the last few stops there was nothing going on here. My buddy made a call and was told the place we were looking for (called Woodies by him) was at the other side of the drawbridge and right before the town of Detroit (in what I learned is Pittsfield) so we had overshot it. Right after crossing the bridge seen above you make a right into the lot with a place located along the river. 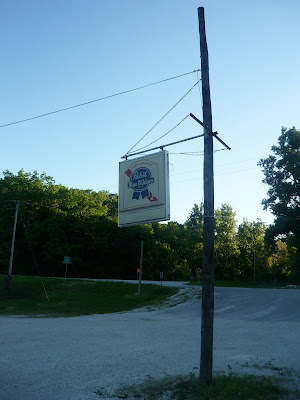 The entrance into the camouflage bar

So on we went into the place where Governor Thompson and his right hand man would take the helicopter to on weekends when things in the office were going easy, they would go grab a buffalo sandwich from E&W. Since Detroit has only 100 people and not much else near it, upon entering the 13 or so regulars all glanced over and wondered who we were. This is a pretty big bar and there are 15+ tables outside along the river. 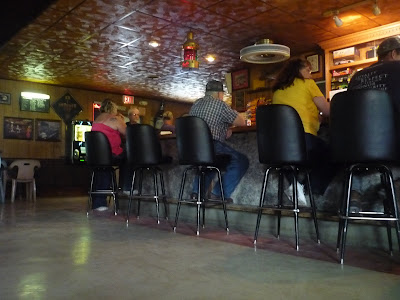 Half of the people that go to E&W's on wkds

We took a seat at a table and got some High Life's and asked if they had Buffalo fish sandwiches and she said "not uh hun, only on weekends" Well aint that a bitch! We came a ways and I really wanted to try some but it wasn't going to happen here. I got some catfish instead and the bartender went back to get it prepared and one of the self described "alcoholic regulars" was celebrating his 26th bday and was really into the spirits of it. We got a "where the hell y'alls from" from him and I said "Chicago" and he said "sorry" but that was about it as far as intimidation. He asked us what we were doing down there and we said we were looking for some Buffalo fish. So he came over and talked us up for about 10 mins and the conversations and quotes and actions were anything from boring. Lets just say the bday boy was a character. 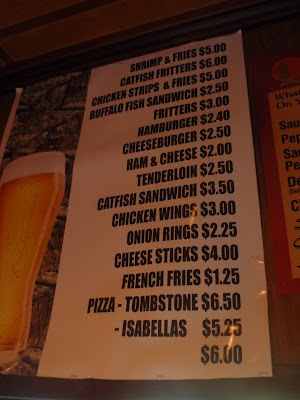 The menu at Ed & Woodie's

However he was a nice dude and simply explained that hes country, he likes what he does (contracting and hunting, fishing etc...) and where he lives and that's fine by me. Later on his dad couldn't believe we drove from Springfield for a buffalo fish sandwich, even though we were going to Springfield, we drove from Chicago. Most people would find that crazy too...I asked about the buffalo and he was happy to talk about it. They told us that they only do them on weekends because there isn't much going on during the weekdays. The fact they served food at all during the weekdays was described as the yocal as unique since the people at the bar were pretty much the only ones that go there on weekdays. We were told that on weekends people come from around the way to sit outside by the river and drink and eat and see some live music when they have that going on and of course eat Buffalo fish sandwiches which they all seemed to really love. I became even more intrigued by them by how good this places catfish was. I don't usually order catfish but this stuff was perfectly breaded and cooked. 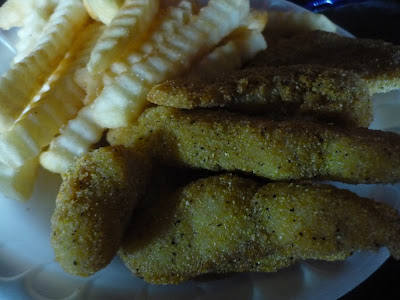 So after our trip down the river we headed on over to Springfield where we would be staying for a couple nights. My buddy had some work to do so I set off on a foodventure throughout town. After he was done with work, I picked him up and he asked "what we were doing for food?" Oh man I just ate a ton seen on this site and coming soon. So I was pretty damn full but he wanted to take up on the offer the chef at the Gov's Mansion made to us. When we talked to him of the Buffalo carp he said that we could get it from a local fish supplier which he gave us the address too and bring it to the mansion and he'd cook some up for us. It was an offer we couldn't refuse but since the house was in session he had a last second thing he had to do and was super sorry to cancel but did leave us with this bit of info "seek out the West Woods Lodge, they may have it" and so we did. 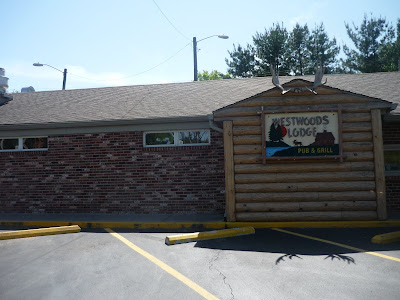 a locals favorite in Springfield, IL

A lady who works with my buddy said her husband loves the pizza here and since we got the tip above about Buffalo Carp we headed over to see whats up. Picture a place owned by a big time hunter. A place where the walls are decked out in stuffed animals (not the ones kids like) that were shot by him on trips around the world. This Northwoods type lodge/bar is exactly what you have pictured in your head. It was our lucky day as we spotted on the menu Treadway Lake Buffalo Carp. So I had to order it. They also have Springfield's own horseshoes with buffalo, elk or crawfish here. Oh and we also got a pizza, why not right? at this point I might as well eat all night into the morning. 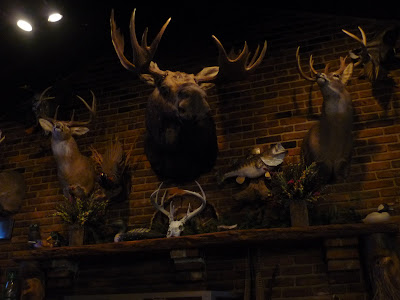 I was so full I didn't think I would eat much of this sandwich and then this massive plate pictured below comes popping out. Well I manned up and started digging in. Before I knew it I had eaten a sandwich of it and pretty much every piece of flesh off the skin. It was different as far as the looks and handle but the super flaky flesh was perfectly breaded and pulled off really easy. I was able to get a picture (and taste) of what this Central Illinois delicacy is all about. I would love some right now, very much enjoyed it. Traditionally the fried buffalo fish is served with fries, rye bread and raw onions. You make your own sandwich as it arrives. 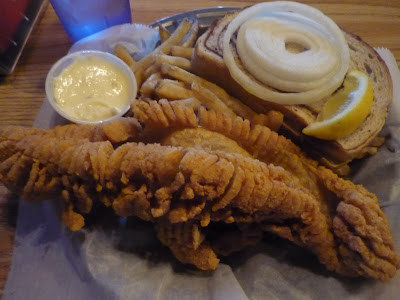 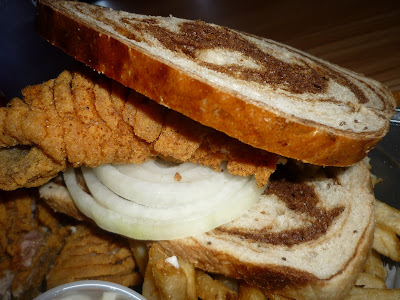 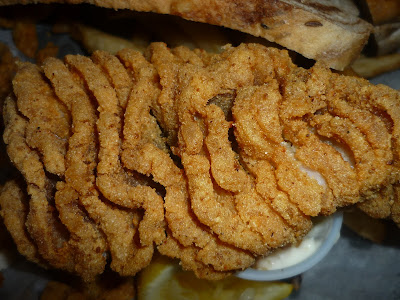 I loved it, really flaky

What about the pizza? Not bad at all, pretty damn good. It did me real well at 3 in da morning later that night. I wish I could go on and remember more but I'm in a haze. I ended up watching the Blackhawks at a locals bar called the Curve Inn while my buddy schlepped with _____. I then ended up doing shots with some biker gangs and some CPD in town for a memorial until 3a. Why was the bike gang drinking Jager and the popo drinking rumpleminze? neither of that shat is tough. You better believe I called them out on it as I threw down my Jameson and celebratory (cinco de mayo) tequila shots. Quite the evening at the old Curve Inn, like you get in the movies when the characters walk into a random bikers bar. Except I guess they all liked me. 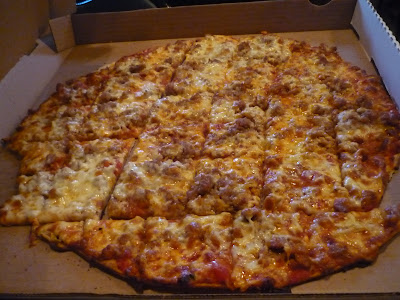 great report as always Titus, you are the road food king.

This post was quite entertaining, I'm smiling picturing you guys walking into that restaurant and everyone turning their heads going "Who the fuck are these guys?" Thanks for the report.

Ed & Woodies has changed hands. It is now The Riverbank owned by Doug Daniels. Located East of Pittsfield on Illinois River at Florence, IL. Draw bridge built in 1930 still operational. Grounds still beautiful full of deer and small animals grazing on the banks. Barges still go up and down the river. Enjoy your meal by watching all in amazement. The inside and out are newly renovated. Exquisite dining experience. Friendly down home folks. You will thoroughly enjoy. Plan a visit soon. You will love it and want to return over and over again.