If you come looking for Super Sunday recipe ideas you need look no further. Despite conference championship Sunday being tough on me and Da Bears and having to listen to idiots question our QB's toughness, I am as always excited for Super Sunday. In the 3rd annual chibbqking Super Recipe post we go with a regional feel and cook up some popular recipes from different parts of the country including a few straight outta Texas where Super Bowl XLV will be played. 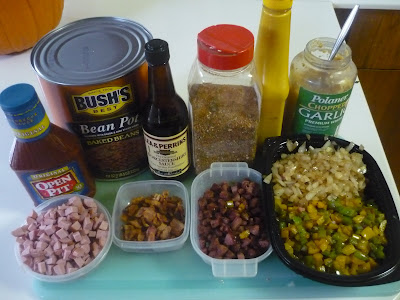 The ingredients ready to be thrown in the pot

1) Start off by sauteing the bacon pieces (in the pan you'll use to make the beans) until crisp. Remove them and let dry on a paper towel and then add the peppers and onions and saute for 5-7 minutes and then add garlic and the Worcestershire for two more minutes. Remove the trio and add any other diced meats you are using like the hot dogs and sausage and cook them until they are browned.

2) Once everything is removed start off by pouring the can(s) of beans into the pot. Add in the trio of veggies along with the diced meats but hold on the bacon. Mix it together and then add in the bottle of Open Pit until the brew reaches the right texture which is stew like. Once you got that good to go add in the mustard (by the TBSP) and BBQ seasoning and adjust to taste. 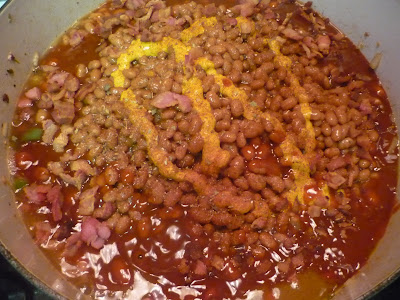 3) Set heat to low and let simmer for two hours. Serve when ready. 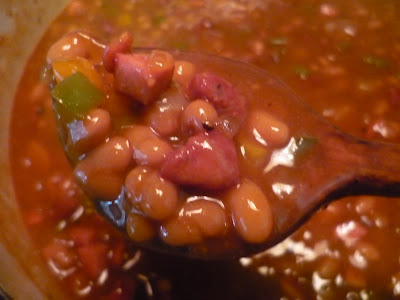 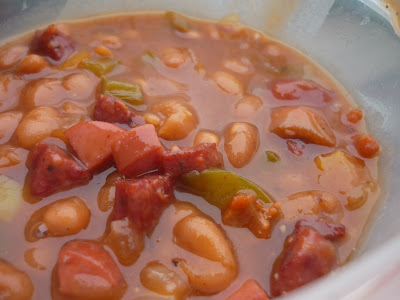 I made a Mexican casserole inspired by Homesick Texan, which is a great Tex-Mex blog, perfect for Sunday's and giving ideas for what to make for the Super Bowl. 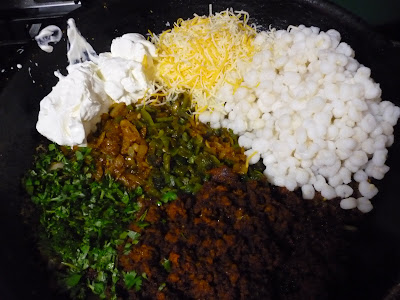 I took three tubes of Mexican chorizo and cooked it in the pan until crispy. Once done I removed and threw in a whole sliced medium onion and a couple chopped fresh jalapenos and some chopped garlic and sauteed that up until done. I then took them out and threw 2 cans of drained hominy into the pan along with about a half cup of chopped cilantro, half a container of sour cream, half cup of shredded Mexican blend cheese, the chorizo and onion/pepper/garlic mixtures and the juice of a lime. 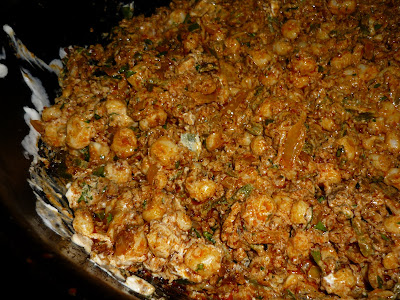 Mix it all together in the pan 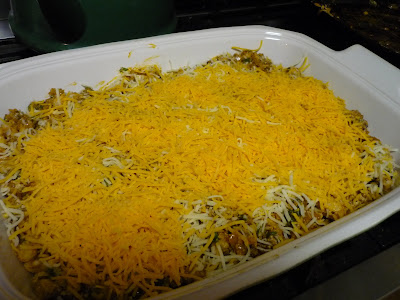 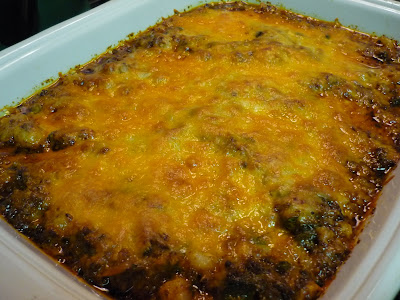 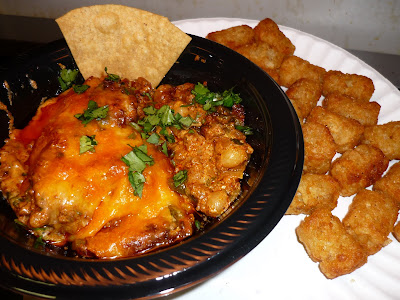 These little app's are great for gameday and getting started, we've been enjoying them over Thanksgiving in my family for years. My cousin is the mastermind behind these simple but succulent snacks. I always thought they would make a great Super Bowl munching snack, perfect for a little bite to pass around before the game. Check them. 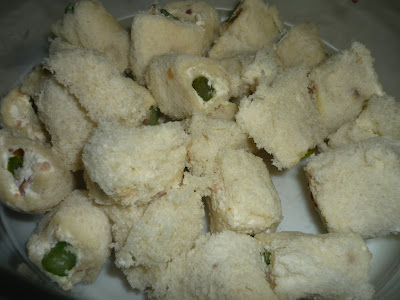 1) You need to start out by frying up the bacon until nice and crispy. Let it cool down on some paper towels on a plate and then crush it up into tiny little pieces in the paper towel and set aside.

2) Remove the crust from the slices of bread and then layer the cream cheese onto each slice. Sprinkle them with the bacon bits and then layer a roll of asparagus on each piece and roll them up. Cut them into bite size pieces, usually about 2-3 per roll. Melt a half stick of butter in the micro for 10 seconds and then coat the rolls with the melted butter and put them under a broiler until browned.

3) Pass them around and enjoy da game 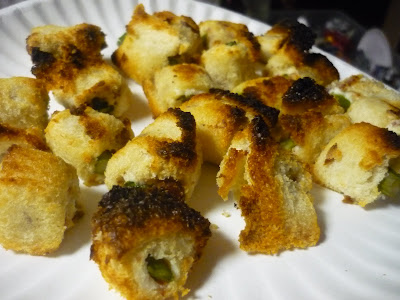 This recipe was concocted by me over the summer after I got quite a few sausages from my uncle from when he went down to Dallas. There's a great grocery chain that every region should be fortunate enough to have down there. It's called Central Grocery and they have some great products that more places should carry. One of those things I got was some Spanish chorizo sausages which after a little research online had me making these skewers with them in no time. 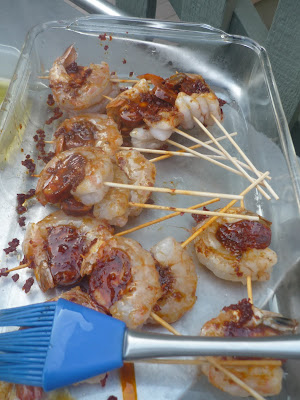 Skewers ready for the grill

1) Rub the harissa paste over your peeled and deveined shrimp evenly and set aside. Slice the chorizo into 1/2-inch thick slices. Place one chorizo slice into the crook of each shrimp and thread onto a skewer, like those seen above. Add a bay leaf to each skewer and refrigerate until ready to cook.

2) Preheat the grill or grill pan to medium-hot. Brush the skewers with a little olive oil and cook for 5-6 minutes, turning once, or until the shrimp are translucent and the chorizo cooked through. Enjoy immediately. 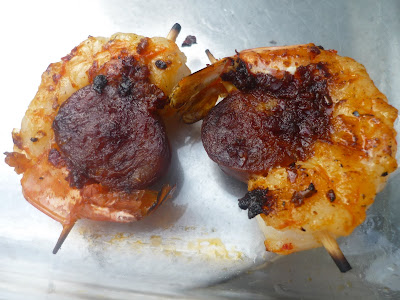 Well we have no New England Patriots in the Super Bowl this year, and that's fine by me. But I'll admit, I did have a recipe ready just in case they made it. American chop suey is a popular regional eat out in the New England area, and another thing I'll admit, I enjoy it. It's just a combo of macaroni with a ground beef, sauteed peppers, onions and tomato mixture with everyone having their little tweaks they use to make it. Good winter comfort food is what it is and the fact it can be made easily and serve a crowd makes this great gameday grub.

- 3 lbs ground beef
- 2 onions, 4 bell peppers, 5 sticks celery, 3 garlic, all diced down
- 1 package elbow macaroni
- 1 can chicken or beef broth
- 2 cans diced tomatoes (I use fire roasted)
- 1 can tomato sauce
- seasoning like salt, pepper and whatever else floats your boat

1) Start off by cooking the elbow mac according to the package. While cooking the pasta, brown the ground beef in a oiled skillet until cooked thru. You want to break it down like taco meat. Add a little seasoning and set aside in a bowl when the meat has cooked thru.

2) Add more oil to the skillet and throw in the peppers, onions and celery and cook until translucent and then add in the garlic for the last minute. Stir in the tomatoes, the sauce and broth, cooked macaroni, ground beef and seasonings and then cover the skillet or pot and let it simmer for 20 minutes.

3) Let the pasta sit in pan and people can serve themselves out of it. 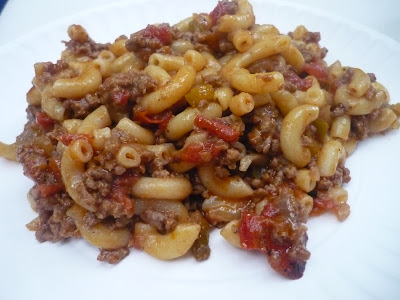 It's a damn shame da Bears wont be in Super Bowl XLV but I had a recipe ready just in case. Throughout Chicago and it's Italian restaurants and pizza joints you will find baked mostacholi on the menu. It's a Chicago thing, everyone enjoys it and I remember some catered Super Bowl parties from my youth where they had this classic American pasta dish was served.

Note: You need a good amount of red sauce for this, I always make my own but using more than the ingredients say cant hurt and will guarantee its perfect. Garlic bread goes great with this.

1) Preheat oven to 350 degrees. In large skillet combine green peppers and onion. Cook until ready. Stir in spaghetti sauce, tomato sauce and broth. Bring to a boil, then simmer 15 minutes.

2) Pour 1 cup of meat sauce mixture into the bottom of a large baking dish. Top with half of the pasta. Add in the ricotta cheese and spread out evenly. Then a layer of 2 cups of mozzarella cheese and all of the Parmesan cheese. For the next layer, add 2 cups of sauce, remaining pasta and the rest pf the mozzarella cheese. Top that with the remaining sauce and add to oven. Bake in the oven for 35-40 minutes until hot and bubbly. 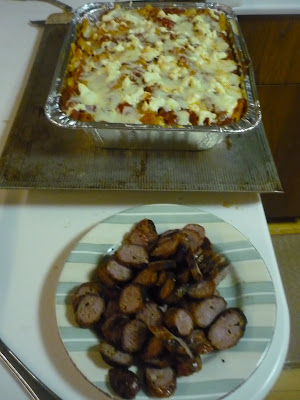 3) Remove from the oven and add the sliced pieces of sausage on top followed by a little more of the red sauce and serve. grate with cheese 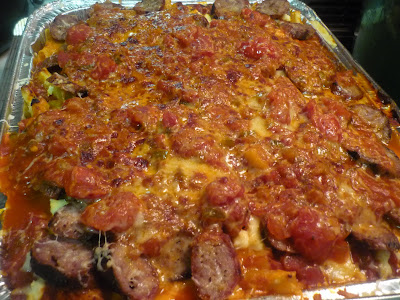 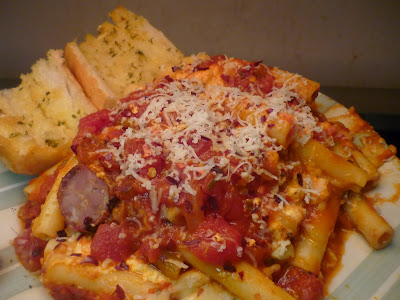 Well I knew one thing about who would be playing in SB XLV and that was either the Bears or the Packers. Let's just say it wasn't who I wanted and we'll leave it at that. I do however have a recipe as a tribute to the 'sconnies headed to Dallas. We in the Great Lake's region enjoy fresh caught lake perch from our waters and Friday fish fry's are big in Wisconsin. 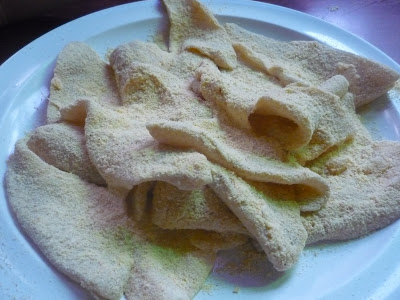 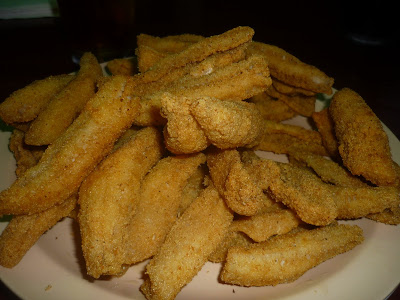 I made this recipe one day from a classic chili cookbook. Released in 1980, Chili Madness by Jane Butel is must own material for any chili enthusiast especially those that like cooking up a big bowl on Sunday during football season. You can find the book for sale online at Amazon right HERE. I would recommend owning it as this recipe from the book won the 1978 World Championship cookoff held by the International Chili Society. LaVerne Harris aka Nevada Annie's special advice to the cook is to make sure you add the most important ingredient - "lot's of love". 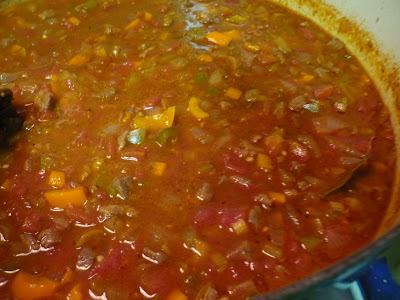 Nevada Annie's award winning chili simmering away in the pot 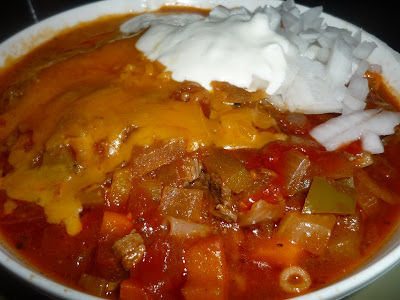 I made these one night with a fully cooked brisket I got from the HEB Market in Dallas, Texas. They sell fully cooked and professionally smoked briskets down there and I have worked with a few of them over the last year. Believe it or not they are actually pretty damn edible but I would rec' using them in dishes like tacos and chili. 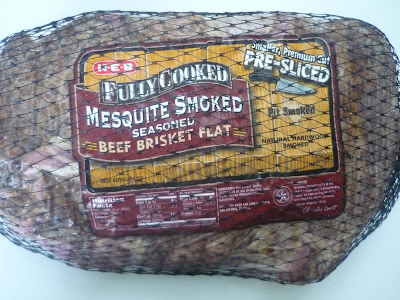 1) Cook brisket according to package. When ready make sure to heat the tortillas thru and allow people to dress the tacos to their liking. 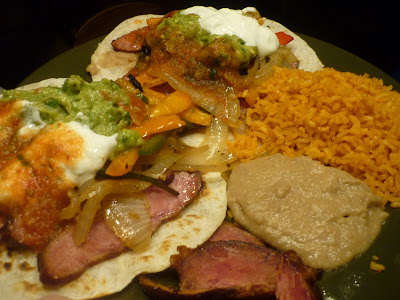 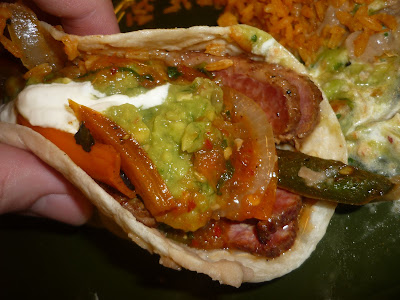 Now if all these super stuffers weren't enough for you then do yourself a favor and check out the menu from the past two years by clicking on the links below. Happy eating.

awesome post! everything looks amazing. i would totally tackle those Brisket tacos and the tator tots with mexican casserole. wow!

Sorry about the NFC lost but the Bears had a great season anyway.

When are we getting married? I cant wait any longer!!!!! lol